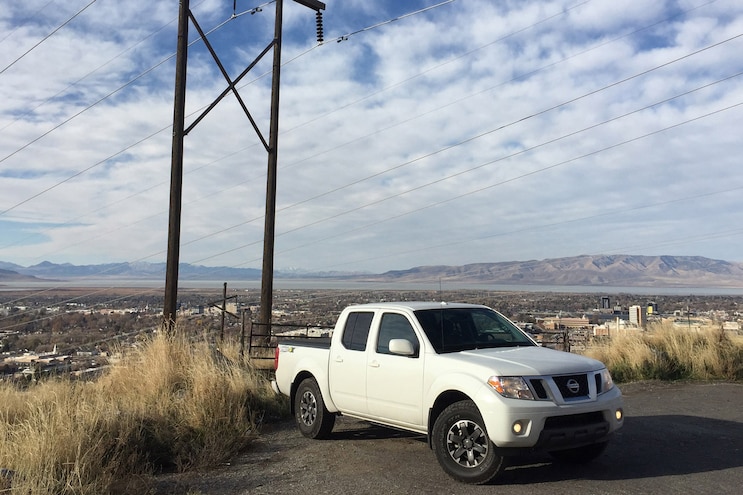 In 2015, General Motors shook up the truck industry by offering the first all-new midsize pickup in about a decade. The second iteration of the Chevrolet Colorado and GMC Canyon wowed us with their comfort and refinement, and after spending some time with them, we felt confident in declaring them best in class.
That said, it had been awhile since we’d given one of the GM twins’ competitors any seat time, so we ordered up a ’16 Nissan Frontier to see if the smallish midsizer could keep up. After more than a year and 20,000-plus miles in the driver’s seat, we’re here to say Nissan’s entry passes muster just fine.
Foremost, allow us to get some obvious criticisms and complaints out of the way. The Nissan Frontier was last redesigned for the ’05 model year, meaning our Pro-4X tester was riding on a platform that was 11 years old. With such aging bones, we weren’t surprised the truck offered such unremarkable fuel economy. Indeed, with average overall efficiency hovering around 16 mpg, the Frontier’s eco quotient is lower than many fullsize trucks, including its long-term stablemate, the 6.2L V-8–powered GMC Sierra 1500. 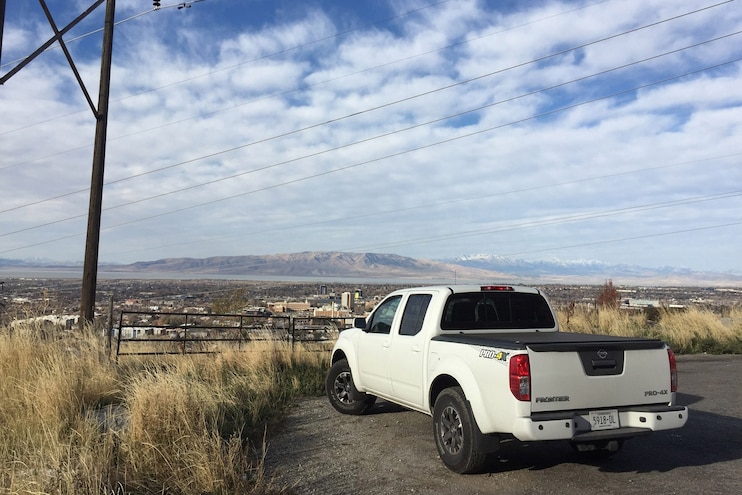 View Photo Gallery | 6 Photos
Photo 2/6   |   2016 Frontier Long Term Report 4 Rear
Another (obvious) chink in the Frontier’s armor is its aged interior. The dashboard, center console, and door panels are covered in thick, hard plastic, with soft-touch only making an appearance on the door and center armrests. Commendably, these hard plastics showed little wear after our one-year test, but they also offered zero cush when we wanted to hang an elbow out the window. To be fair, a good amount of hard plastic appears in the cockpits of the Frontier’s competitive set. 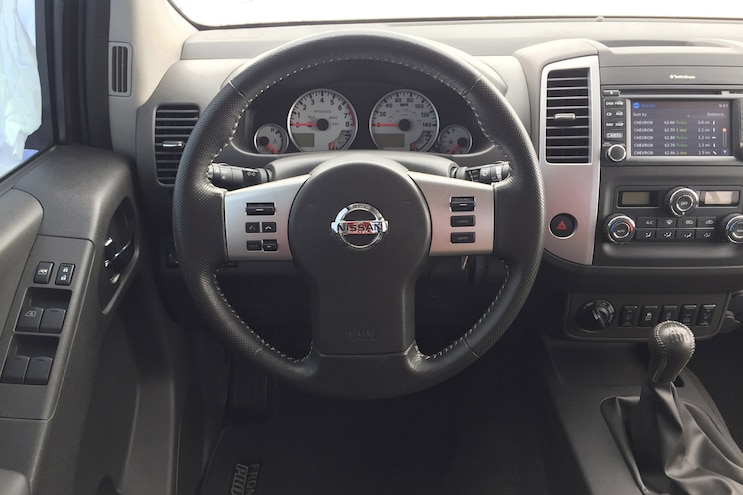 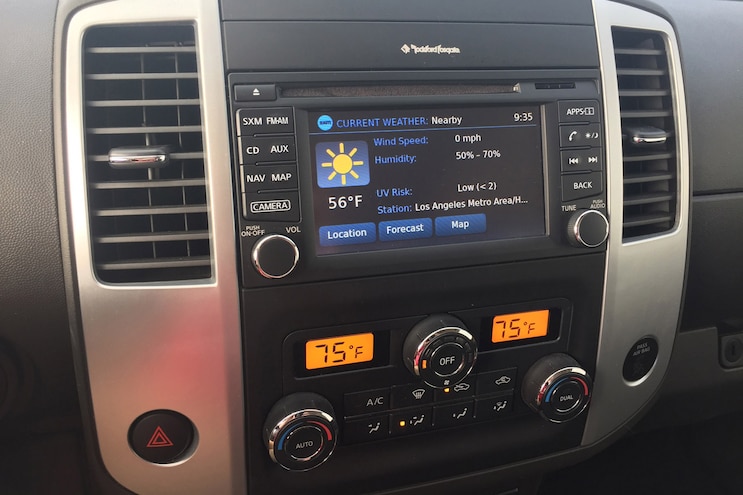 View Photo Gallery | 6 Photos
Photo 4/6   |   2016 Frontier Long Term Report 4 Center
Those niggles (and they are insignificant) out of the way, we found a lot to love in the Frontier. Foremost, we were impressed with its bargain pricing. With a few options, its as-tested sticker cost was $33,240, and its base price of $31,640 undercuts the Toyota Tacoma TRD Off-Road and Chevrolet Colorado Z71 by several thousand dollars. The low price doesn’t portend low capabilities either, as the Frontier got us off the beaten path several times over its tenure at Truck Trend, with impressive chops in both desert running and lower-speed rockcrawling aided by a locking rear differential and Bilstein shocks.
Another pleasant surprise came in the Frontier’s impressive garageability. Since moving from one editor’s home in suburban Los Angeles to another editor’s apartment right downtown, the Frontier’s nippy size was much appreciated. And unlike its competitive set, the Frontier features big, square windows and a high-up seating position that aid visibility in parking and driving in tight confines. City-dwellers who need or want a truck would find the Frontier a much easier fit than other midsizers. 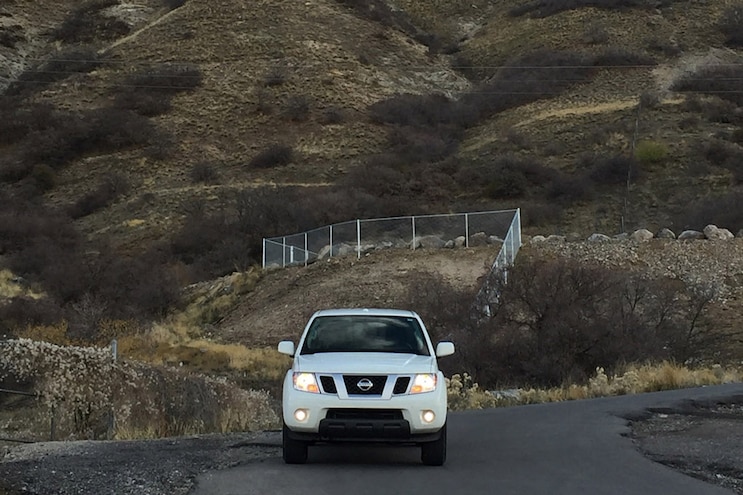 View Photo Gallery | 6 Photos
Photo 5/6   |   This compact pickup had some long legs, as evidenced by some high-mileage trips to visit family in Utah, Northern California, and Nevada.
The smallish exterior resulted in a too-short bed and nearly uninhabitable rear seat, but front-seat accommodations were first-rate. Compared to the redesigned Tacoma, the Nissan’s height-adjustable driver seat was like a La-Z-Boy chair, although this author complained about an overly aggressive lumbar support that caused back pain after an admittedly long journey. Much appreciated on said road trip was the Frontier’s quiet, smooth ride and excellent stereo system, which is unfortunately trapped in a too-old infotainment system and saddled with Bluetooth voice commands that never heard our prompts correctly.
Overall, we found a lot to love in the Frontier. The six-speed manual transmission was fun to operate, the torquey 4.0L V-6 felt (and sounded) powerful under full throttle, and the Pro-4X’s suspension setup provided a comfortable, composed ride even on bad pavement. Its bottom-dollar pricing was the cherry on top of what is still a compelling, surprisingly competitive sundae. Though a Methuselah in the truck world, consider the Frontier a wise old salt, not an enfeebled has-been. 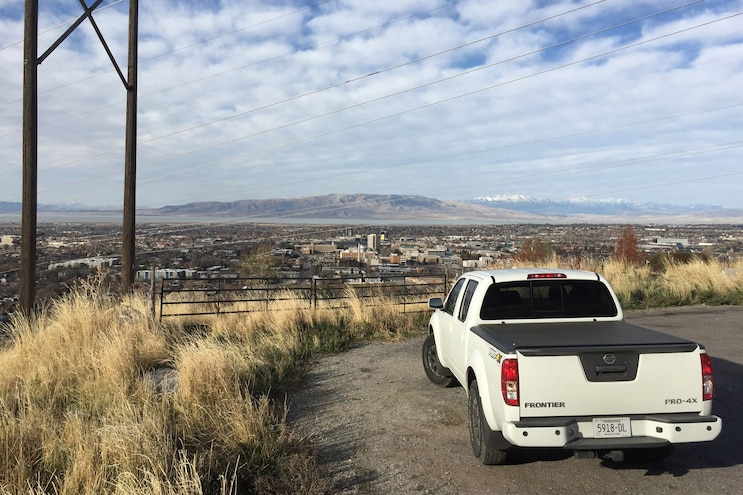 Previous report(s): May/June ’16, Sept./Oct. ’16, Jan./Feb. ’17
Base price: $31,640
Price as tested: $33,240
Long-Term Numbers
Miles to date: 20,821
Miles since last report: 4,071
Average mpg (this report): 16.08
Test best tank (mpg): 21.02
Test worst tank (mpg): 13.15
Test Maintenance:
Oxygen sensor replaced at 1,500 miles.
5,000-mile service, oil change, and tire rotation
10,000-mile service, oil change, and tire rotation
Handbrake adjusted at 11,200 miles
15,000-mile service, oil change, and tire rotation
Test Problem Areas:
Oxygen sensor replaced under warranty
Handbrake adjusted due to inadequate hold on hills
Logbook Quotes:
“Bluetooth voice commands never understand what I’m saying, so I usually end up using Siri to navigate or make calls.”
“Still can’t get enough of this engine note. And paired to a six-speed manual, no less!”
“I can’t fit my motorcycle in the bed, and the bed extender’s angled corners are no help either.”
“Some back pain after a long stint in the saddle. I wish the front seats’ lumbar support wasn’t so aggressive.”
“I saw a brand-new one of these at the dealer marked down $3,000. Just more than $30K for a brand-new midsize pickup with four-wheel drive and an off-road package strikes me as a very good deal.”