Jeep’s Compass Goes from Afterthought to Front and Center 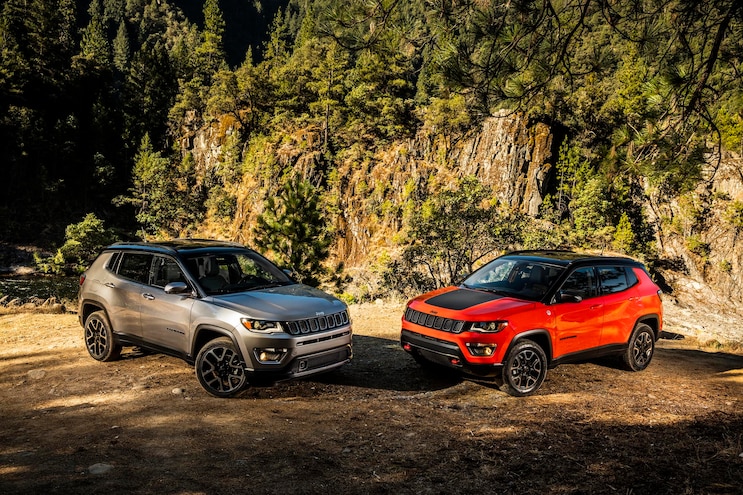 Going on close to a decade with no major mechanical changes, the outgoing Jeep Compass was often the butt of jokes of automotive journalists, and even got exasperated acknowledgement from Jeep that it was one of the most dated and uncompetitive models in its lineup. For a time, there was even speculation that it could be dropped altogether after the introduction of the Renegade. However, the space that the Compass competed in, the compact crossover segment, was too significant to ignore, both globally and domestically. It also bridged the price, size, and style gap between the Renegade, and the larger Cherokee. The new Compass is finally here, and based on our first drive, it is definitely worth the wait.
Shuffling the Deck
You may have noticed there’s one name we haven’t mentioned so far. That’s right, the Patriot, the Compass’ boxier sibling. Going forward, the Patriot is no more. The Renegade is that model’s de facto replacement, slotting in slightly below the new Compass in price and mission. The new Compass shares its basic underpinnings with the Renegade but rides on a slightly longer wheelbase and has a longer overall length. Size-wise, the Compass is shorter than the latest-generation Honda CR-V and Toyota RAV4, two models that are listed as key competitors by Jeep. The case could be made that the larger Cherokee is a more logical competitor to Japan’s crossover kings. However, the Compass is a uniquely stylish and sporty proposition in the crossover segment, with a larger size and higher level of content and refinement than models like the HR-V, Mazda CX-3, and Toyota C-HR.
Surprising Sophistication
The new Compass follows the trend we’ve witnessed across the industry of a higher level of content and features being offered on more entry-level models. The Compass certainly doesn’t skimp on features, offering such available amenities as a power liftgate, LED taillights, heated leather seats, available dual-pane sunroof, and up to an 8.4-inch Uconnect touchscreen headunit. And the sophistication goes beyond just superficial bells and whistles. The new Compass features Koni frequency selective damping struts to isolate high-frequency impacts, as well as triple-sealed doors to minimize wind noise. The difference in refinement between the new and outgoing model is stark. 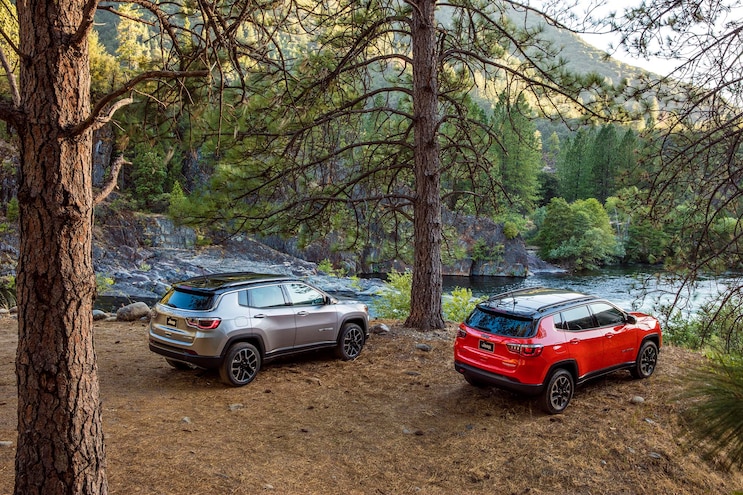 View Photo Gallery | 84 Photos
Photo 2/84   |   084 2017 Jeep Compass Limited Trailhawk Rear
In terms of styling, the Compass shows a strong and deliberate resemblance to the larger Grand Cherokee. The outgoing model applied a Grand Cherokee–looking nose as part of its mid-cycle refresh but never had the aesthetic cohesion to make it all work. The new model is a stylistic whole from bumper to bumper, with a trim, athletic, and subtly aggressive look.
In a nod to the brand’s off-road focus and heritage, the Trailhawk model, offered for the first time on the Compass, includes a fullsize spare tire, a rarity in the crossover class. Other Compass models get a space-saver spare or inflator kit.
Shifty Business
Unlike many other models in the crossover class that have gone fully automatic, the Compass still offers a manual transmission, and yes, you can get a manual 4x4. Disappointingly, that combination is not offered on the Trailhawk. All Compass models get FCA’s ubiquitous 2.4L Tigershark MultiAir I-4 engine, making 180 hp and 175 lb-ft in this application. Sport and Latitude models get a choice of six speed manual or automatic transmissions, with the Limited and Trailhawk getting a standard nine-speed automatic.
The Trailhawk, like on the Renegade, does offer a virtual “low range.” However, its crawl ratio of 20:1 is nowhere close to that of other Jeep models with a true stepped, geared low range such as the Cherokee, Grand Cherokee, and obviously, Wrangler. On our off-road course in the Trailhawk, we found the best way to traverse rugged terrain was simply to use generous throttle to make use of the engine’s modest power, which was further emphasized by the Trailhawk’s somewhat porky 3,600-plus-pound weight. While we’re confident the Trailhawk has the goods to get out of most situations it’ll likely find itself in, if you plan on doing regular off-roading beyond snowy, dirt, and gravel roads, you’d probably be better served by one of Jeep’s other models.
Global Player
As popular as the Compass has been and will continue to be in the U.S., it is a far more significant model to the brand in emerging markets such as Latin America, Asia and Europe, where C-segment crossovers are one of the hottest and fastest-growing vehicle segments. Jeep is staking much of its global sales success on these emerging markets. It’s worth noting that the new Compass launched first in Brazil, before its U.S. debut. The rest of the world also gets such options as a 2.0L turbodiesel I-4 with a tasty 280 lb-ft of torque. Don’t get your hopes up for a diesel option for the Compass in the U.S.
Value Leader
Although the Compass is being positioned just above the Renegade in the Jeep lineup, its mission will continue to be that as a value-oriented model in the lineup. For those whom the Renegade is too small, and the Cherokee is too expensive, the Compass strikes a compelling option combining some of the best attributes of both models with a unique style all its own. And finally, it has the content and sophistication to not feel like a compromised choice.
2017 Jeep Compass
Vehicle type: Compact CUV
Base price: $22,090
Price as tested: $29,690
Engine: 2.4L fuel injected, 16-valve SOHC I-4
Transmission: 6-speed manual, 6-speed automatic, 9-speed automatic
Horsepower: 180 @ 6,400 rpm
Torque: 175 lb-ft @ 3,900 rpm
Curb Weight: 3,184-3,633 (FWD-AWD)
Towing capacity: 2,000 lbs
EPA mileage rating (AWD/FWD): 22 mpg city/30-31 mpg highway