Worth Its Weight in Gold 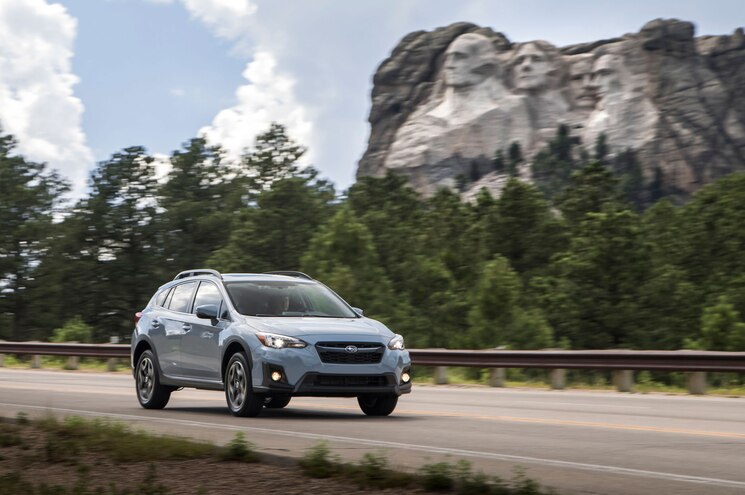 Ain’t no more gold in them well-mined Black Hills near Deadwood, South Dakota, unless you count the smooth, twisty pavement and gravelly dirt roads. That’s where we got behind the wheel of the all-new 2018 Subaru Crosstrek for the first time. 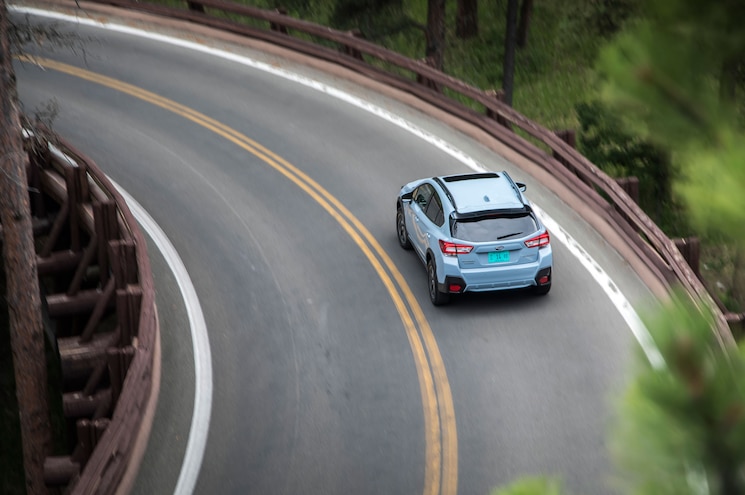 View Photo Gallery | 53 Photos
Photo 2/53   |   2018 Subaru Crosstrek Exterior Rear Quarter 02
There is, however, hidden treasure buried inside the 2018 Crosstrek in the form of Subaru’s all-new global platform, which will underpin the upcoming Ascent three-row SUV and all future Subaru models save the BRZ sports car. Subaru worked higher-strength steel in the completely redesigned frame that includes stronger joints and a lower center of gravity, all of which means improved collision absorption. Additionally, the all-wheel-drive Crosstrek gets an increase in torsional rigidity and a completely redesigned front and rear suspension that delivers much-improved handling and significantly reduces any vibration that’s coming from the wheels through the frame. 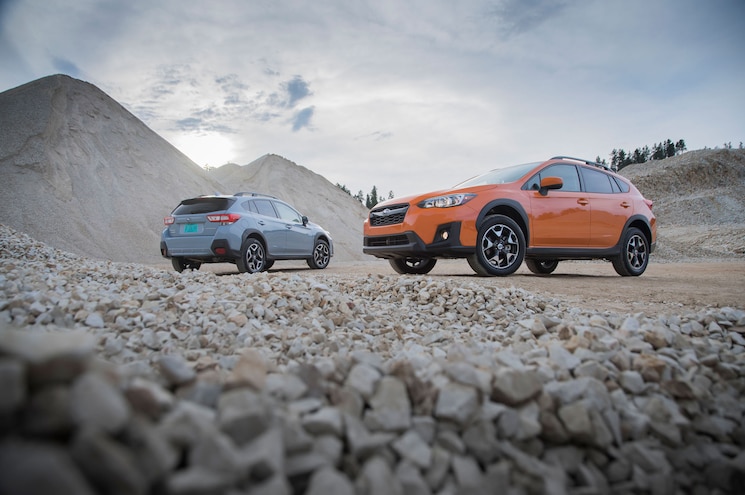 View Photo Gallery | 53 Photos
Photo 3/53   |   2018 Subaru Crosstrek Exterior Front Quarter Static 03
The improvements show up as soon as the driver sets out to blaze their own trail, whether paved or off-road. The ride is smoother and control is better (though the standard tires on the base and Premium models (mounted on 17-inch wheels) are prone to squealing around corners, even at standard speed limits). And the increased comfort is noticeable. The Crosstrek is now a much better-balanced car, aided by a new, quicker steering rack—the same as on the BRZ. The helm connects to the rest of the car better than before and puts more control in the hands of the driver. It’s as stable and comfortable at highway speeds as it is fun and responsive at the lower end of the speedometer. 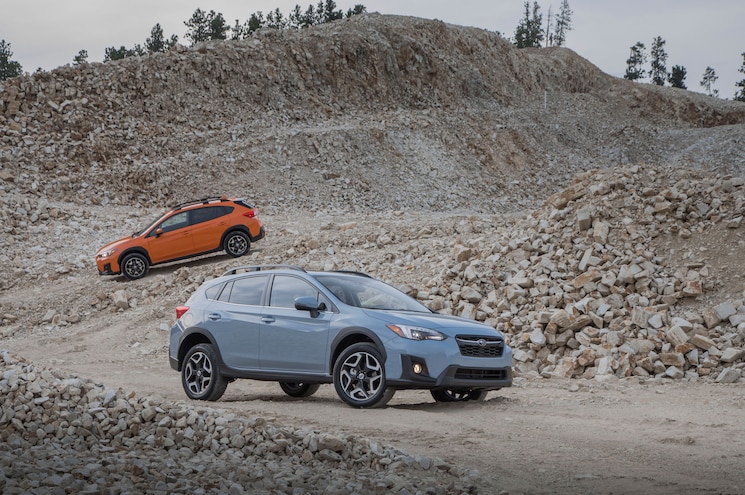 View Photo Gallery | 53 Photos
Photo 4/53   |   2018 Subaru Crosstrek Exterior Front Quarter Static 02
X-Mode, Subaru’s off-road mode that helps prevent wheel slip and includes hill descent control, is available on the Premium and Limited trim levels. No one’s taking this crossover rock-crawling and careful application of the brake and throttle serve the exact same purpose, so we’re not 100-percent sure it’s necessary. But X-Mode is there should anyone want it on steep or loose terrain. 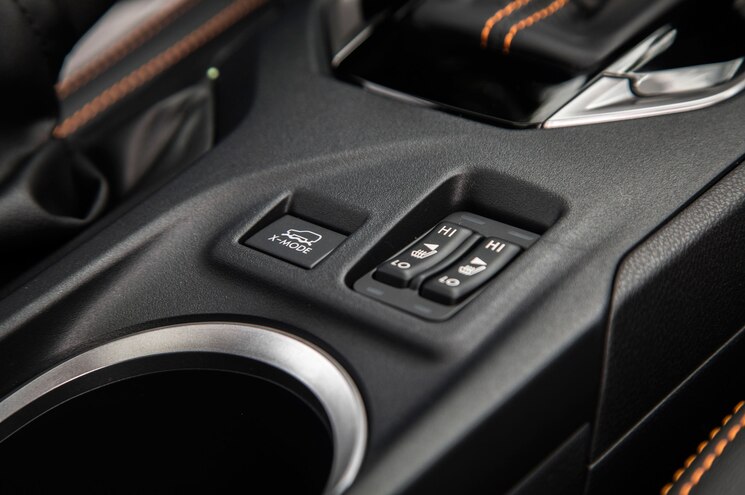 View Photo Gallery | 53 Photos
Photo 5/53   |   2018 Subaru Crosstrek Interior X Mode Button
The exterior is by no means unrecognizable. It’s the same basic shape as the first-generation crossover, only now it has broader shoulders over the wheels, a new blade character line on the side panels, and a more aggressive front fascia featuring a larger grille. As such, this new Crosstrek is a slightly sexier version of itself. Can we call a Subaru sexy? 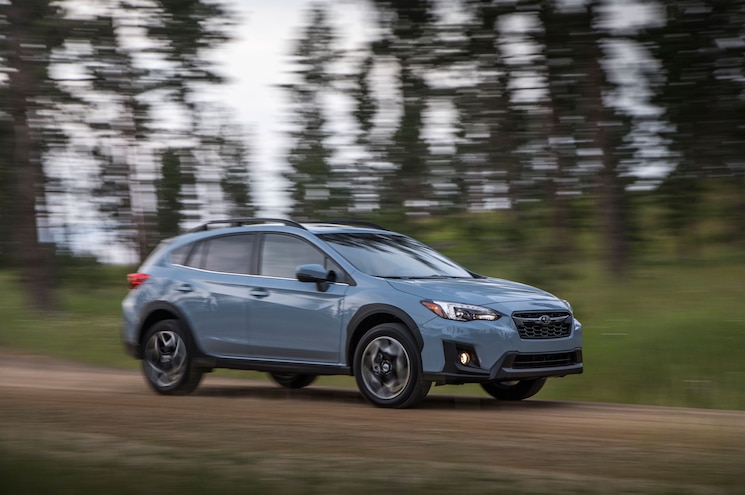 View Photo Gallery | 53 Photos
Photo 6/53   |   2018 Subaru Crosstrek Exterior Front Quarter 08
The new frame allowed for the entire body to be reimagined to its smallest details. One of the most thoughtful is the repositioning of streamlined taillights that widen the tailgate opening by four inches for additional clearance to stash your whiskey. Though the inside dimensions are virtually the same, the cabin is about an inch wider. However, with the seats down, that gets you slightly more than three cubic feet of cargo space over last year’s model. Though not quite in the same size category, Mazda’s CX-5 and Honda’s CR-V both have more hauling space. But the Crosstrek’s footwells for both front and rear passengers are about an inch bigger, hence roomier wayfaring for all your passengers. With so many other carmakers prospecting in the mini-ute segment, it’s becoming more and more like the Wild West, and every extra inch matters.
Better sound insulation makes all the outdoorsy driving quieter. The instrument panel now wraps around the cockpit, extending outward toward the door panels, and the smaller, sportier steering wheel is as racy as a saloon gal. Contrast stitching on the dash and armrests and unique upholstery accents on the seats give a leg up to the Crosstrek’s more refined mien. 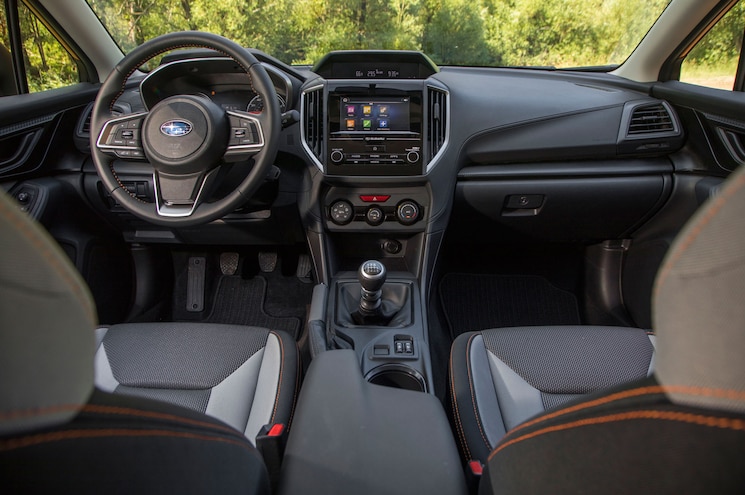 View Photo Gallery | 53 Photos
Photo 13/53   |   2018 Subaru Crosstrek Interior Dashboard 01
The Crosstrek’s got every safety airbag, alarm, bell, and whistle possible. The utilitarian center stack has two USB ports for charging every device a gold nugget can buy and showcases the same infotainment system that was introduced in the 2018 Impreza, including the bird-watching app that Subaru says is its most popular. The 2.0-liter engine boasts 80 percent new parts and makes 152 hp and 145 lb-ft of torque, which takes a bit of pedal to make it go uphill at the 4,000-foot altitude where we tested it. A turbocharger, like what’s available on the Forester 2.0XT, would do wonders to solve the Crosstrek’s power woes, turning it into a high-riding WRX in the process. At least the transmission choices (a standard six-speed manual or optional CVT) take advantage of the available power with smoothness, like silt through a gold-panning sieve. 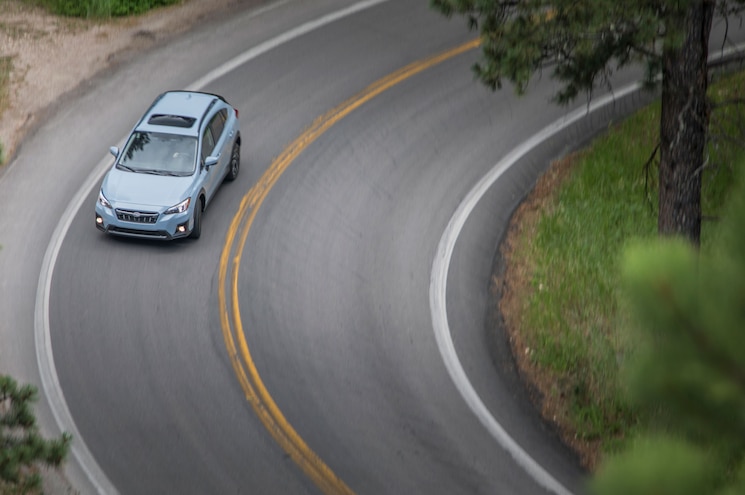 View Photo Gallery | 53 Photos
Photo 14/53   |   2018 Subaru Crosstrek Exterior Front Quarter 12
Subaru stakes their claim to a best-in-class all-wheel-drive fuel economy at 33 mpg highway, with a 547-mile cruising range so you can go farther on one tank of gas. The base price starts at $21,790—not a lot of bullion for a lot of utility and fun. That price puts the Crosstrek at the bottom of Subaru's crossover lineup, which includes the boxier, taller Forester and longer, more upscale Outback, pegging the Crosstrek as the sportier, more youthful offering. If there is gold to be had in the South Dakota Black Hills, the 2018 Subaru Crosstrek would be a darn good way to get after it. 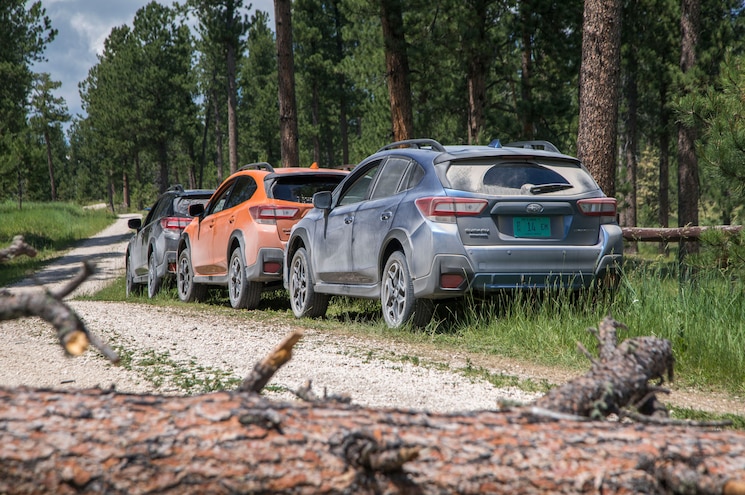