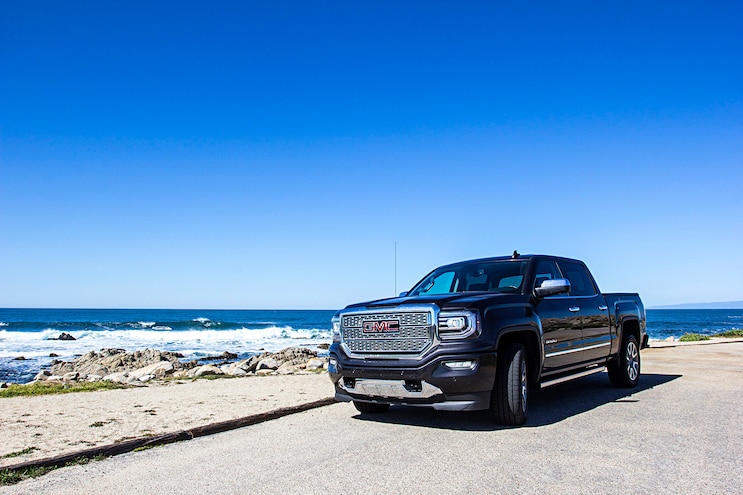 The sad day has finally arrived: Our 2016 Pickup Truck of the Year–winning GMC Sierra 1500 Denali has reached the end of its time in our care. The fourth and final quarter with the truck flew by quicker than the rest, with us amassing just shy of 3,000 miles during this time, bringing the total driven to date to 18,210. We could have easily cracked the 20,000-mile mark had the truck not been out of our possession for the amount of time that it was. 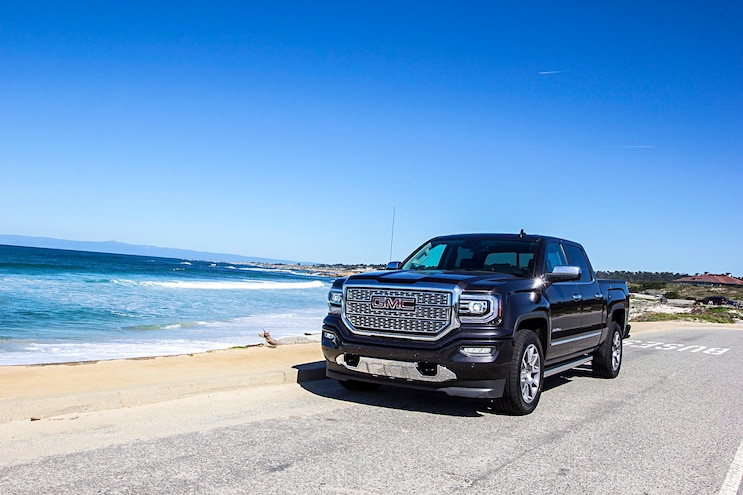 View Photo Gallery | 7 Photos
Photo 2/7   |   Our ’16 Sierra Denali was a fantastic road-trip truck. Despite having 420 hp on tap, we regularly recorded highway fuel economy of more than 20 mpg.
During this quarter, we were finally able to hook up a trailer and truly test the towing ability of GMC’s agile ½-ton. With a tow rating of 9,200 pounds, we hitched our 18-foot utility trailer and loaded it down to a gross weight of just shy of 9,000. We then proceeded to point the truck north from our SoCal headquarters and head for the peak of the infamous Tejon Pass, also known as the Grapevine. With a load near the Sierra’s limit, we expected a certain amount of, let’s call it, discomfort while towing. However, from the onset we were presently surprised with how comfortable and confident the Sierra was.

View Photo Gallery | 7 Photos
Photo 3/7   |   2016 GMC Sierra 1500 Denali Long Term Report 4
Acceleration from a dead stop came at a measured rate, even with the 6.2L V-8 churning 420 hp. Once moving, the truck quickly got the load up to speed and was able to maintain the legal speed limit and even pass slower traffic with ease. The eight-speed automatic transmission seemed to settle into its sweet spot and didn’t display any of the shifting oddities we had come to expect during normal day-to-day driving. As the grade began to increase, we only noticed a slight uptick in shift frequency as the transmission and engine worked together to maintain speed. While performance wasn’t an issue, we were able to actively watch the fuel-economy meter dip ever deeper into the single digits. This was no surprise, however, from the large-displacement V-8. 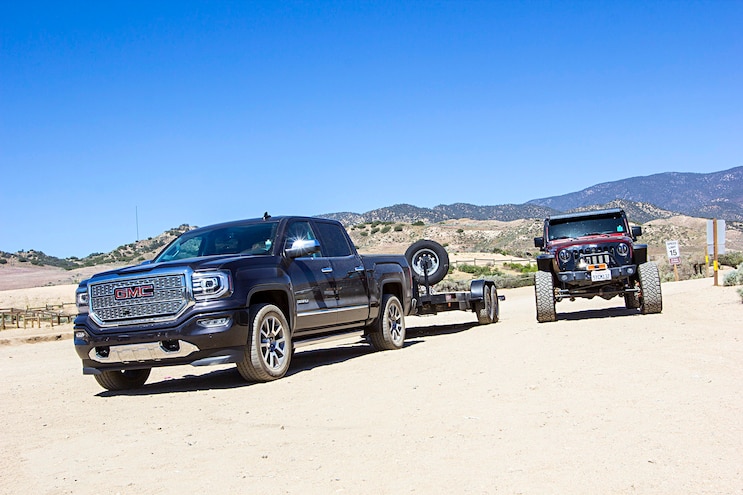 View Photo Gallery | 7 Photos
Photo 4/7   |   The combination of utility trailer and Jeep Wrangler tips the scales at 8,910 pounds, just a couple hundred shy of the truck’s rated towing ability. Thanks to a powerful engine, tight suspension, intelligent transmission with grade braking, and built-in trailer brake controller, towing at or near the max is a downright pleasant experience. 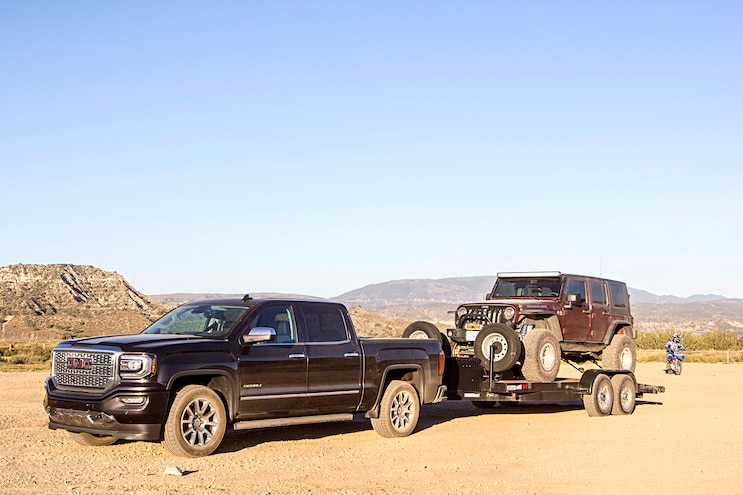 View Photo Gallery | 7 Photos
Photo 5/7   |   2016 GMC Sierra 1500 Denali Long Term Report 4 Hauling
Under load, the engine sounds amazing and reaffirms our belief that the small-block GM V-8s of late are some of the most mellifluous engines on the road. Acceleration produced a nice rumble, while at cruising rpm, everything was just as whisper-quiet as ever. The Sierra’s wide tires and low stance made for a very stable and composed highway ride, even as the winds picked up. However, when we hit dirt, these street tires immediately caused the truck to sink in the soft sand. No worries, a quick shift to four-low and we were out before the crowd of onlookers grew too large.
Overall, our year spent with the ’16 GMC Sierra 1500 Denali served its purpose and reinforced our decision to name it the 2016 Pickup Truck of the Year. Transmission issues aside (which we have determined to be an issue isolated to our truck and mostly fixed with software updates), the Sierra was a constant joy to live with. The interior was quiet and luxurious and the exterior was modern and intelligent. The truck made tons of power and returned excellent fuel economy time and time again. We could drive long distances for many hours with little sign of fatigue, and the OnStar 4GLTE easily turned the truck into a rolling office. As with all good things, this one too has come to an end and we’re grateful for the time spent with it. 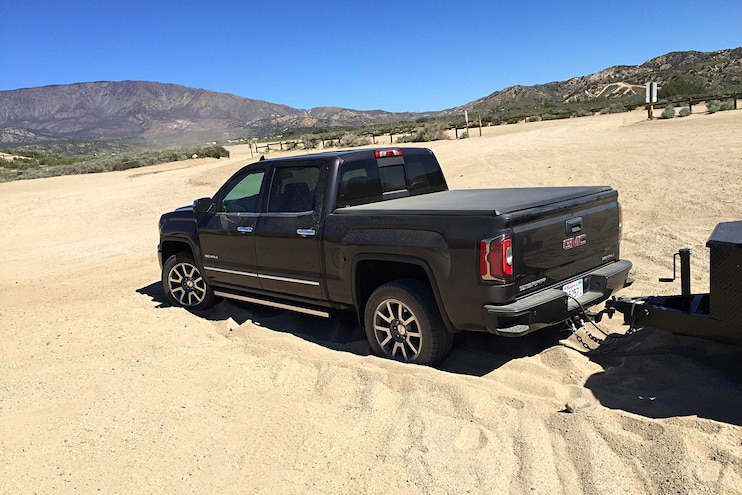 View Photo Gallery | 7 Photos
Photo 6/7   |   The Sierra’s wide street tires proved great in wet and snowy conditions, but not so much in soft sand with a load in tow. We got the truck unstuck without any outside help, so does it really even count? 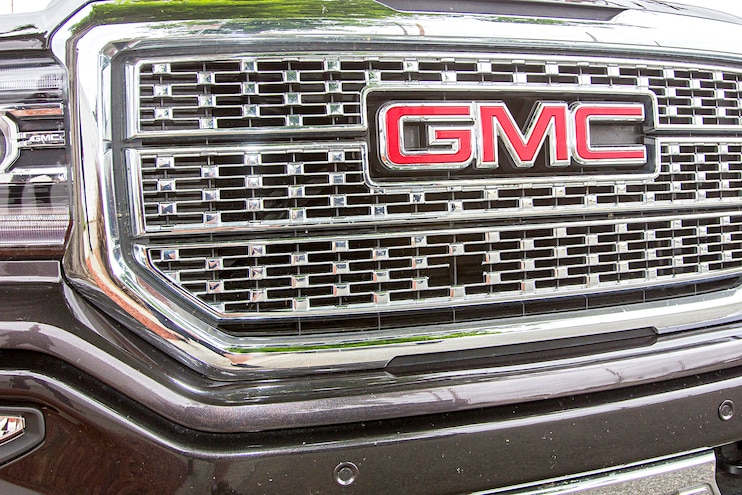