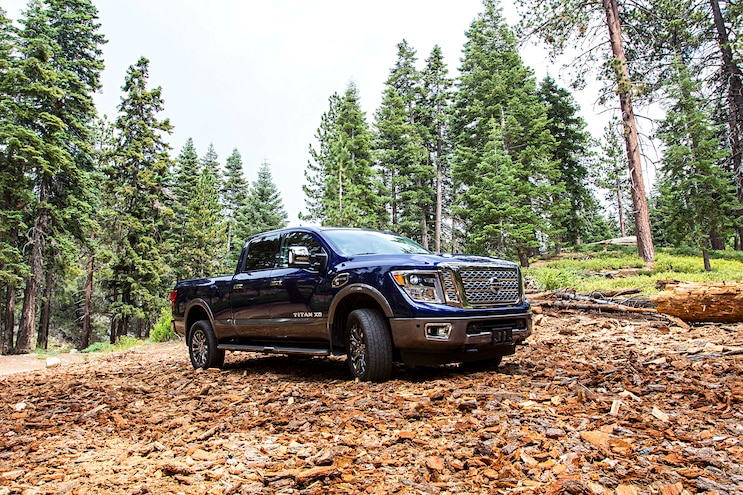 Our month of sadness also finds our long-term Nissan Titan XD headed back to the pastures from which it came. Fortunately, we somehow managed to talk Nissan into an extra month with this staff favorite and racked up an impressive 23,133 miles. This final quarter consisted mostly of highway miles, with a bit of off-road thrown in just for kicks.
Until the last day, we remained impressed with just how quiet and composed this truck remained. We experienced no squeaks or rattles with the entire structure remaining tight. This fact is punctuated by the knowledge that our XD was a very early production unit, and the ones rolling off the line now are even better. The truck’s heavy steering remained a point of contention among drivers, with some experiencing its tendency to track with the road crown worse than others. Some days it would pull very hard to the right, others it would seem to track laser straight. We never settled the internal debate of why it did this. 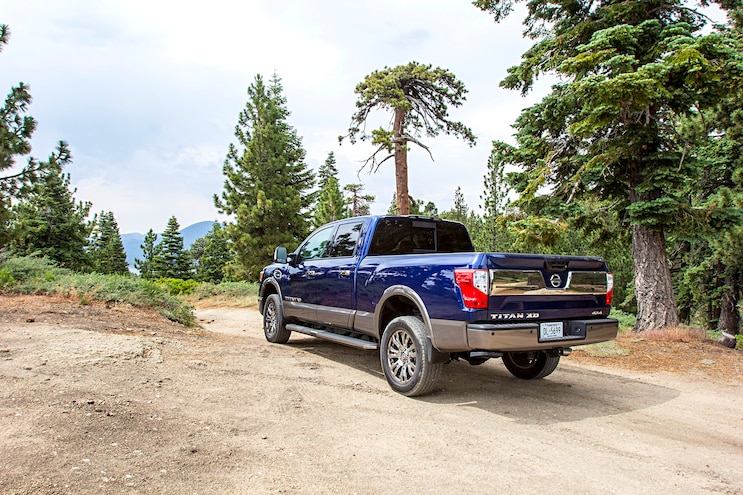 View Photo Gallery | 6 Photos
Photo 2/6   |   2016 Nissan Titan XD Report 4 Rear
The truck always returned very consistent fuel-economy numbers, and we regularly received confused looks from “traditional” heavy-duty pickup owners when we pulled up to the diesel pump. We also remained optimistic until the end that the 20+ mpg displayed on the driver information center would stay, but alas, the exhaust-regeneration cycle always seemed to have its way and kick the average economy down to the mid-teens. Speaking of regen, on more than one occasion we shut the truck off while it was occurring and smelt what can only be described as burning plastic from the passenger side of the truck. We accepted it as normal once we determined that the side steps weren’t melting. During this quarter, we decided to head off the beaten path with the truck and explore some backcountry trails in our local mountains. We were pleasantly surprised at the quality of the ride and just how comfortable and quiet the truck is, even on unmaintained roads. Don’t get us wrong, the Titan XD isn’t a race truck or a rockcrawler, but it’s quite capable for getting to a cabin or campsite. 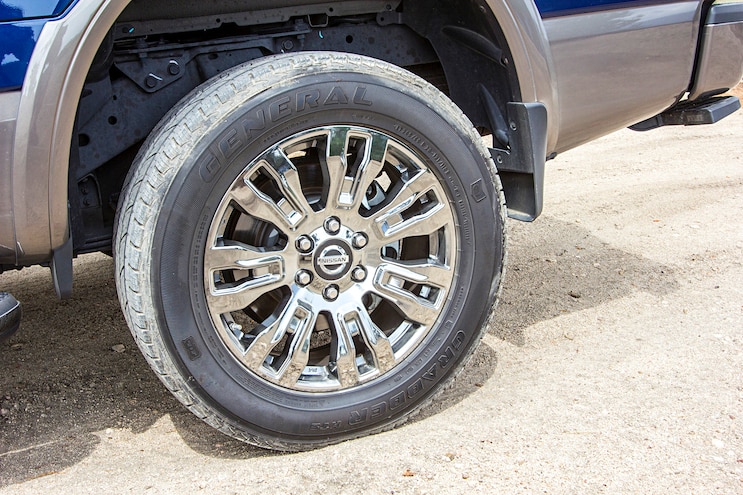 View Photo Gallery | 6 Photos
Photo 3/6   |   2016 Nissan Titan XD Report 4 Wheel
We never seemed to kick the issues with our factory stereo head unit, though the spontaneous restart only happened once during the final quarter. Everyone who drove the truck commented on the hypersensitive volume knob. We’ve since confirmed that this was an anomaly with this truck and not indicative of the species as a whole. While it would be nice to have a larger screen, Nissan’s navigation system is still one of our favorites for its ease of use.
Over the course of a year, the Titan XD won more fans that not, constantly got looks everywhere we went, and people stopped to talk about the truck until the day it left. We’re seeing more and more on the road each day, and it’s obvious that the curiosity surrounding the Titan XD hasn’t waned one bit. Complaints were few, far between, and quite trivial in nature. All said, the Titan XD proved to be an extremely comfortable, competent, and capable entry into the fullsize truck segment. We’re confident that if someone in the market for a pickup drives this truck, they’ll buy it. It’s just that good. 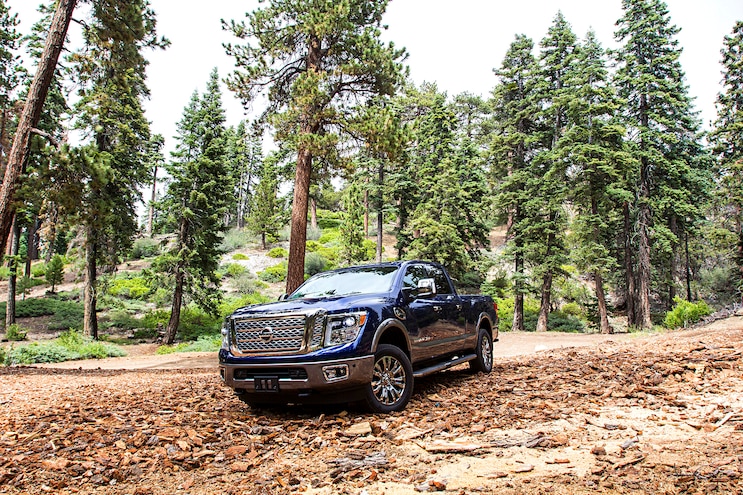 Report 4 of 4
Previous report(s): March/April 2017, July/August 2017, September/October 2017
Base price: $60,520
Price as tested: $62,665
Miles to date: 23,133
Miles since last report: 5,423
Average mpg (this report): 15.05
Test best tank (mpg): 20.24
Test worst tank (mpg): 12.02 (towing)
Test maintenance: Added DEF, 10K mile service, 20K mile service, added DEF (again).
Test problem areas: Head unit hard restart
Logbook Quotes:
“Fuel economy is REALLY consistent. You can easily bet on a 15-mpg average over the course of 1,000 miles.”
“The truck is quite composed off-road, with no weird squeaks or rattles. The suspension is really good as well on unmaintained roads.”
“Just filled it with exhaust fluid—again. Nissan needs to get consumption under control or add a lager tank.”
“After 20,000 miles, one Titan Box is still dry and the other leaks—odd.”
“Just had a woman in a base-model BMW fly off on an expletive-filled tirade because we were driving a pickup too slowly for her liking. Apparently, we’re a “f***ing redneck, white-trash, sh**t-eating f***face. Guess this validates that the Titan XD is a ‘real’ truck after all.”