The Redesigned Crossover Gets Hit with the “Professional Grade” Stick 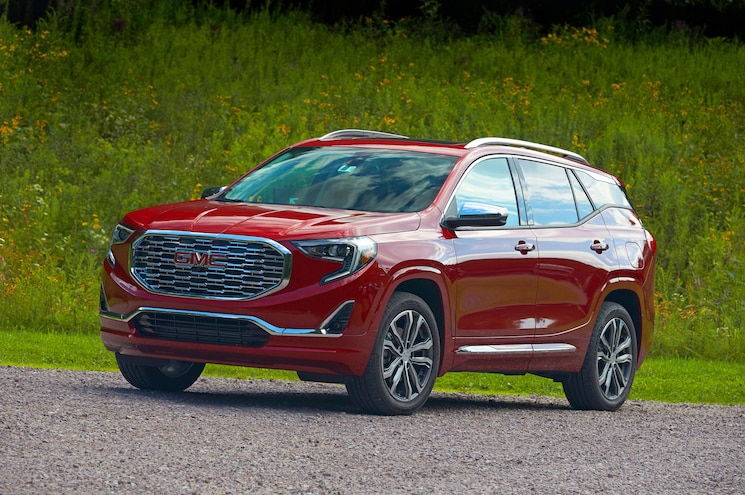 Introduced for the 2010 model year, the GMC Terrain was the company’s first entry into the profitable small-crossover market. The “professional grade” nameplate sought to bring an upmarket take to the segment, populated by the likes of the Honda CR-V and Toyota RAV4. That first Terrain, based on the Chevrolet Equinox, had plenty of interior space and its optional 3.6L V-6 was gutsy, but with homely styling and a dynamics-sapping curb weight, it was doomed to mediocrity. 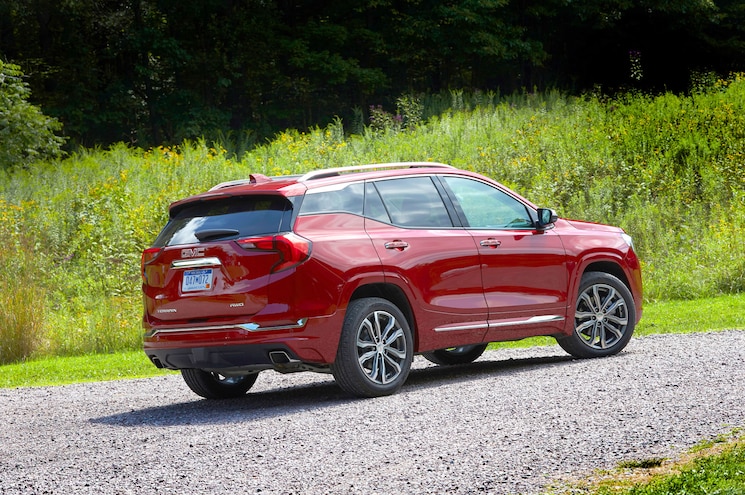 View Photo Gallery | 39 Photos
Photo 2/39   |   2018 Gmc Terrain Denali Exterior Rear Quarter 02
That middle-of-the-road narrative might change with the Terrain’s fresh redesign for 2018. Immediately obvious is the total styling update, replacing the old Terrain’s LEGO-shaped form with a sleeker body. HID headlamps incorporate LED running lights on every 2018 Terrain (even the base-model SL), while the Denali gets modern LED headlamps that cut a sophisticated new face. The side profile is dominated by a pinched rear beltline, giving the Terrain the floating-roof style that’s very in right now. And each model gets tasteful chrome appliques that impart an upmarket visage missing in many other compact SUVs. 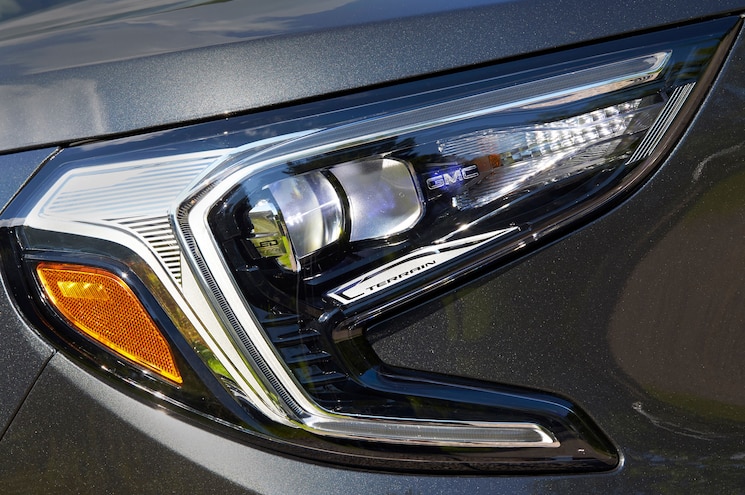 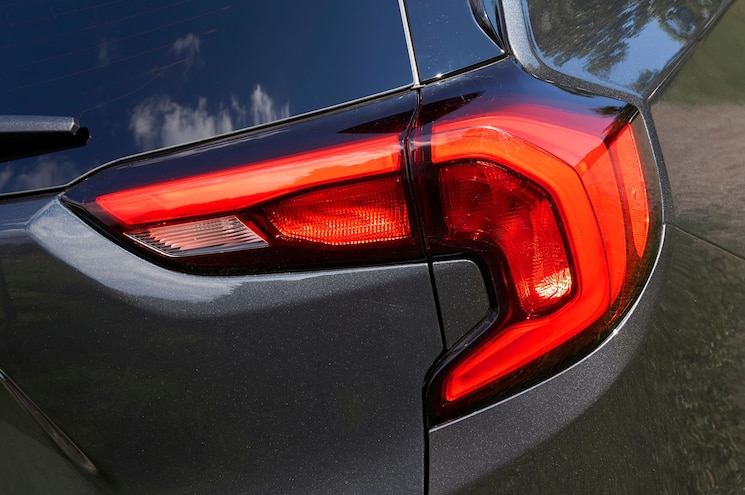 View Photo Gallery | 39 Photos
Photo 4/39   |   2018 Gmc Terrain Denali Exterior Rear Taillight
Further differentiating the Terrain from every other compact crossover on the market today (save its likewise-new Chevrolet Equinox sibling) is an all-turbo powertrain, starting with the base 1.5L I-4. Producing 170 hp and 201 lb-ft, it moves the Terrain down the road with little hesitation; even packed with four adults and their luggage, the 1.5 had enough power to dispatch hills and merge maneuvers with minimal drama. Aided by a segment-exclusive nine-speed automatic, GMC claims it’ll hit up to 26 city/30 highway mpg, and we believe those numbers. 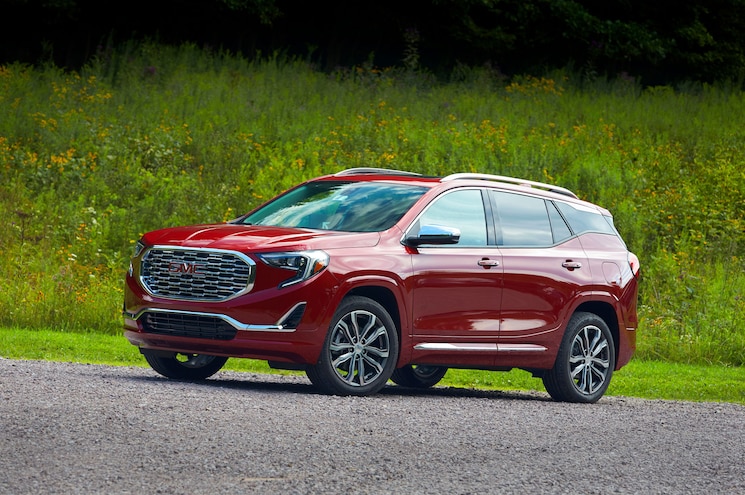 View Photo Gallery | 39 Photos
Photo 5/39   |   2018 Gmc Terrain Denali Exterior Front Quarter 02
Power-hungry shoppers should jump straight to the 2.0L turbocharged I-4 available in the SLE and SLT and standard in the Denali. With 252 hp and 260 lb-ft of torque, its output lags behind the 3.6L V-6 that was optional in the previous Terrain, but you’d never know it from behind the wheel, thanks in part to that nine-speed auto. With fleet off-the-line reflexes, minimal turbo lag, and excellent passing power, the 2.0 is a surprising engine to find in the competent—but rarely fun—compact SUV segment. Equipped with the towing package, the 2.0L turbo can lug around a 3,500-pound trailer. 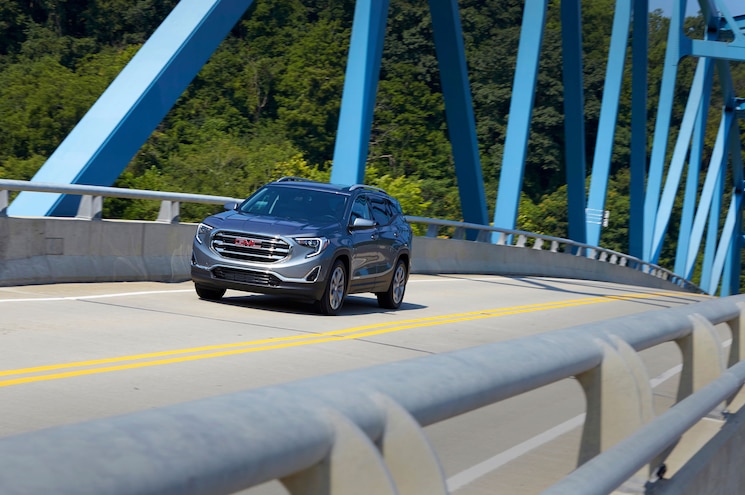 View Photo Gallery | 39 Photos
Photo 6/39   |   2018 Gmc Terrain Slt Exterior Front Quarter In Motion 01
Setting the Terrain apart is its optional turbodiesel engine, a 1.6L unit that provides 137 hp and 240 lb-ft of torque. That horsepower number is concerning, as it lags behind every other compact crossover on the market (the 1997 Honda CR-V made almost as much, for heaven’s sake). But with a torque curve that’s as wide and flat as a Nimitz-class aircraft carrier, the EcoTec-branded diesel gets off the line impressively and maintains freeway speeds with ease. Its calling card is an EPA highway rating of 39 mpg, tops in its class. It’s only available in the SLE and SLT, with front- or all-wheel drive. Until Mazda answers the call with its own compact diesel crossover, the Terrain and its Equinox sibling are the only oil-burning options on the market currently.
If it were our cash, we’d pick either the powerful 2.0L turbo or the economical diesel, although we must cop to the oil-burner’s slight vibrations at idle and its grumbly noise under acceleration. Diesel devotees won’t care and others might not notice, but there’s definitely a slight clatter that proves the 1.6 is a product of its type.
Sharing a platform with the all-new Chevrolet Equinox, the 2018 Terrain is downsized and light-weighted compared to its predecessor, with overall length reduced by 3 inches, wheelbase by 5.2 inches, and width by 0.4 inches. Curb weights are down by about 400 pounds across the lineup too, improving vehicle dynamics in just about every metric. 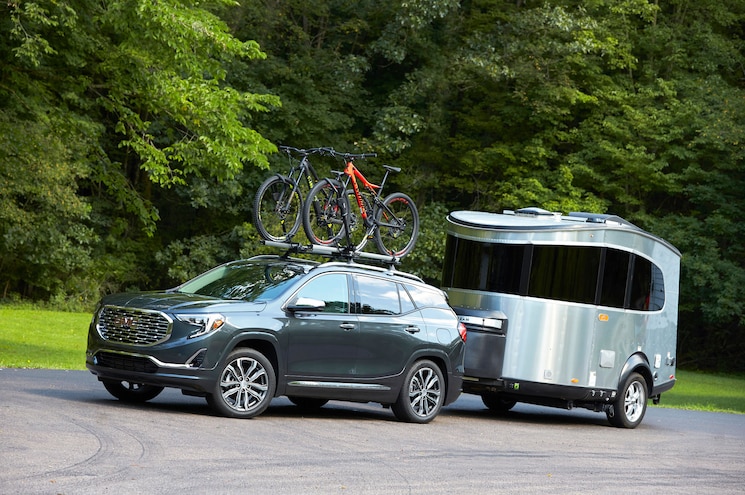 View Photo Gallery | 39 Photos
Photo 10/39   |   2018 Gmc Terrain Denali Exterior Front Quarter With Trailer
The reduced footprint also leads to reduced interior space, at least in pure numbers. However, we fit in the Terrain quite comfortably, with enough space for four six-footers. The optional panoramic “Skyscape” sunroof ate into rear-passenger headroom somewhat, although most adults and kids will fit just fine. Our biggest complaint about the Terrain’s interior (and almost every other GM interior) is a lack of thigh support from the front and rear seats; expect a case of tired-bum about three hours into your drive.
The 2018 Terrain loses its predecessor’s sliding rear seat, which allowed owners to prioritize rear-seat or cargo space. But even without it, there’s nearly 30 cubic feet of wide, usable room out back with the seats up. The 60/40 rear seat can also fold to open up 63.3 cubes of room, and a flat-folding front seat (new for 2018) expands total cargo-carrying capacity to 81 cubic feet, with linear space for an eight-foot kayak. In an apples-to-apples comparison, however, the Terrain’s competition holds more stuff behind the seats. 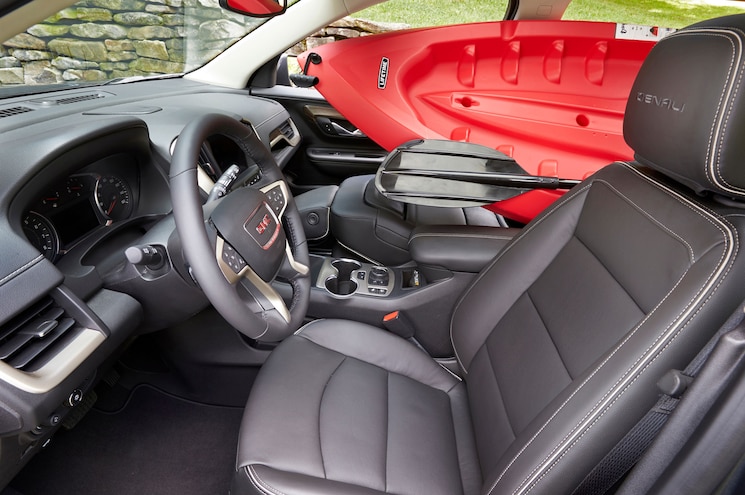 View Photo Gallery | 39 Photos
Photo 11/39   |   2018 Gmc Terrain Interior Cargo Front Seat Down
Once loaded down with passengers and cargo, driving the Terrain is a simple task. Its “Electronic Precision Shift” gear selector requires a short learning curve, with Park, Neutral, and Low actuated by pushbuttons, and Reverse and Drive controlled by simple fingertip triggers. While we might prefer a traditional gear lever, the Terrain’s solution opens up space in the center console for large cupholders and a respectably sized cubby. 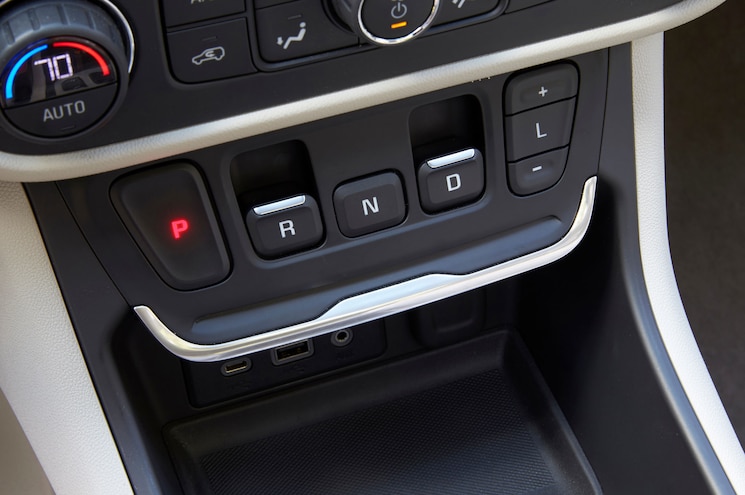 View Photo Gallery | 39 Photos
Photo 15/39   |   2018 Gmc Terrain Denali Interior Electronic Shift Selector
On the road, the Terrain is quiet and smooth, matching its segment for comfort and refinement. Body motions over broken pavement are well damped, and the steering is heavy off-center to provide good directional stability. We don’t have much to complain about regarding the driving experience, as it matches its competition blow for blow in subjective dynamics.
Starting at $24,995 for the SL FWD and moving up to $39,270 for a Denali AWD, the Terrain is targeting the premium end of the family-crossover market. Its trump cards include the impressively economical diesel powerplant and the stonking 2.0L turbo engine, with the base 1.5L turbo offering adequate performance as well. That fold-flat front seat is a nice feature, one rarely found in the compact-CUV segment. And to our eyes, it looks the most grown-up in its segment, with a sophisticated, cohesive design inside and out. Much improved over its predecessor, the 2018 GMC Terrain feels like a welcome member of the “Professional Grade” family. 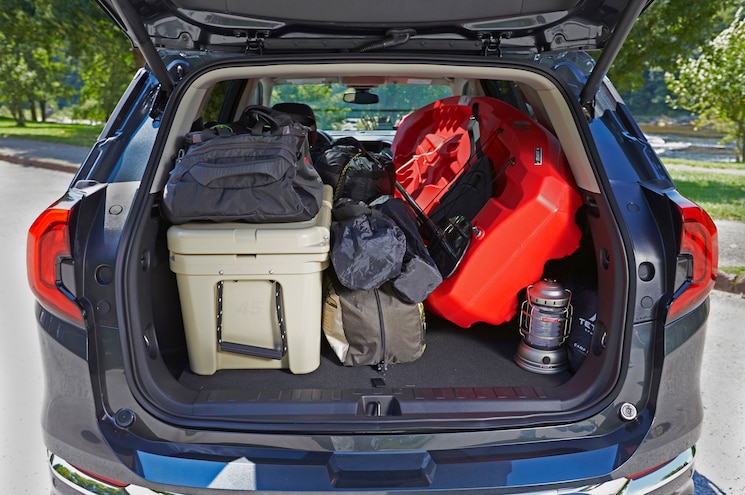