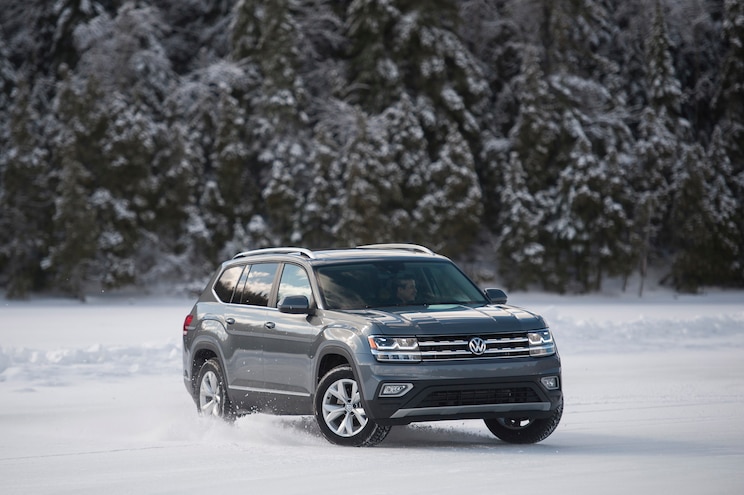 Volkswagen might be a bit late to the three-row crossover party—OK, a lot late. But if our first brief spin in the ’18 Atlas SUV is any indication, it has arrived fully baked and competitive. The company’s new crossover is the largest Volkswagen ever built in the States and the largest vehicle on the MQB platform, which underpins everything from the compact Golf to the European-market Passat—and even the Audi TT sports car. If there was any question about the platform’s flexibility, the difference in wheelbase between those cars and the Atlas (a delta of more than 18 inches) answers it.
It’s easy to see why VW references Explorer often: The two are essentially the same size outside, but the Atlas feels quite a bit roomier inside. Even if SAE measurements don’t reflect it, the Atlas has an airy, spacious feel that mirrors VW hatches and sedans rather than the ensconced feel of many crossovers, and cabin appointments are VW-familial, only scaled up to size L. There’s a lot of room in the sliding middle row and adult-usable third row, with walk-through space that rivals minivans to get back there. 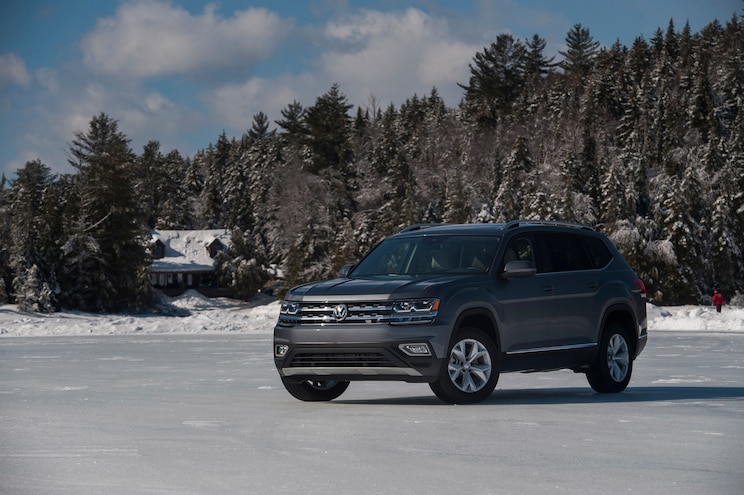 View Photo Gallery | 20 Photos
Photo 2/20   |   First Drive 2018 Volkswagen Atlas
You’ll get a 235hp, turbocharged 2.0L I-4 in front-wheel drive or a 276hp V-6 with front or optional all-wheel drive, all using an eight-speed automatic. The 4Motion system echoes that found in Golf R and Alltrack, adding rear drive only when front slip is detected, up to a 50/50 torque split. 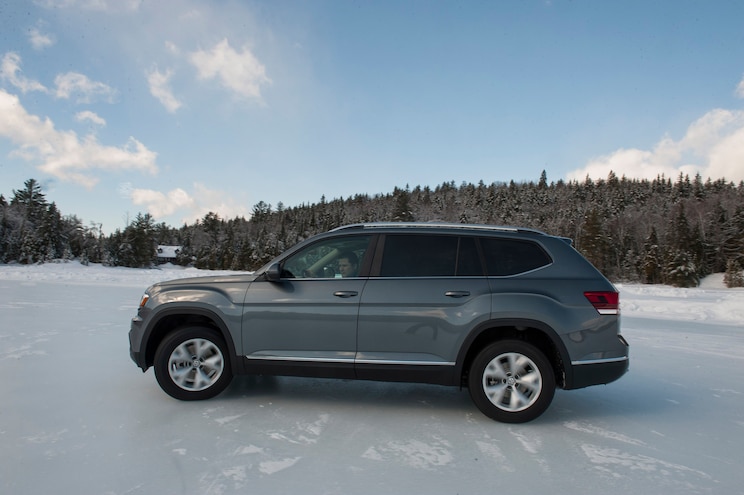 View Photo Gallery | 20 Photos
Photo 3/20   |   First Drive 2018 Volkswagen Atlas Side View
The console mode dial selects on-road, snow, and off-road modes, with snow-muting responses for improved traction and off-road enabling hill start assist (HSA), hill descent control (HDC), center diff locking, and more wheel slip for loose surfaces. There’s also a custom off-road setting, giving more options in HSA, HDC, diff lock, and powertrain programming from the on-road mode. Those on-road options, switched by the mode button within the dial, are eco, normal, sport and individual, lest you prefer the standard steering effort but want crisper throttle and transmission response.
Our exposure came on frozen roads—paved and not—with some gradients and curves added for good measure, along with warm-weather backcountry highways in south Texas. You could invoke stability control if you pushed almost irresponsibly hard, but otherwise the Atlas went where pointed on ice, snow, slush, or wet pavement. On dry roads the ride is composed and comfortable. While it’s not the sportiest SUV on the market, it’s not the most lumbering either. The Atlas is moderately more fun to run in off-road or sport modes, but it’s set up for safe, predictable transport rather than drifting. Running full time in sport mode will tank the vehicle’s fuel economy, but it really ups the enjoyment. Your mileage may vary.
Steering is quite light at parking-lot maneuvering speeds and weights up nicely with speed or vigor, but sport mode feels artificially heavy without adding much feedback. Brake-pedal feel allowed gentle application or good bite with ease. 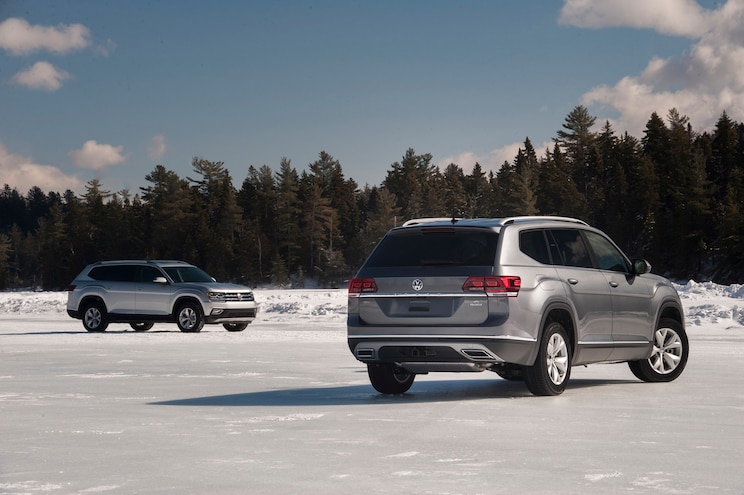 View Photo Gallery | 20 Photos
Photo 4/20   |   First Drive 2018 Volkswagen Atlas Rear
Ride quality, at least with just two or three adults on board, was good on frozen, rural tracks serving up the good variety of bumps, ruts, holes, and general roughness some Midwest cities call roads. While the suspension travel and electronic-traction aids suggest it will deliver credible off-highway crossover performance, you still won’t want to follow a Trailhawk or Discovery. The Atlas is more designed for a weekend ski trip or hauling the kids to Scout camp rather than hardcore off-roading. Body motion and roll are controlled, not absent, and it feels more like a large Alltrack than the heftier—and heftier feeling—Touareg. VW apparently bent more toward maintaining dynamics and driver involvement than completely rubberizing and isolating any upsetting input. Passengers enjoy a well-appointed cabin in all trims, with the SEL Premium with 4Motion being the top dog. Driving the SE model, we noticed an abundance of road noise, which could be attributed to a combination of tire choice, trim level sound-deadening, and the type of road surface we were on. Either way, it was a bit frustrating. Stepping up to the SEL Premium is also the only way to get leather seats, LED taillights, and the Fender audio system. 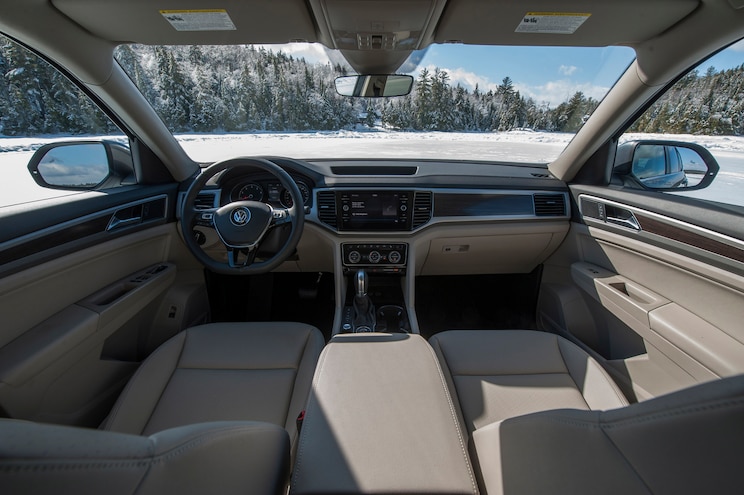 View Photo Gallery | 20 Photos
Photo 5/20   |   First Drive 2018 Volkswagen Atlas Interior
Overall, we were quite pleased with the Atlas. It performed admirably in all conditions, and it fits right in with its brethren in the midsize three-row SUV class. Current Volkswagen owners will appreciate the familiarity, and those not already in the family will surely find Atlas to be a fine option. It’s said that good things are worth the wait, and Atlas proves just that.