The First Quarter With our PTOTY Winner 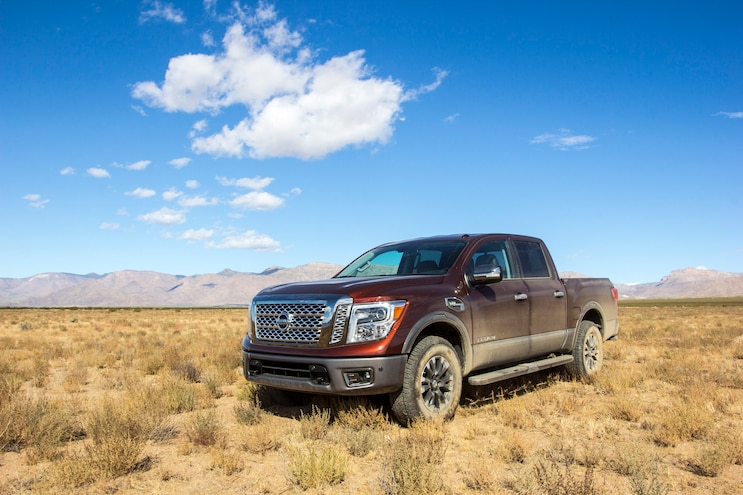 Nissan made a big splash in ’16 with the introduction of the all-new Titan XD, and the company followed up the nearly HD-sized XD with the smaller ½-ton Titan in ’17 to much fanfare. For our part, we awarded the Titan with our coveted 2017 Pickup Truck of the Year award. Since giving the award, we’ve been living with a clone of the unit that participated in our test, and the biggest takeaway thus far has been an overwhelming confirmation that our accolade was not given in jest.
Our long-term test unit is a four-wheel-drive crew cab dressed in Platinum Reserve trim. We also opted for the Platinum Reserve Utility Package, which added an electronic locking tailgate, Titan Boxes, and a bumper-mounted bed step. In addition, we ticked the box for the Off-Road Package, which dropped wheel size from 20 inches to 18 and added all-terrain tires and Bilstein shock absorbers. All-in, our Titan rang up to a respectable $57,995. By our calculations, that’s approximately $4,000 less than most of Titan’s similarly equipped competition. 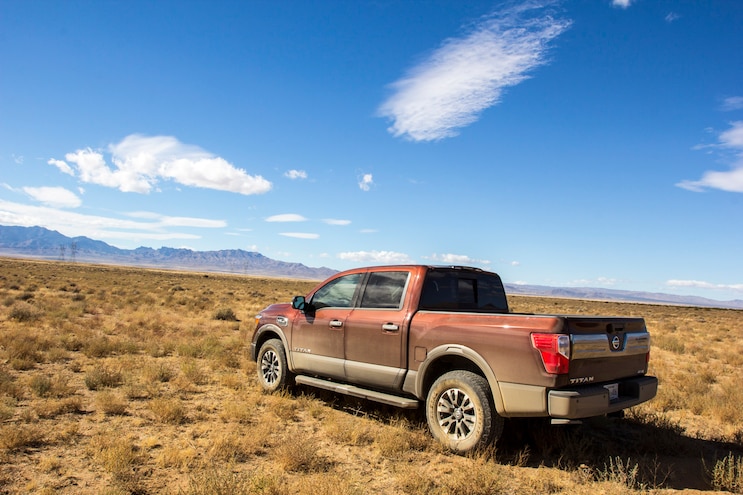 View Photo Gallery | 8 Photos
Photo 2/8   |   2017 Nissan Titan Report 1 Rear
We tried to spend our first quarter with the truck doing all the things a typical Titan owner would do with this pickup. This included a fair amount of off-road driving, towing a trailer at its maximum rated weight, and a good combination of both city and highway driving. In every situation, the Titan continues to impress us.
It’s not all sunshine and roses, however, as our biggest complaint to date centers around fuel economy. So far, we’ve been missing the mark on rated fuel economy by a fairly wide margin. We try to drive in a respectable manner, don’t speed excessively, and have a pretty diverse routine that includes equal amounts of highway and city travel. Combining this with a relatively small fuel tank, 26 gallons, and a conservative gauge that triggers a low-fuel warning after consuming just 22 gallons, we find ourselves filling up about every 250 miles. We’re hopeful that as the truck continues to break in that we’ll be able to get closer to the EPA rated 15 mpg city, 21 highway, and 18 combined.
Back in the land of compliments, we absolutely love the way the Titan’s tow mode functions. Our test trailer, fully loaded, weighs just short of 9,000 pounds, and we took it on a 300-mile trip that included a mountain pass with a 6-percent grade. The truck never felt underpowered and maintained speed uphill. With tow mode engaged, the transmission acted in a way that held lower gears longer, downshifted quicker and more aggressively, and downshifted happily while braking to hold speed while on a downgrade. Fuel economy dipped into the single digits, but we expected that given its unloaded thirst. 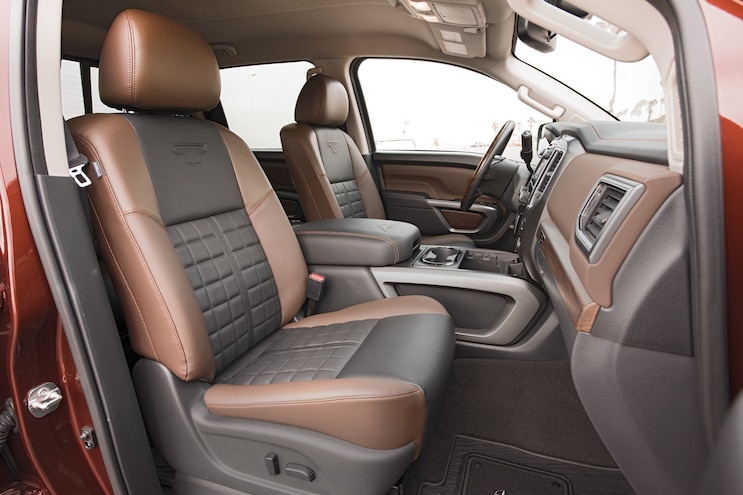 View Photo Gallery | 8 Photos
Photo 3/8   |   2017 Nissan Titan Report 1 Interior
When we ditched the trailer and hit the trails, the truck was equally impressive. Chassis and suspension tuning are remarkable, resulting in a ride down rough washboard roads and deep two-track that is very comfortable for the occupants. The Titan remains squeak-and rattle-free, and it’s just as quiet as cruising down the highway. Ride quality from the Bilstein shocks and the extra tire sidewall made possible by the 18-inch wheels combine nicely with the Zero Gravity seats to provide a ride that’s extra smooth. Let’s be real, it’s still a pickup that’s built primarily for the pavement, and as such you’re not going to be bombing through the desert tackling huge whoops and launching over sweet jumps. Instead, you’ll be comfortable when heading out to your favorite hunting or riding spot.
We’re still thoroughly impressed with Nissan’s new Titan. The company seems to have learned well from the past, focused on the future, and built a pickup that is a true jack-of-all-trades. We are excited to keep putting our tester through the paces and will continually be looking for a chink in its armor.

Previous Report(s): NA
Base Price: $55,850
Price as Tested: $57,995
Long-Term Numbers
Miles to date: 4,676
Miles since last report: NA
Average mpg (this report): 12.84
Test best tank (mpg): 17.26 (all highway w/ cruise control)
Test worst tank (mpg): 8.40 (towing 9,000 pounds)
Test Maintenance
None
Test Problem Areas
None
Logbook Quotes
“Man, that exhaust burble sounds great, even when using the remote start.”
“The truck seems reluctant to downshift, but when it does you better hold on tight!”
“One USB port? What is this, 1998?”
“Absolutely love the headlights! But what’s with the useless halogen high beams?”
“Just had the third person stop to ask me about the truck. He wanted to know how I liked the Cummins engine. He looked confused when I tried to explain the difference between the Titan XD and Titan.”