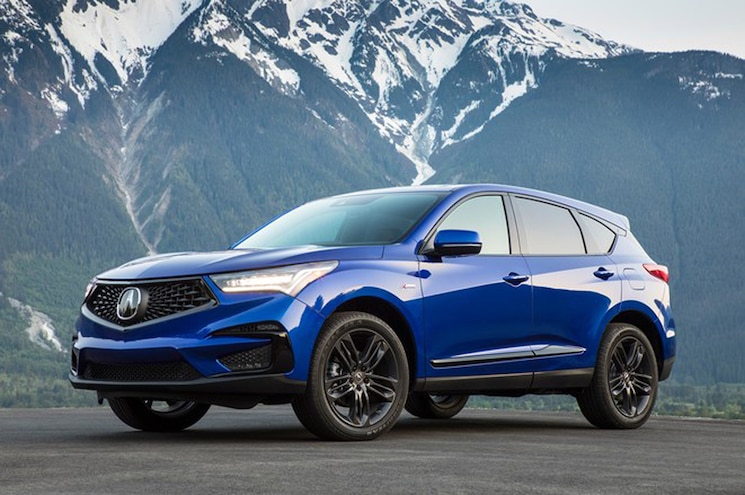 Interviewing current Acura RDX owners, the company’s product planners discovered they purchased the small luxury SUV on basis of its value, perceived safety, and reputation for reliability at a level beyond any of its competitors. Much, much lower on those owners’ list of priorities were style, snob appeal, and driving dynamics. That’s a good thing, as the outgoing 2018 RDX is saddled with bland styling, a competent-but-sedate powertrain, and all the handling sizzle of the plebian Honda CR-V with which it shares its platform.
So when Acura set out to redesign the RDX—a bestseller in its segment—for 2019, the goal was to keep the SUV’s core virtues intact while expanding its appeal for those who make their luxury vehicle purchases based more on emotion than logic. A clean-sheet redesign was in order, starting with an all-new, Acura-specific platform that shares almost nothing with the company’s Honda corporate overlords. This platform is substantially stiffer and a bit lighter than the one it replaces, thanks in part to extensive use of high-strength steel and plenty of structural adhesive. And as any vehicle engineer will tell you, a stiff frame is an excellent starting point for ride, handling, and noise control greatness. 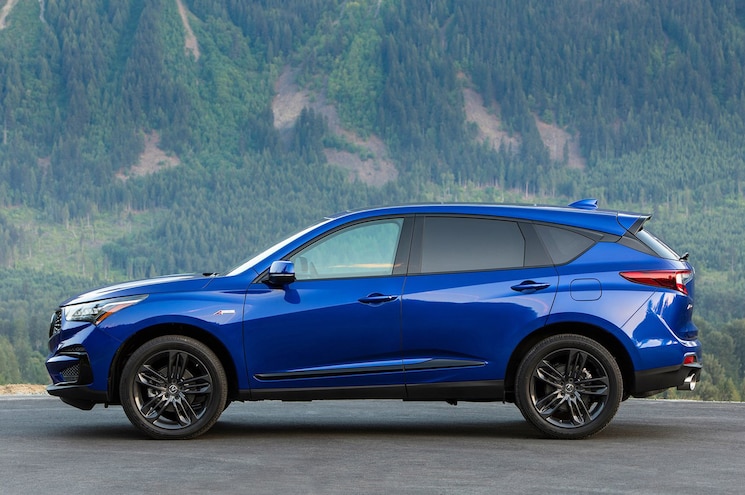 View Photo Gallery | 13 Photos
Photo 2/13   |   2019 Acura Rdx Side
Wrapped around that frame is a slinky new body that’s dripping with current Acura themes. Up front, a bold “Diamond Pentagon” grille (in gloss black on A-Spec and chrome on all others) sits between seven-element LED headlamps, casting a mean glower into a left-lane dawdler’s rearview mirror. Knife-slash creases running over the front and rear fenders and through the bodysides punch up the visual appeal as well, and Acura’s new taillight signature ensures the rear of the car will be as memorable as the front. The kinky D-pillar looks like it’s channeling the Mazda CX-5 a bit, but Acura says the design was necessary to hide a new Y-shaped structure at the rear that maximizes body stiffness without encroaching on cargo space. Sounds fine to us.
As the very first vehicle to be designed from the outset with styling inspired by the company’s Precision concept car, the 2019 RDX looks much more holistic than the MDX or Acura’s sedans. The other vehicles in the company’s lineup started out with a version of the company’s old beak nose before swapping in “Precision Crafted Performance” styling, and although they look just fine, they’re not nearly as alluring as the origami fighter jet RDX. That bodes well for future Acura models, which will follow the small SUV’s lead. 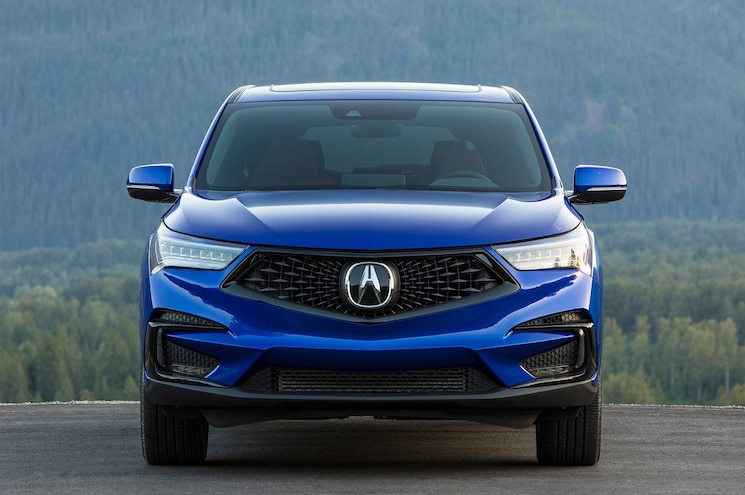 View Photo Gallery | 13 Photos
Photo 3/13   |   2019 Acura Rdx Front View
A slick new body is just the beginning on the 2019 RDX’s quest for zest. Gone is the outgoing SUV’s 3.5L V-6, which was buttery-smooth but lacking in character. Now, the RDX gets its motivation from a 2.0L turbocharged I-4 that produces 272 hp and 280 lb-ft. That’s a bit less power but a lot more torque than the outgoing mill, and with a segment-first 10-speed automatic transmission, we doubt anyone will miss the old powertrain. The 2019 RDX returns with available Super Handling All-Wheel Drive (SH-AWD), Acura’s torque-vectoring system that was available on the first-gen RDX before being axed for a less fun, cheaper, more conventional all-wheel drive in the second-gen. All of this promises good things for handling dynamics.
To test that out, Acura invited us to Whistler, British Columbia, where we could drive the new RDX on a variety of roads to test its mettle. Initial impressions were good, with the RDX’s three-mode drive system giving you as much or as little aggression as desired—former RDX owners, leave it in Comfort, as Sport and Sport+ get a bit too zesty for most everyday driving situations. However, once the road opens up and gets twisty, twiddling the massive knob above the shifter moves the needle to Sport, which adds weight to the electric power steering, moves shift points higher in the rev range, and remaps the throttle for zippier response. Sport+ goes a step further, turning the 2019 RDX into a redline-slamming hoon, for better and worse. Furthermore, on the top-line RDX Advance, each mode changes the damping of the trim level–specific adaptive suspension, offering a palpable change in the ride/handling balance.
Running the 2019 RDX through its gears, there’s always plenty of torque to get moving, with impressive throttle response even in Comfort mode. Honda’s new 10-speed auto does a very good job at avoiding harsh downshifts, which is a problem we often see in gearboxes with more than seven or eight gears, so job well done there, too. And hustling through corners at a brisk pace reveals a level of character that rivals even the German and Swedish rivals Acura brought along for comparison, much less the vanilla driving experience of the previous RDX. Acura only brought out models equipped with SH-AWD to play with, which made for a fun day of feeling the rear differential shuffle power to the outside wheel for improved stability. Brakes are reasonably responsive too, although one tester compared pedal feel to that of a hockey puck, making them difficult to modulate. 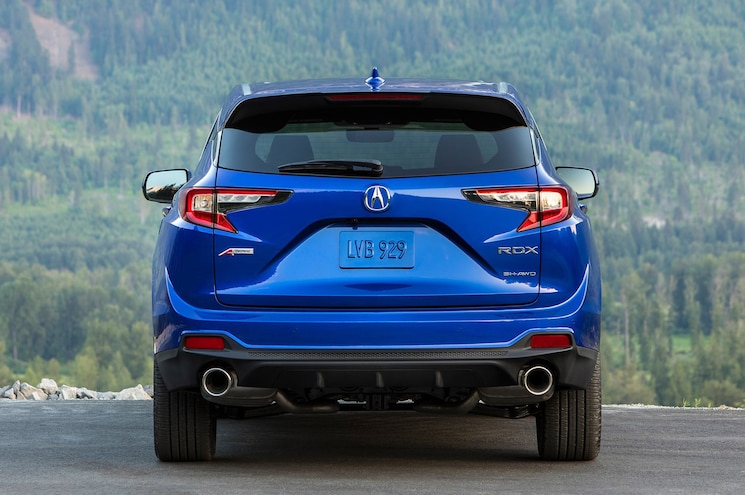 View Photo Gallery | 13 Photos
Photo 4/13   |   2019 Acura Rdx Rear
Another dynamic complaint rears its head on high-frequency road imperfections. Over the divots and pockmarks of Whistler’s post-winter roadways, there’s a surprising amount of vibration that gets transferred to the passenger cabin. The problem goes away at higher speeds, and it’s not present at all on larger bumps and potholes. But still, the suspension tuning needs a bit of work to go toe to toe with the poshly comfortable Volvo XC60 or the athletic Audi Q5.
Other than that minor complaint, the RDX does just fine as a luxury car as well. Inspired by Acura’s Precision Cockpit concept, the interior’s new design is modern and fresh, with a high-deck center console that hides plenty of storage underneath and a large center cubby and cupholders hidden by rolling wood slats. The pushbutton shifter is among the most intuitive in the segment, and Acura did well to include hard buttons for volume and climate controls, allowing for easy operation of those frequently used features.
Materials quality is a step up as well, with genuine wood and metallic accents all over the interior and improved plastics on the dash, door panels, and center console. And in spite of the new, standard panoramic moonroof, headroom for both rows is improved, as is second-row legroom. Indeed, all four outboard seating positions offer plenty of long-haul comfort, but as with anything in this size class, leave the middle seat for emergencies or short trips only. Overall, the 2019 RDX left us impressed with its interior quality and luxury. 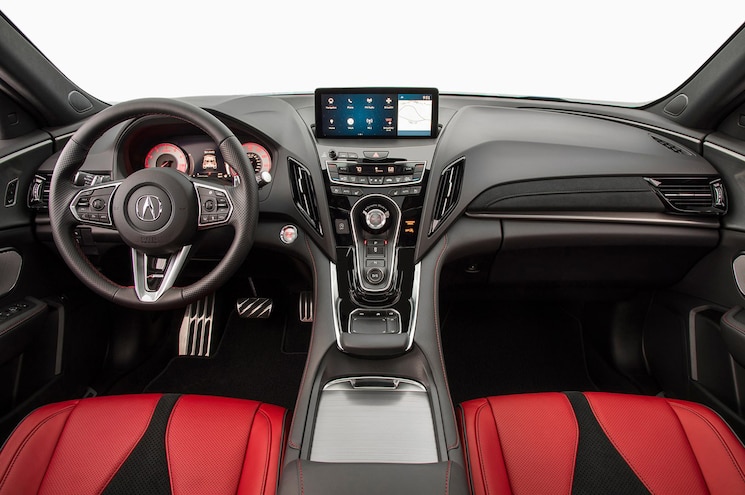 View Photo Gallery | 13 Photos
Photo 5/13   |   2019 Acura Rdx Interior
The interior also offers yet another take on infotainment integration. Acura’s new True Touchpad Interface (TTI) tries to offer the best of a touchscreen and trackpad, all in one. The static widescreen display, which is located out of reach and up high on the dashboard where the driver can see it most easily, is controlled by a touchpad right behind the shifter. The touchpad corresponds to the display perfectly, such that a tap of the upper right will activate the same location on the screen. And since it’s not a mouse-like trackpad, there’s no need to drag your finger to select other features. Just tap where you want to tap and all is well. A secondary, smaller display on the right of the screen allows for two-feature monitoring, while a similar secondary touchpad makes it easy to swap screens around. And Acura nailed its natural-speech recognition software, which took demands as diverse as “Call my brother” and “Find me a White Castle near Indianapolis.”
Pricing for the 2019 Acura RDX starts at $37,300 for the base model, with SH-AWD adding $2,000 to the price. The RDX Technology will ask $40,500, while the new-for-2019 A-Spec trim level will be $43,500. The whole-hog Advance costs $45,400, rising to $47,400 with SH-AWD. That means an RDX loaded to the gills should cost several thousand dollars less than its closest European competitors, giving Acura the nod in terms of features per dollar.
With all the ride comfort, luggage space, and interior quality of its predecessor, the 2019 Acura RDX should appeal to Acura’s more thoughtful buyers (and we doubt the company is in any danger of screwing up the reliability quotient, even with the turbocharged, well-geared new powertrain). And thanks to the RDX’s emotive new styling and zesty dynamics, we’d say the company probably achieved its goal of expanding the nameplate’s appeal beyond those logical virtues of efficiency and dependability. Is it a return to form for a company that once offered value-priced, fun-to-drive luxury cars? We sure hope so.