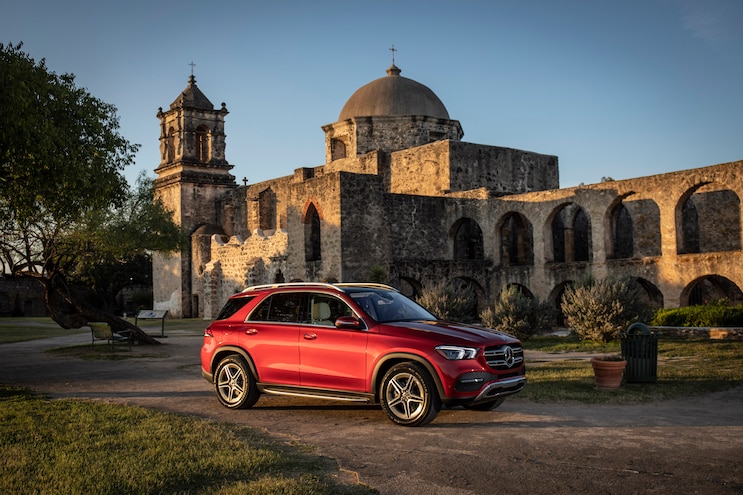 Mercedes-Benz and its predecessor companies have been building utility vehicles since the 1896 Daimler Motor-Lastwagen, a vehicle the company claims is the world’s first pickup. Since then, Mercedes-Benz has produced such legends as the Unimog medium-duty utility truck, the G-Class military-turned-luxury SUV, and the 1998 ML, a body-on-frame midsize sport ute with an available low-range transfer case and loads of on-road luxury.
Well-to-do families flocked to the M-Class SUV in droves, and the Mercedes practically invented the luxury sport-ute class overnight, predating the BMW X5, Range Rover Sport, Porsche Cayenne, and Cadillac Escalade. Priced higher than the Jeep Grand Cherokee, the M-Class still retained a reasonable amount of off-road capability—showcased amply by the trucklet’s starring role in Jurassic Park: The Lost World. Available with a kids-only third row of seating, that first M-Class was versatile, rugged, and much more refined than the G-Class.
Benz doubled down on comfort when the SUV was redesigned for 2006 and again for 2012, at the expense of some of that off-road capability. And when the M-Class was facelifted and renamed GLE for 2016, its on-road performance was peerless, but it was no longer the camouflaged, knobby-tired movie star it once was. 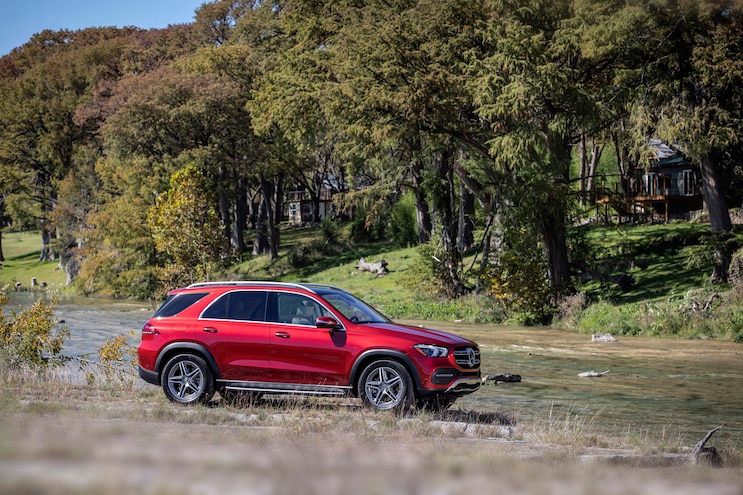 View Photo Gallery | 15 Photos
Photo 2/15   |   First Drive 2020 Mercedes Benz GLE Class View
Keen to reaffirm the SUV family’s world-beating image, Mercedes has reintroduced two of those features on the all-new 2020 GLE-Class, the fourth-generation version of the vehicle that used to be called ML. Now available in the U.S. with a third-row seat and selectable low-range transfer case, is the new midsize Mercedes a worthy successor? Mercedes-Benz flew us to the Texas hill country to find out.
Foremost, we’re not naïve. We know most Mercedes-Benz customers will use their fancy new GLEs as urban commuters and extra-urban road trip machines, not Dakar-conquering off-roaders. Fittingly, Mercedes-Benz planned the route to showcase the GLE’s floating-on-a-cloud ride comfort and reasonable nimbleness, rather than its rocky-road zest—hopefully our friends at Four Wheeler will get a chance to test the latter soon. Nevertheless, we did get a chance to point the GLE down some dirt roads and over a few water crossings to sample its surefootedness. More on that later.
Driven like a Mercedes, it’s all but impossible to find fault with the GLE. We started our day in a GLE 450, the current model line’s range-topper until the AMG folks give us a GLE 53 and GLE 63. The GLE 450 comes equipped with a 3.0L turbocharged I-6 and Benz’s 48V EQ Boost mild-hybrid system. With 362 hp from the engine and up to 22 added ponies from the electric motors, the GLE 450 boasts buttery-smooth acceleration. That turbine-like thrust is due to 369 lb-ft of torque available from 1,600-4,000 rpm and routed through the standard nine-speed automatic. It does our enthusiast hearts well to see Mercedes-Benz returning to the straight-six engine layout, which is inherently balanced and rich in low-end torque—no untoward vibrations here! 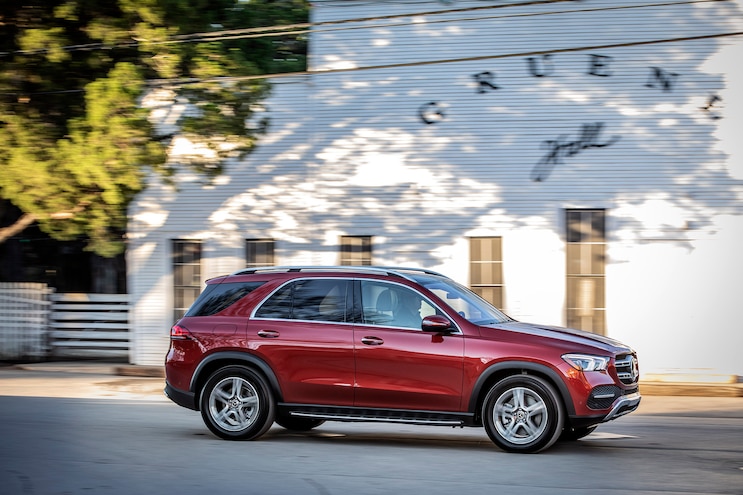 View Photo Gallery | 15 Photos
Photo 3/15   |   First Drive 2020 Mercedes Benz GLE Class
The GLE 450 comes standard with Mercedes’ 4MATIC all-wheel drive, and in this configuration, a variable clutch pack allows the system to send up to 100 percent torque to either the front or the rear axles. Torque vectoring also apportions power to the right or the left wheels, inducing under- or oversteer as appropriate in sporty driving. This action was all but imperceptible, as the GLE 450 simply got down to the business of handling corners totally drama-free.
The top-spec tester we drove was a GLE 450 equipped with the last word in Mercedes-Benz suspension technology: E-Active Body Control. Powered by the SUV’s 48V electrical system, E-ABC controls each individual wheel’s articulation, allowing the GLE to actually lean slightly into corners—like a motorcycle—to counteract body roll. E-ABC also scans the road surface ahead to prepare the suspension for potholes or bumps in the road, softening each individual wheel as needed. The suspension system can be left in one of several drive modes (CURVE to counteract body roll, Sport or Sport Plus for zesty driving, and Comfort and Eco for a luxurious ride).
In addition, each wheel can be actuated manually using the system’s off-road features. For example, a driver preparing to cross a deep rut could drop one wheel in while tucking the other three up under the body, manually altering the GLE’s articulation as it crosses the obstacle. Another off-road bauble is the free-driving mode: If the driver gets stuck in deep sand, the GLE will bounce itself progressively higher while driving forward or backward to pile sand under the tires and free itself from the dunes. We only sampled those off-road features when parked in a lot, but Mercedes-Benz has video that proves the system works at getting the GLE unstuck. 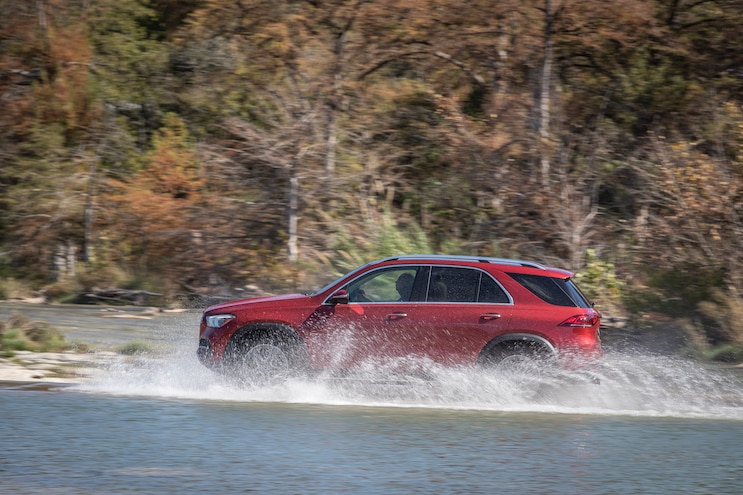 View Photo Gallery | 15 Photos
Photo 4/15   |   First Drive 2020 Mercedes Benz GLE Class In Water
As much as we loved driving the GLE 450, stepping into a base-model GLE 350 was an exercise in hiding disappointment. That model’s turbocharged 2.0L I-4 is perceptibly down on power, offering 255 hp at 5,800-6,100 rpm and 273 lb-ft between 1,800 and 4,000 rpm. Though the torque curve is admirably broad, there’s just not enough juice coming from the engine to muscle the solid-feeling SUV down the road with anything but mediocrity. Furthermore, compared to the I-6’s jet-engine smoothness, the little I-4 grumbled up to speed and shuddered on hard downshifts. While it might be adequate in a vacuum, we think a Mercedes-Benz customer’s money is well spent on upgrading to the GLE 450. Commendably, the GLE 350’s standard steel-sprung suspension still rides very smoothly on even bad road surfaces, proving that there’s more to a Mercedes than a powerful engine.
Both GLE 350 and GLE 450 come with attractive new styling that ditches the old SUV’s angles and edges for smoother and rounder curves. Mercedes-Benz’s new styling language wears itself well on the GLE, which retains its distinctive C- and D-pillar styling with wraparound-effect rear glass. The body’s distinct fuselage shape and SUV-signature front-mounted star emblem recall heritage models in Benz’s lineup like the Gullwing 300 SL and 300 SLR roadster, while also tying the GLE-Class in with the modern E-Class sedan. The GLE’s curves manage air well, giving the SUV a slippery 0.29 coefficient of drag, a number Mercedes claims is best in the segment and an improvement over the previous model’s 0.32.
Inside, the interior is thoroughly reworked, with traditional gauges replaced by a 12.3-inch floating instrument panel with digital gauges. Integrated neatly into the instrument binnacle is a second 12.3-inch display that serves as the infotainment center. Controlled via the touchscreen, a console-mounted touchpad, or “Hey Mercedes” natural speech recognition, the infotainment display is surprisingly easy to operate. We rarely used the touchpad to change settings because “Hey Mercedes” works so well that we could change interior temperature, turn on multi-contour massaging seats, or tune the radio simply by asking the car to do it for us. 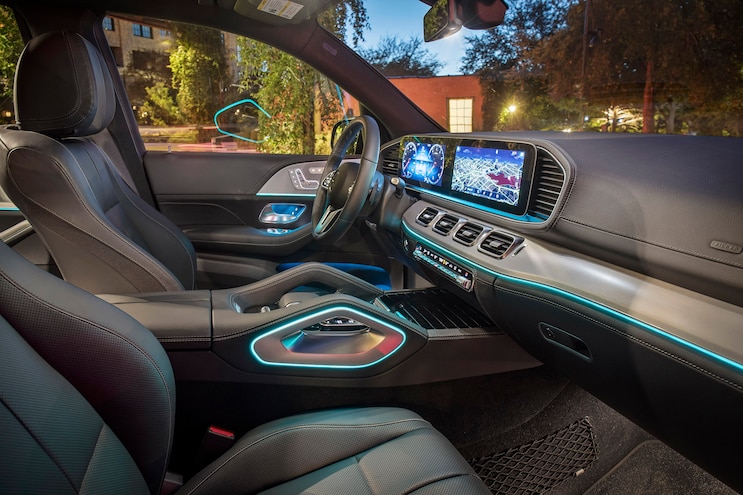 View Photo Gallery | 15 Photos
Photo 5/15   |   First Drive 2020 Mercedes Benz GLE Class Interior
The digital personal assistant is embedded in Mercedes-Benz User Experience (MBUX), the company’s sophisticated new infotainment technology. MBUX also incorporates two tiny thumb pads into the steering wheel, allowing the driver to operate either the multifunction gauge cluster or the infotainment display with his or her hands on the wheel. For a system with so much functionality, MBUX is surprisingly distraction-free. 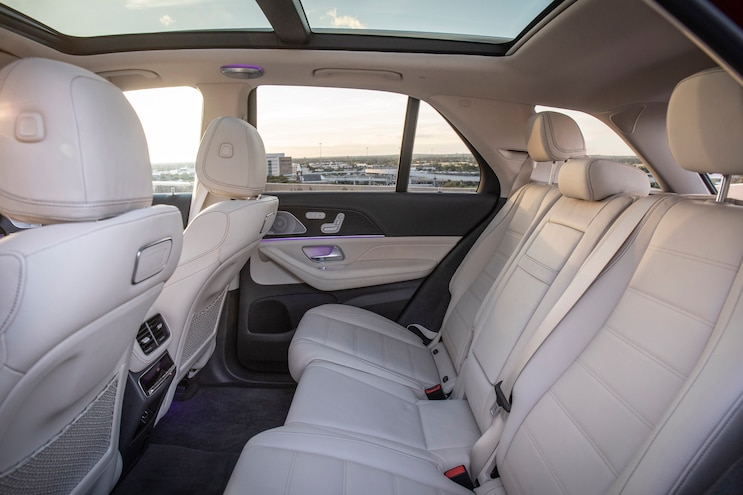 View Photo Gallery | 15 Photos
Photo 6/15   |   First Drive 2020 Mercedes Benz GLE Class Interior Back Seats
Space abounds for driver and front passenger, and it’s not bad in the second-row seats either. Seat comfort is first-rate, especially when trimmed in available designo leather. Unfortunately, we were able to find a few disappointing materials choices: the phony-feeling aluminum trim on the dashboard and center console and rubbery door panel tops. But otherwise, interior quality was excellent, with each and every button and control imparting a feeling of solidity.
The third-row seat was also a surprise, offering enough comfort for even a six-foot-tall adult to ride back there for short distances. While a long road trip would probably be out of the question for anyone (even small kids), the third row offers more space and comfort than that of the Lexus RX 350 L or Acura MDX. It also folds flat and out of the way, maximizing luggage room when not in use.
The overall impression we took from the all-new 2020 Mercedes-Benz GLE is that of poise and control. While there were a few minor disappointments (the aforementioned GLE 350 powertrain grittiness and some less-than-stellar interior materials), the SUV more than compensated with impressive road manners on any pavement surface, plenty of space for all passengers, and an incredibly intuitive infotainment system that’s packed with features. And with its newfound suite of off-road talents, this new GLE might as well be the proctor of a luxury-SUV master class on how to beat the world without losing your cool. The 2020 GLE promises good things for the future of Mercedes-Benz utility vehicles. 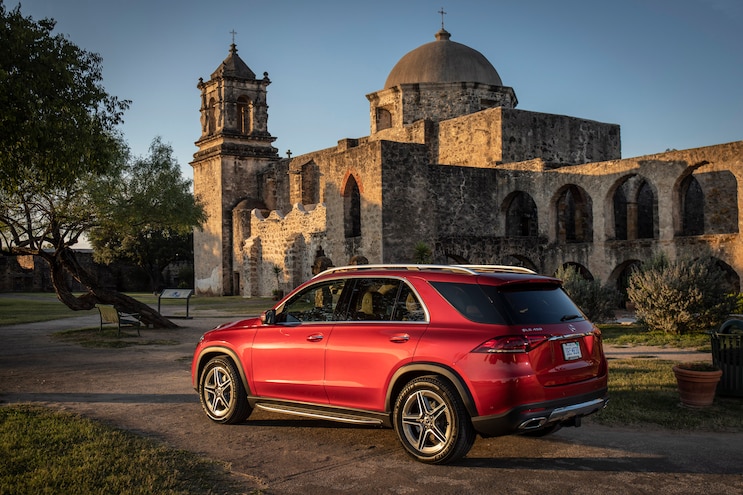