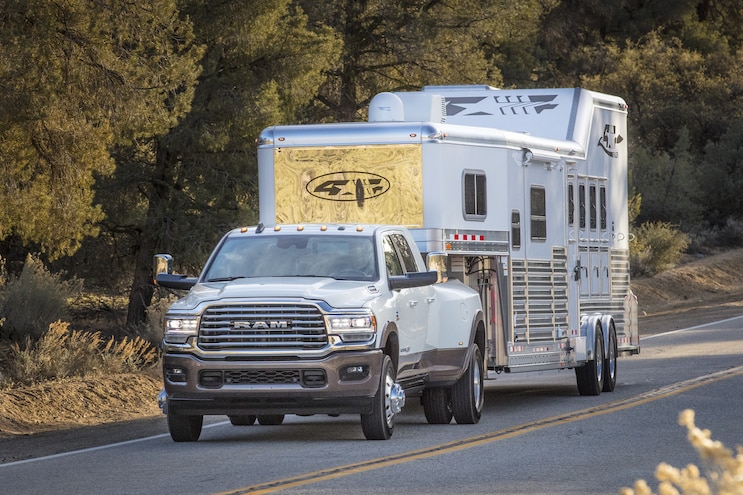 It feels like it was just yesterday that we were sitting in the audience at the 2019 North American International Auto Show in Detroit where the brass at Ram Trucks pulled the cover back on the all-new 2019 Ram Heavy Duty. Rightfully so, as it was less than two months from the time of that announcement until the day we received our first taste towing trailers with the new truck through the hills of Southern California, a timeframe which is almost unheard of.
Undoubtedly the showstopper of the big presentation was the new high-output Cummins I-6, now churning out a massive 1,000 lb-ft of torque. But don’t let the headline blind you; everything about the 2019 Heavy Duty line is new. Bodies are stamped from high-grade steel, interiors are updated to match the award-winning 2019 Ram 1500, all of the available drivetrains are improved, and capability is increased across the line.
With all of the Detroit automakers launching new or updated heavy-duty pickups this year Ram made a big splash by going first. Naturally we were beyond anxious to get behind the wheel and put some miles under our belts. Thankfully Ram obliged and provided a veritable smorgasbord of Rams for our perusing. We were able to sample all three drivetrains, three cab configurations, single and dual-rear wheel, and both ¾ and 1-ton trucks. We logged nearly 300 miles over the course of a day and what follows are our thoughts.

Our first 2019 Ram Heavy Duty experience came behind the wheel of a 2500 Mega Cab in Big Horn trim. The truck was powered by the company’s standard-output Cummins I-6 and saddled with a conventional trailer loaded to 11,000 pounds. Swap the cab from a Mega to a crew and this is likely the volume selling pickup. Over the course of nearly 200 miles we had the chance to tow up and down steep and windy grades, through crowded city streets, and along open highway. This gave us a true taste of what life with the new Ram Heavy Duty would be like.
View Photo Gallery | 52 Photos
Photo 2/52   |   032 2019 Ram Heavy Duty First Drive 2500 Mega Cab
First and foremost this truck is quiet, too quiet almost. Ram engineers went to great lengths to tune out unwanted sound from the cabin and the result was a nearly 50 percent reduction in noise. Cruising down the road feels more like driving a ½-ton pickup than a Heavy Duty. Thankfully there’s still a bit of the familiar Cummins engine hum that continues to make its way to the occupant’s ears.
We’ve already spent a year raving about the wonderful interior of the 2019 Ram 1500 so we’ll spare you here. We’ll just say this; it’s just as amazing in the Heavy Duty as it is in the light duty. From the highest trim to the lowest these trucks are very well appointed and overflowing with useful technology. The seats are comfortable, sound system incredible, and uConnect is one of the best infotainment systems available today. And with the amount of real leather, wood, and metal used in the higher trims these work trucks are putting many luxury brands on notice.
Towing an 11,000-pound trailer to us felt like we were hitting at the core of what ¾-ton owners would use their trucks for. The Cummins engine had no issue moving the load with ease and slowing the rig with either the engine brake or service brakes was effortless. We were given a confidence that told us we’d be okay no matter what the highway threw at us and we’re certain these same driving dynamics would carry over even at the truck's maximum capacity. Ride quality was a touch firm, but not to the point of discomfort. It’s worth noting that for 2019 Ram changed the 2500’s rear coil springs to a dual-rate design allowing for softer unloaded manors and a firmer, more controlled ride when loaded. This is exactly what we experienced. Steering was tight and precise and we didn’t note any of the wander typically associated with pickups equipped with solid front axles. And of course the Ram’s legendary tow mirrors continue to work fantastically.

Undoubtedly the most popular trucks on the drive route were those fitted with the high-output Cummins engine. To take advantage of the massive 1,000 lb-ft of torque one must order a 3500, select the optional Aisin 6-speed transmission, and fork over just north of $13k. Doing so will bring with it tow ratings of at least 30,000 pounds for most dual-rear wheel trucks, all the way up to a maximum 35,100 pounds. To test this Ram made three trucks available to us, all with dual rear wheels. These included a crew-cab four-wheel drive, Mega Cab four-wheel drive, and a regular cab two-wheel drive.
View Photo Gallery | 52 Photos
Photo 6/52   |   025 2019 Ram Heavy Duty First Drive 3500 Dually Regular Cab
The regular cab was loaded to the maximum at a full 35,100 pounds and required drivers to possess a commercial license otherwise they’d be relegated to the right hand seat. For those of us with normal licenses we were tossed the keys to the trucks with trailers weighing a paltry 17,000 pounds. Trying not to appear nervous we pulled out of the staging lot and headed toward one of the steepest sections of California’s Tejon Pass, commonly known as the Grapevine. Right out of the gate we could tell there was a big load out back. However, the Ram quickly settled into a groove with the powerful Cummins pulling up the hill like a freight train. We easily passed semis struggling to make the grade. So easily we had to ease off as to not run afoul of California’s 55mph speed limit.
On the downhill run we noticed that braking was far improved over previous generations, with the service brakes quickly and confidently bringing speeds down when called upon. Thankfully the service brakes were seldom used, as the engine’s exhaust brake did an even better job of keeping the vehicle and load in check. Our truck was also fitted with the optional supplemental air springs, which kept the truck level under load and helped to smooth out the ride. Speaking of ride quality we noticed the trucks were stiff yet not harsh. We could easily drive one of these Rams fully loaded across the country and not destroy our lower backs, which can’t be said of 1-ton pickups of generations past. Most impressive in this whole exercise was the fact that the regular cab truck hauling 35,100 pounds easily kept pace with the two rigs running half the weight. We figured it would be slowed at least a little by a trailer weighing twice as much, but alas we in the luxury trucks couldn’t shake the plucky little guy.

We’ve been unapologetic fans of the Ram Power Wagon since the beefy offroader burst onto the scene in 2005 reviving the decades old nameplate. With electronic locking front and rear differentials, an electronically disconnecting front sway bar, 12,000-pound Warn winch, Bilstein monotube dampers, aggressive Goodyear Duratrac tires, and an honest-to-goodness true manual-shift transfercase the Power Wagon appears more akin to an overgrown Wrangler Rubicon than its heavy-duty pickup brethren. As with the previous generation the only engine option is a 6.4L Hemi V-8, which is now backed by a ZF 8-speed automatic transmission. All Power Wagons are crew-cabs with a short cargo box. And please, quit asking when a Cummins version is coming.
View Photo Gallery | 52 Photos
Photo 10/52   |   040 2019 Ram Heavy Duty First Drive 2500 Power Wagon
We were given the chance to drive the 2019 Power Wagon both on and off-road and we can say with confidence that Power Wagon still reins supreme. While blasting across the open desert the ¾-ton pickup is still too heavy and under damped to really be considered a contender to the Ford Raptor’s class-of-one, though many in our line of work still like to make the comparison. High-speed desert whoops aside, the Power Wagon excels at every obstacle thrown its way. The truck’s unique and ultra flexible suspension makes quick work of cross ruts and dispatches ditches with ease. Its 410 horsepower turn sandy washes into exciting slot car tracks and the 429 lb-ft of torque make climbing steep grades a non-event. And should you, or let's be real a buddy in an inferior pickup, happen to cease forward movement at an inopportune time, help is tucked neatly behind the front bumper. To test the Power Wagon’s self-recovery abilities we stopped in the middle of a steep, slick, rutted climb, and proceeded to winch the rest of the way. Needless to say all worked flawlessly. Grip from the Goodyear Duratrac tires is more than adequate, though we still wish they were a touch larger in diameter.
Moving to pavement the Power Wagon is nearly as much fun to drive in the concrete jungle as the real one. Its tall stature gives way to a commanding view of the road, and from up high it’s easy to watch passersby glare in awe as you pass. As in the past the Duratrac tires give off a faint hum, but it's much less pronounced now thanks to the improved sound deadening found on the 2019 models. Power from the 6.4L Hemi V-8 is more than adequate to out merge most other traffic and the addition of two extra cogs in the transmission make transferring that power to the ground even more seamless than before. We are still in love with Ram’s new interior and having the option to add the 12-inch uConnect 4C system to Power Wagon adds copious frosting to an already delicious cake.

We have a couple regrets from our short time with the 2019 Ram Heavy Duty lineup. Those are that we didn’t get an opportunity to drive anything other than the Power Wagon unloaded, and that we didn’t have time to tow with the 6.4L Hemi V-8. Other than those we were blown away by Ram’s new lineup of Heavy Duty pickups. From the luxurious interiors to the tastefully sculpted exteriors there wasn’t a single thing that let us down. We’re sure with time we can nitpick our way to some complaints, and while some will scoff at this largely glowing review, rest assured that it is genuine. Ram has made improvement where needed while retaining what was working. From the boss to the greenhorn and the off-road junky to the hotshot hauler there is a Ram for everyone, and we’re excited to see where the brand goes next.