Ford Gets Used to Its Crossover-Heavy Future 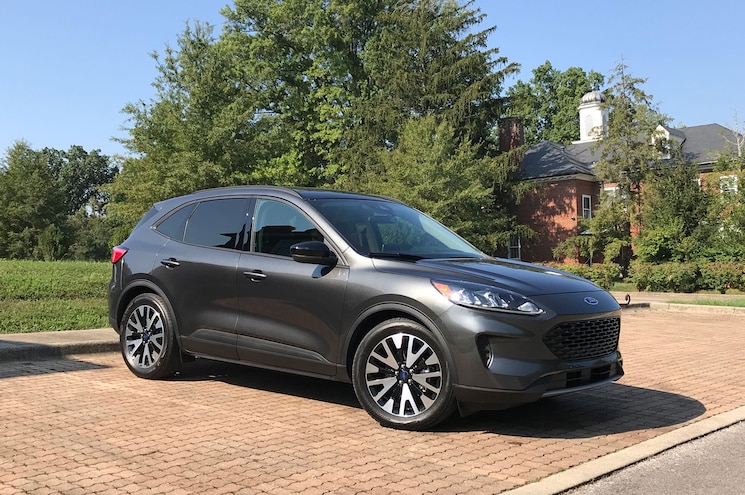 Ford is putting almost all of its passenger vehicle eggs in an light truck-shaped basket for the near future, discontinuing less profitable models like the Fiesta, Focus, and Fusion sedans in favor of all-new trucks and SUVs. Obviously, we live in a crossover- and SUV-obsessed time, and the Ford Escape has always been a strong seller for the company. In order to attract newly orphaned shoppers looking for a replacement for their sedans and hatchbacks, there's now an all-new 2020 Ford Escape to make them feel right at home, at least in theory.
In order to evaluate that idea (as well as pass judgement on the company's car-free future), we took a little trip to Louisville, where Ford's first-ever unibody SUV has been built ever since it was introduced for 2001. Once settled into the Derby City, we learned a bit more about what makes the 2020 Escape special, starting with its new C2 platform and totally redesgiend form factor and stance. 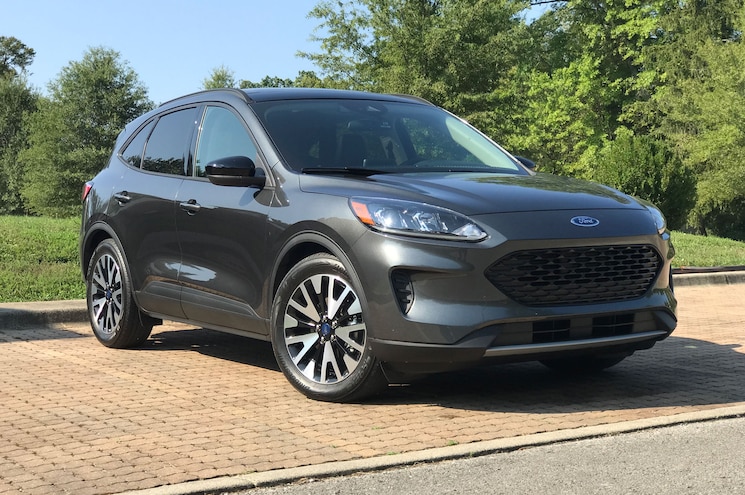 Ostensibly, in order to attract sedan owners, the Escape looks more carlike than ever before, with a front-end graphic and hatchback shape that look an awful lot like the also-redesigned (and not-for-U.S.) 2019 Focus. It's not just a styling illusion either, as the 2020 Escape is 2.4 inches longer, 3.8 inches wider, and just a bit lower, giving it a more planted stance. The new crossover's softer forms also make some philosophical room for a rugged-styled compact off-roader, nicknamed the "Baby Bronco," that will share the Escape's platform and elements of its powertrain. We hope to see that SUV soon. 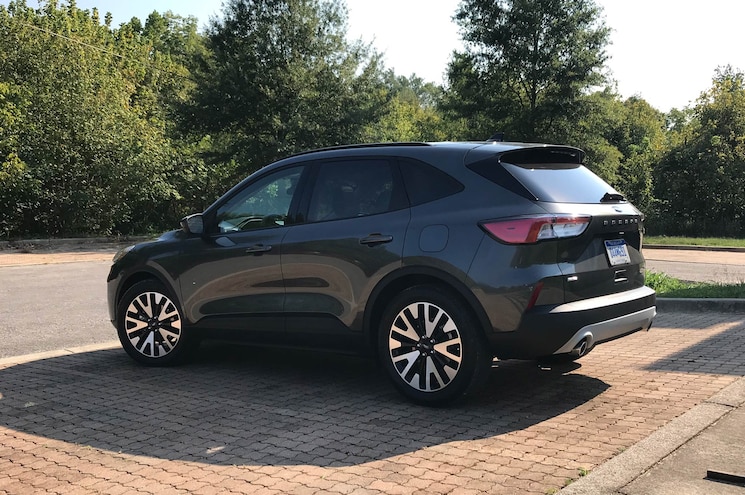 After the safety walkaround, we then got schooled on the new Escape's revised structure—high-strength boron and ultra-high-strength martensitic steel make up most of the passenger cabin for improved crash performance. That martensitic steel also comprises a roof-stiffening arc that allowed designers to make the A-pillar thinner for improved visibility. And the tauter structure also pays handling dividends, which meant Ford could put a more comfortable isolated rear subframe in the Escape without compromising responsiveness. Added sound deadening under the vehicle, an acoustic front windshield, and improved aerodynamics also promise reduced noise, vibration, and harshness (NVH).

Escaping Into the Wild 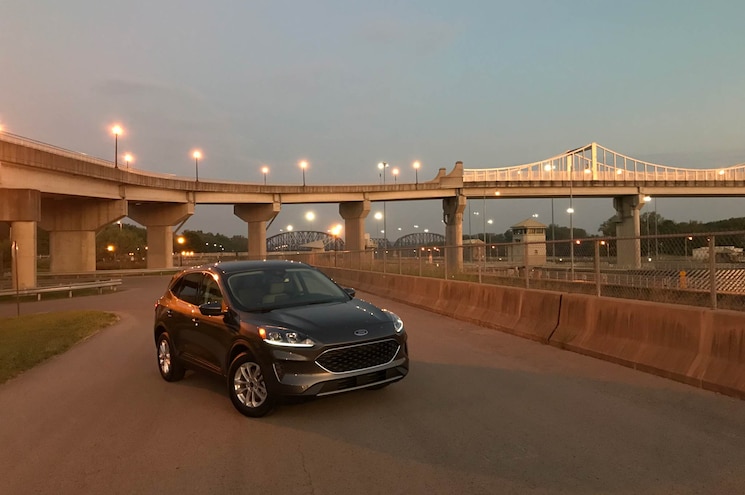 With our post-seminar expectations high, we took possession of a very well equipped 2020 Ford Escape Titanium, powered by the Escape family's optional 2.0L EcoBoost turbocharged I-4. This engine is a significantly revised version of the mill found in previous Ford Escape products, boasting a targeted 250 hp and 280 lb-ft. Our other test vehicle was a more modest Escape SE with Ford's new-for-2020 1.5L EcoBoost I-3, which comes standard in all non-hybrid models and offers 181 hp and 190 lb-ft. Once settled into the Titanium's 10-way power adjustable driver's seat, we hit a few curvy roads to test its mettle.

Our first impression of our loaded tester was one of surprise at the power available underfoot. With the drive selector set to Sport (Normal, Eco, Slippery, and Snow/Sand are also available), the 2.0L turbo was almost too jumpy in normal driving. But on some of Kentucky's twistier stretches of country road, the Sport setting earned its keep, with snappy downshifts, quick throttle response, and plenty of power throughout the rev range. New-to-Escape electric power steering is numb (very few manufacturers get electric assist correct), but the revised and retuned suspension under the new crossover absorbs bumps and undulations well. Back on the highway and set to Normal or Eco, the powertrain disappears into the background, executing passing maneuvers with ease.
However, it was on the highway that we discovered the first chink in the Escape's armor. The stretch of six-lane freeway on which we found ourselves was undergoing some construction, which meant gritty, textured concrete and grooved asphalt, and in those conditions, the amount of boomy harshness that made its way into the cabin was jarring. 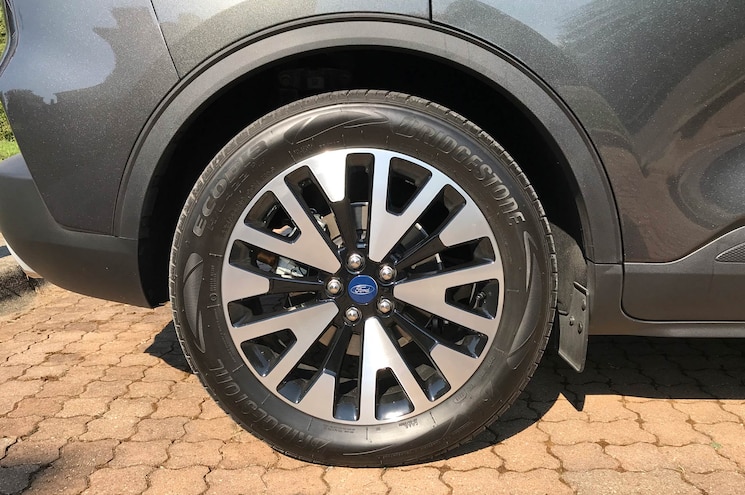 On smoother sections of blacktop, the noise was much less prevalent, leading us to believe the unpleasant behavior is the result of selecting low-rolling-resistance tires for the Titanium's 19-inch wheels. Unfortunately, we noticed the same qualities in our drive of the Escape SE and its 17-inchers: quiet enough on smooth roads, but decidedly unpleasant on harsher surfaces.

Our SE tester's 1.5L turbo I-3, though the base mill in the Escape lineup, might actually be the Goldilocks of the enginehouse. It produces nearly instantaneous torque, making the three-banger's 181 horses feel like they've been hitting the gym extra hard. And even in aggressive, mixed driving, the 1.5's trip computer said we'd achieved about 30 mpg, well up from the 26.5 we experienced in the 2.0. 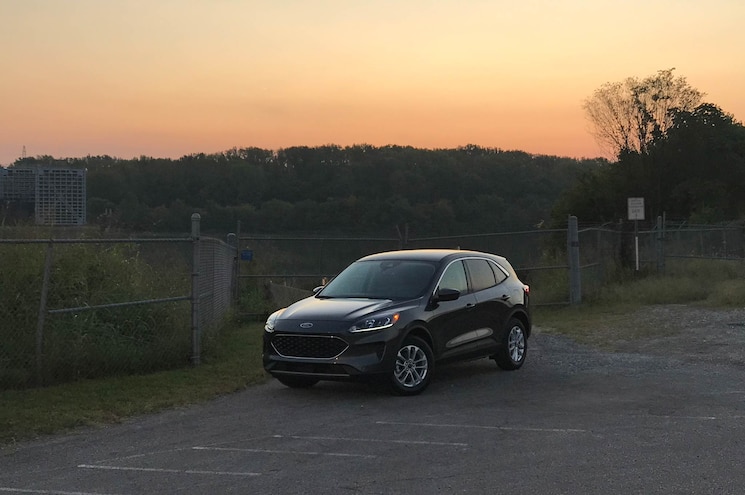 Our one complaint about the base engine? The gearbox seeks the highest possible gear for efficiency, but it doesn't downshift quickly enough in response to throttle application. The result is a lot of driveline vibration from just off idle to about 1,700 rpm as the rickety three-cylinder bogs its way into its powerband. Putting the Escape into Sport mode solved the problem, so a smoother and more pleasant driving experience is just a TCM tune away. Our testers were pre-production, so maybe Ford will dial in slightly more enthusiastic transmission defaults before the 2020 Escape hits dealers.

The interior of the 2020 Ford Escape has been completely redesigned to go along with the sleeker, almost Porsche-like exterior. Ford's modern design language shows up in the freestanding 8.0-inch touchscreen that comes standard on Escape models SE and above, and that infotainment system is optimized with Apple CarPlay, Android Auto, and available Ford embedded navigation. Audio offerings are sufficient, with a top-shelf B&O Play 10-speaker sound system delivering nice highs and decent lows.
Front seats are supportive and comfortable, and we didn't experience any soreness or tiredness after a full day of driving. Heated seats are available on most trim levels, but not even the Platinum gets ventilated seats, optional or otherwise. Where the 2020 Escape's interior really excels is in rear-seat space. Some clever engineering has teased the rear seat to be far more capacious than the outgoing Escape's, improving comfort and reducing claustrophobia for rear passengers. Width across for three passengers is probably tight, but two have more than enough space.
What's more, that rear seat slides fore and aft about six inches, with up to 37.5 cubic feet of space in the cargo area with the seat all the way forward and more legroom than a 2019 Chevrolet Suburban with the seat all the way back. The wide, flat cargo area can also accommodate a surprising amount of stuff—Ford showed off by stuffing six full-size golf bags back there. It wouldn't be hard to take a family of four on a long road trip, something that couldn't be said of the old Escape.
The fly in the interior ointment is the new SUV's unfortunate use of hard-touch plastics. That's most obvious in the rear cabin, where the entirety of the rear door inners are made from rock-hard plastic that screams "cheap." Seriously, the panels back there are worse than those of the 1996 Taurus your author grew up in. Up front, a leather-wrapped wheel on some models and added padding in the dash top, armrests, and upper door panels help ease the cost-cutting pain, but the interior still seems like a low-rent place to be, particularly compared against the stellar Mazda CX-5. People trading "up" from the soon-departing Fusion will not be pleased. 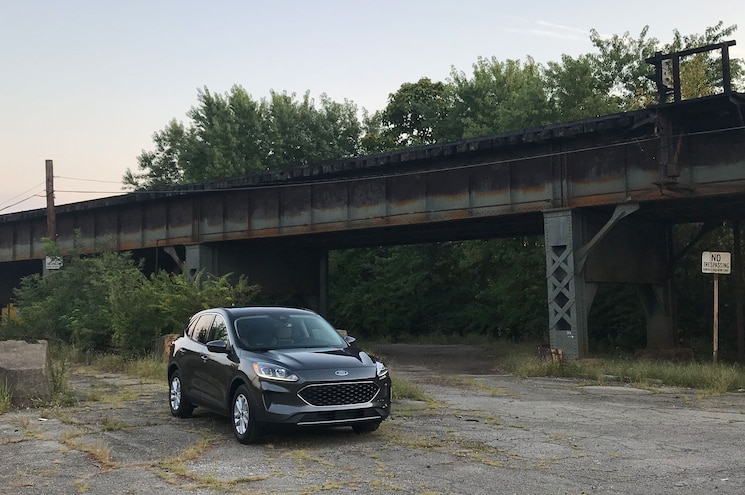 Ford is rightly proud of the Escape and its effect on the Louisville economy. The popular and hot-selling SUV has been one of the company's best performers in the showroom, with 4.5 million examples sold since 2001—almost 99 percent are still on the road, the company claims.
And the 2020 Ford Escape should do nothing to blunt that popularity, with two fine EcoBoost engine options (hybrid models, both conventional and plug-in, are on their way too). The new SUV is efficient and reasonably fun to drive, and we have a lot of nice things to say about it.
Our smart money rests on a well-equipped Escape SE—fitted with all-wheel drive, Co-Pilot360 Assist, and snazzy cloth seats, our ideal machine costs about $32,000, which strikes us as a decent value. Keeping the price a bit low also blunts some of the NVH and interior quality concerns. And it allows the Escape's new owner to focus primarily on what the SUV does right—responsive performance, impressive rear-seat room, a massive cargo area, and loads of standard safety features. 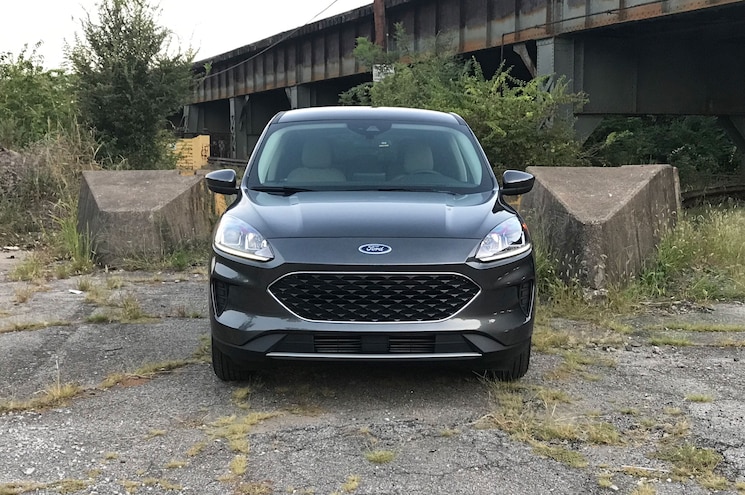