It’s that time again. With an opening in our long-term test fleet, and after some serious brainstorming, we decided that a specimen from the midsize category would be a perfect fit. We already have a prime 1/2-ton example in our 2015 Pickup Truck of the Year–winning Ford F-150, and we’ve got the 3/4-ton fans covered with the Ram 2500 Power Wagon. The only question remaining was which midsize, since it’s an extremely hot segment at the moment. With Colorado, Canyon, and Tacoma being all new, we decided to buck the trend and reached out to our friends at Nissan for a ’16 Frontier. Our goal was to show over the course of a year that this most senior midsize still has what it takes to be competitive.
For our testing, we ordered the Frontier in a configuration that we felt to be a good combination of what most customers would purchase, along with one feature that was just for us. We started with a crew cab in Pro-4X trim, which got us an impressively long set of standard features. Under the hood is a 4.0L V-6 engine that cranks out 261 hp and 281 lb-ft of torque. While it comes up a touch short on horsepower versus the Tacoma’s 278 hp and Colorado’s 305 hp, the Frontier trumps both of them where it matters with 16 more lb-ft of torque than the Tacoma and 12 more than the Colorado. Not bad for a 10-year-old engine. The one feature that we chose just for our tastes was a six-speed manual transmission. While most people will choose the automatic, we prefer to row our own gears, and only Nissan and Toyota offer a manual behind their V-6. 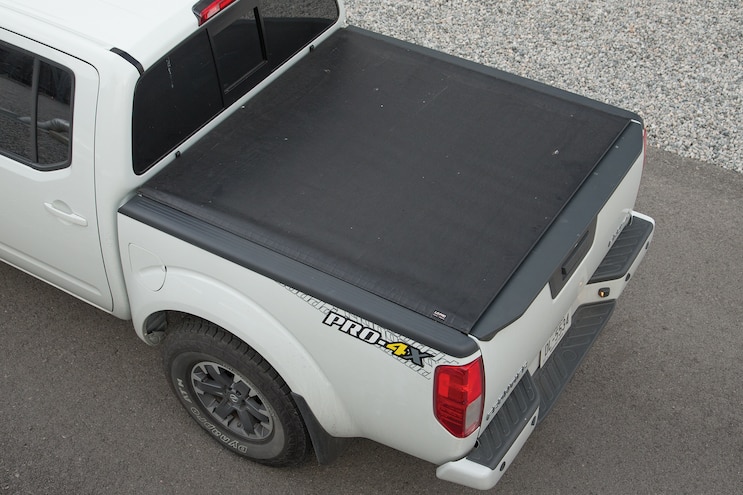 View Photo Gallery | 5 Photos
Photo 2/5   |   2016 Nissan Frontier Pro 4X Tonneau Cover
To protect our cargo from the effects of El Niño and the wandering eyes of passerbys, we added a Lo Pro QT roll-up tonneau cover from TruXedo. Installation is a simple bolt on and took less than half an hour. This would make an excellent factory option, hint hint.
Turning inside, the Pro-4X comes with just enough amenities to satisfy 2016’s discerning buyer. Seats are cloth, though leather is available in the higher SL trim, and the ones in front are heated. A premium Rockford Fosgate 10-speaker audio system is included, as is a 5.8-inch color touch screen with NissanConnect navigation and mobile apps, as well as voice control. The steering wheel and shift knob are leather wrapped while unique white stitching and “Pro-4X” embroidery distinguishes it as such.
Since taking delivery of the Frontier we’ve logged just over 4,500 miles, which has been comprised of city, highway, and off-road driving. Thus far we’re extremely pleased with the truck’s performance in all disciplines. It’s a comfortable driver, competent off-roader, and has been returning respectable fuel economy. We had one issue shortly after delivery that caused a persistent check engine light. We pulled the code and determined the issue to be a faulty oxygen sensor, which we then had replaced under warranty at 1,500 miles. Aside from the O2 sensor, we’ve been chasing a rattle that can be heard when pulling into driveways at an angle. However, it’s not consistent and frankly may never be found.

View Photo Gallery | 5 Photos
Photo 3/5   |   2016 Nissan Frontier Pro 4X
The Pro-4X trim package adds a touch of style and loads of performance. Bilstein monotube shock absorbers dampen the harshest of terrain while an electronic locking rear differential keeps the truck moving forward at all times. Unique 16-inch aluminum wheels are wrapped in aggressive 265/75 Hankook Dynapro AT-m off-road tires
So far the little Frontier has proven to still be a solid competitor in the midsize space, proving once again to never rule out the old and wise in favor of young and flashy. We’re excited to see what the rest of the year brings!
Report: 1 of 4
Previous report(s): N/A
Base price: $31,640
Price as tested: $33,240 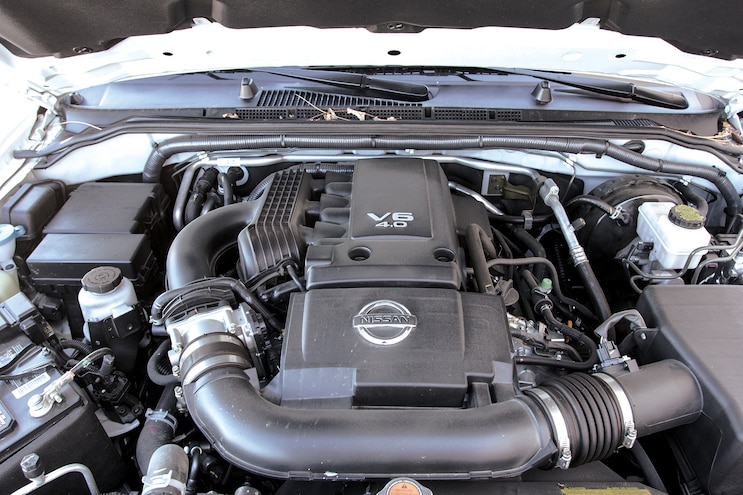 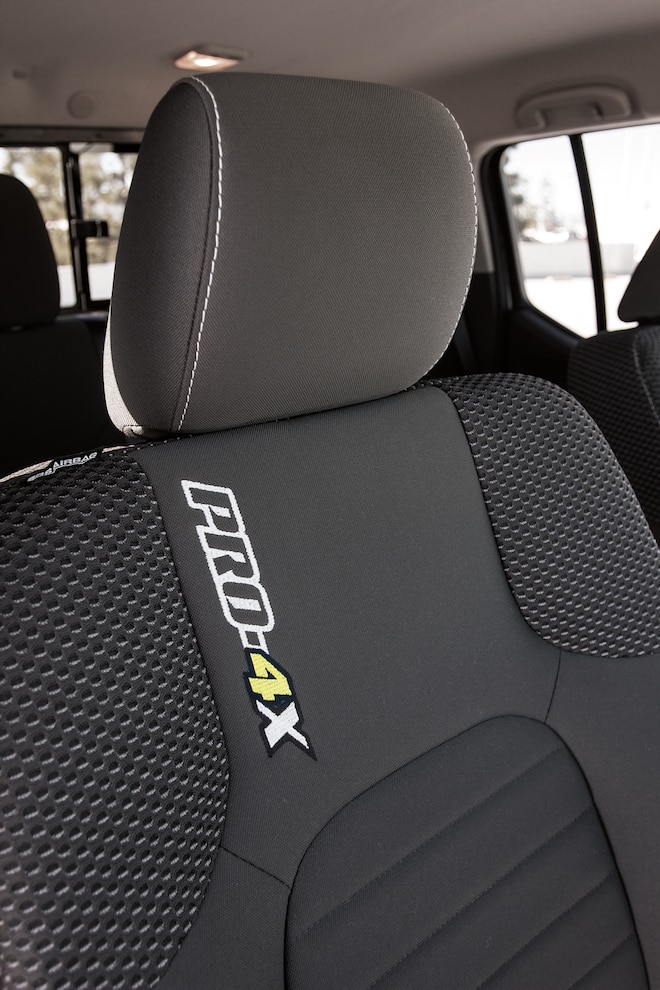 View Photo Gallery | 5 Photos
Photo 5/5   |   2016 Nissan Frontier Pro 4X Seat
Test Problem Areas:
There is an unidentified occasional rattle coming from the rear of the truck.
Logbook Quotes:
“The manual transmission is awesome! It adds such a fun, youthful, and sporty feel to driving the truck.”
“Is it just me or does the fuel gauge drop off awfully quick after half a tank? Range is good at over 300 miles, but the gauge sweep is quite bizarre.”
“Bed is a touch short being 5 feet long, but the Utili-Track tie down system is fantastic!”