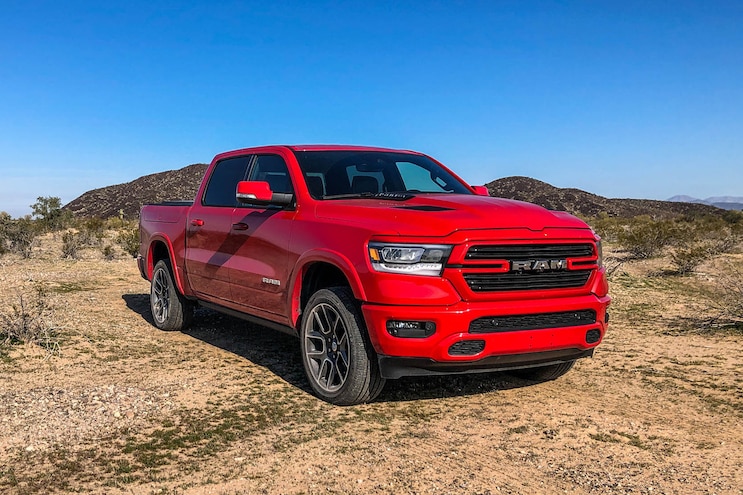 Due to our current circumstances, testing vehicles is obviously a challenge. That difficulty only comes from the fact that we're not driving anywhere. So, for this report we've decided to take a look at some of our 2019 Ram 1500's interior accommodations.
With the 2019 model, Ram went bigger almost everywhere. The truck's cab, in crew-cab trim, is 4 inches longer than the outgoing truck. It's wider as well. The center console has been upsized, as have the Ram Bins and Ram Boxes. Every storage compartment has been made more useful in some way. 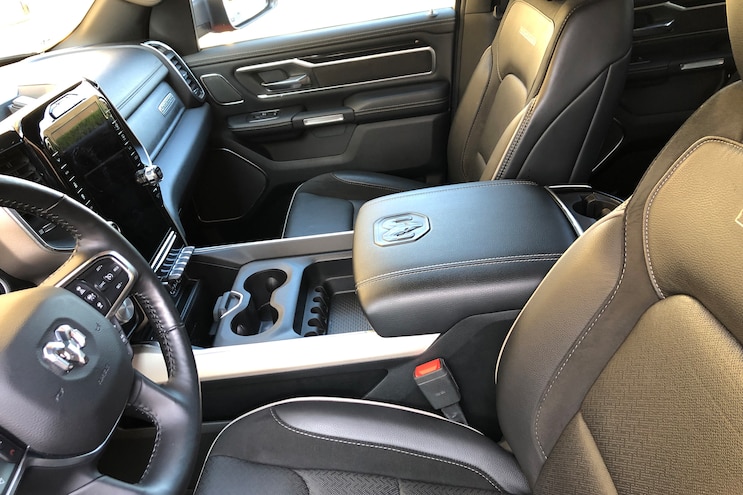 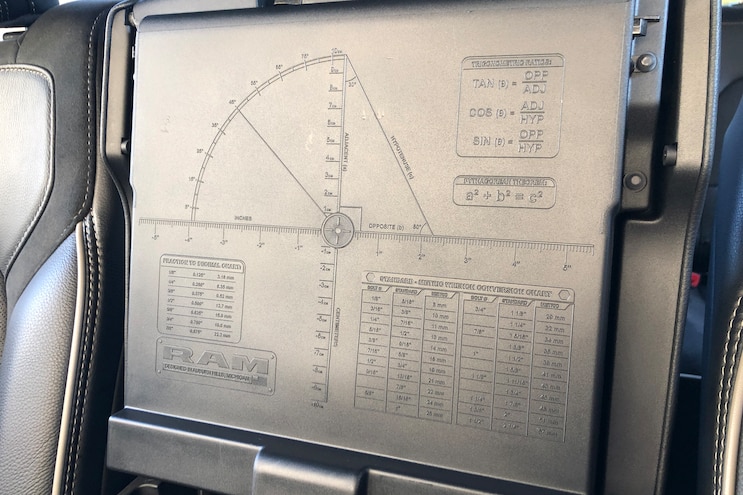 View Photo Gallery | 20 Photos
Photo 3/20   |   010 Long Term 2019 Ram 1500 Report 4 Of 6
Interestingly, we've found the small storage compartment above the glove box to be one of the most useful. We've used it to store some of the small trinkets that we use the most. The glovebox itself would also be a good option, however it's holding the Ram's owner's manual, which itself is the size of an encyclopedia from the '80s.
The least useful, in our case anyway, have been the Ram Bins that are hidden under the floor mat in the rear seat. These bins are plenty deep, but they are awkwardly shaped. When we've tried to load them with square boxes, it's proven quite challenging. Also, because we often have two small kids in the rear seat, the floor is used to store diaper bags and other necessary items. Parents, you know what we're talking about. 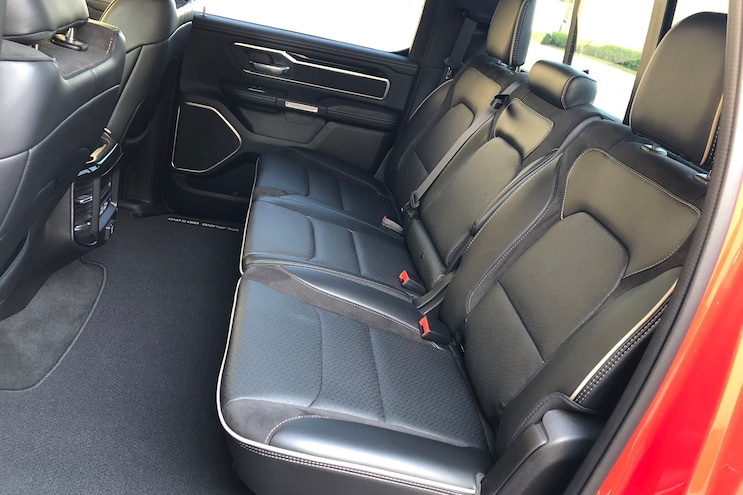 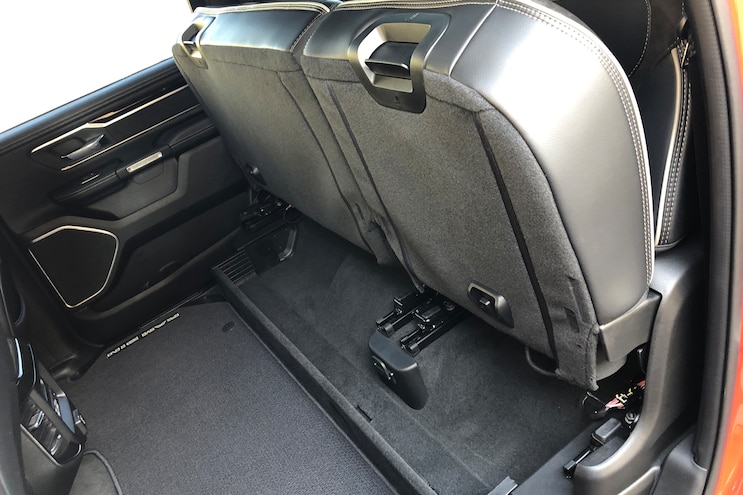 View Photo Gallery | 20 Photos
Photo 5/20   |   015 Long Term 2019 Ram 1500 Report 4 Of 6
This means the Ram Bins are rendered inaccessible most of the time. Still, for the right person, these hidden storage compartments can be a lifesaver. There are even aftermarket companies that make lockboxes that fit inside of them.
Where we're torn is the center console. It's larger, more useful, and totally modular now, all of which are great features for storing a multitude of junk. And that's just the issue; how much junk do you want to fill it with? The console is long but not very deep at the front. The rear can hold a bunch of stuff, but the large lid intrudes slightly. There are dividers to keep things separate, and the cupholder tray slides fore and aft. As lovers of the flow-through type center console since they were introduced, we've found ourselves being a bit hesitant to full fill the center console. Maybe it's because the Ram isn't our truck, and maybe it's because of its slightly odd shape. Either way, we've mostly kept just our fuel log clip board in the center console. Although,we have lost a few Yeti cups and water bottles in its bowels. Inside the console lid is another storage spot, one that we seem to have used more frequently to store small items like our toll road transponder, a pocketknife, important receipts, iPhone cables, and even a CD—remember those things? 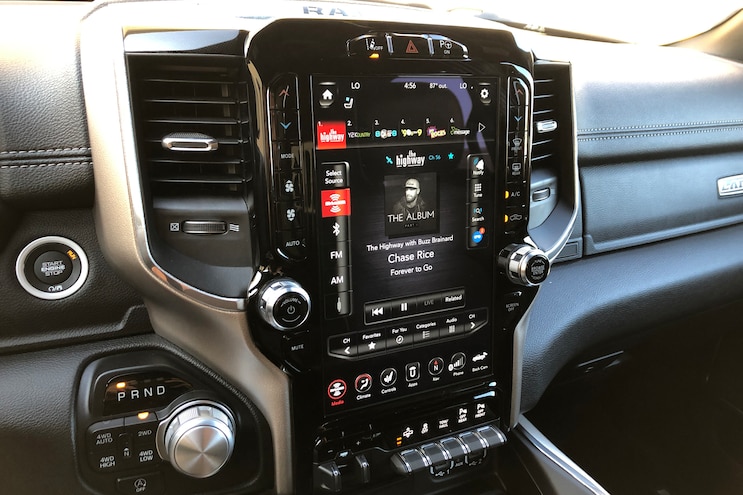 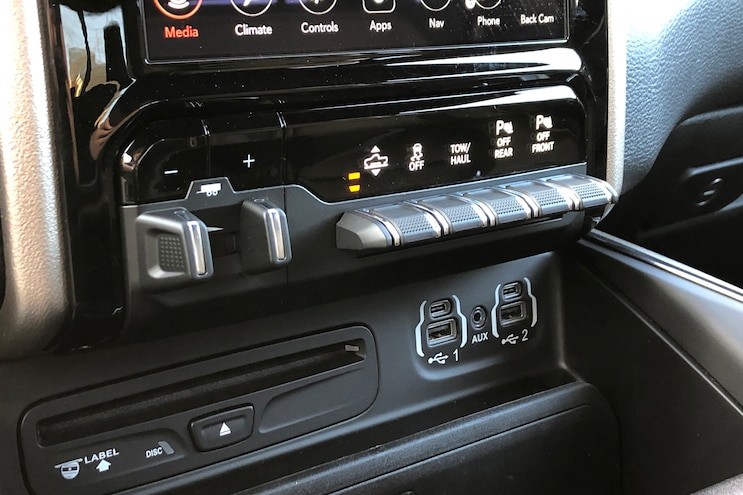 View Photo Gallery | 20 Photos
Photo 7/20   |   003 Long Term 2019 Ram 1500 Report 4 Of 6
We've been pretty impressed with the truck's available technology and connectibity as well. We'll get deeper into the safety systems and infotainment next time, but what's really pleased us is the sheer volume of available USB ports. The truck has four USB ports (two USB-A and two USB-C) in the front, four in the rear (two USB-A and two USB-C), and one (USB-A) inside the console lid. All of the USB ports in the front and one set in the rear are able to feed to the infotainment system, while one set in the rear and the one in the console lid are charge-only ports.
The truck also has a wireless inductive charge pad for cell phones in the front of the center console, cutely dubbed the "RamCharger". While it works OK with our normal-sized iPhone, we could see issues with the larger phones. We've also rarely used it because the truck has so many USB ports, and we frequently use Apple Car Play.
So far, we've been quite pleased with the Ram's available interior storage and connectivity features. We can tell that the designers really took seriously the needs of pickup owners in this day and age. Hopefully by the time our next report comes we'll have logged some quality miles on the Ram before our time with it comes to a close.

Previous reports:
Long-Term: 2019 Ram 1500 Report 1
2019 Ram 1500 Long-Term Report 2 of 6
How Well Does the Ram 1500 Tow?
Base price: $46,140
Price as tested: $67,020
Long-Term Numbers
Miles to date: 9,5062.0
Miles since last report: N/A
Average mpg (this report): N/A
Test best tank (mpg): 18.25
Test worst tank (mpg): 9.33 (towing)
Maintenance
This period: None
Problem areas: None
Logbook Quotes
"I really do love that there are so many available USB ports. And it's great to see a company providing USB-C ports as well as the older USB-A. "
"The Ram Bins in the rear seat floor are a great solution to the need for concealed storage. However, printing "Ram Bin" on the floor mat kind of defeats the purpose. "
"It makes me so happy that so many of the storage compartments have LED lighting built in. "
"I do wish the 110-volt power inverter outlet was up front in the center console instead of on the back of it. It can be hard to reach on the move."