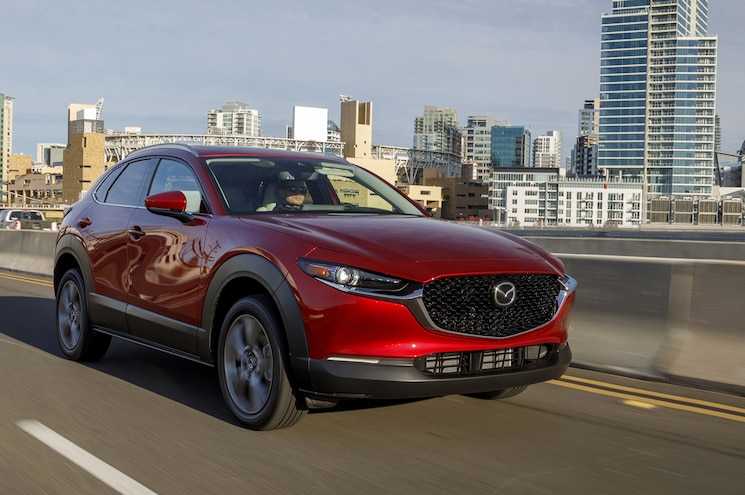 A few San Diego blocks into our daylong drive of Mazda's newest compact crossover, my (knowledgeable and highly critical) co-driver proclaimed that it felt "very good." We hadn't yet reached the eastbound freeway, let alone the twisty two-lanes where Mazdas typically shine, and she was already sensing its overall likability and singing its praises.
You know how some dogs and people can almost instantly ingratiate themselves when you first meet them? This all-new CX-30, which slides between the CX-3 and CX-5 CUVs (with a new two-digit model designation like some overseas Mazdas), came across that way to her that quickly. Then it struck me the same way when I took the wheel many miles later.
This 2020 CX-30 is powered by a 186-hp 2.5L naturally aspirated "Skyactiv-G" four—currently the most powerful among compact CUV standard engines, Mazda claims—and an identical 186 lb-ft of torque. We expect a more muscular turbocharged version down the road. It drives the front wheels (or all four with available intelligent "i-activ" AWD) through a six-speed "Skyactiv-Drive" automatic transmission. Yes, just six ratios when more widely spaced eight or nine have become fairly common, but it works well and offers both shift-lever and steering wheel paddle manual shifting for those (like us) who appreciate and use it on curvy roads. EPA economy ratings are 25 mpg city, 33 highway, and 28 combined, 24/32/27 with CDA (cylinder deactivation) on Premium trims with AWD, 24/31/26 mpg without. 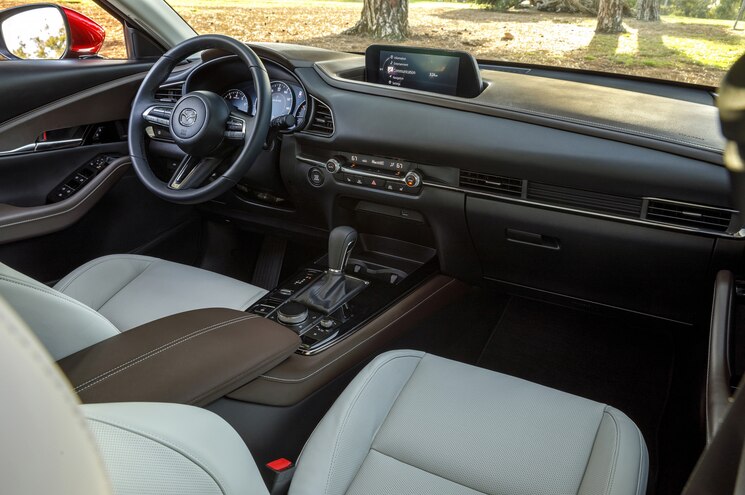 View Photo Gallery | 17 Photos
Photo 2/17   |   2020 Mazda CX 30 Interior 04
Styling is subjective, but we like the sleek, near-Italian "Kodo" ("Soul of Motion") look of the Mazda3 compact sedan and hatchback introduced earlier this year, and this Mazda3-based (same platform and powertrain) CX-30 brings that eye-pleasing design to this taller CUV with a coupe-look fastback roofline. Both front and rear are smoothly uncluttered, and its lovingly crafted, feature-filled cabin follows suit, as Mazda has been noticeably migrating further upscale from its former entry-level Asian market position with each new vehicle it launches.
Mazda vehicle dynamics, human factors (aka Human-Machine-Interface, or HMI), and NVH (noise, vibration, and harshness) guru Dave Coleman points out the lengths to which his team—and the engineers in Japan—have gone to ensure that its every switch and control feels smooth and natural. That's in addition to its cabin being remarkably conversation quiet, seats and driving position that are all-day supportive and comfortable, and so on. Their level of attention to every minute detail is truly impressive. And, as we both quickly perceived on our drive, it all works.
We found the non-turbo four's performance less than thrilling but more than adequate (with just two aboard) even in the 4,000-foot hills east of San Diego. Its steering was Mazda crisp and responsive; its road-hugging handling among the best in class, even when driven aggressively (despite the Mazda3/CX-30's new trailing-arm rear suspension instead of Mazda's previous multi-link arrangement); and its brakes were always strong and linear. We averaged 25.9 mpg on our first 61-mile leg, then 27.6 for our last, less-aggressive 81-mile leg. 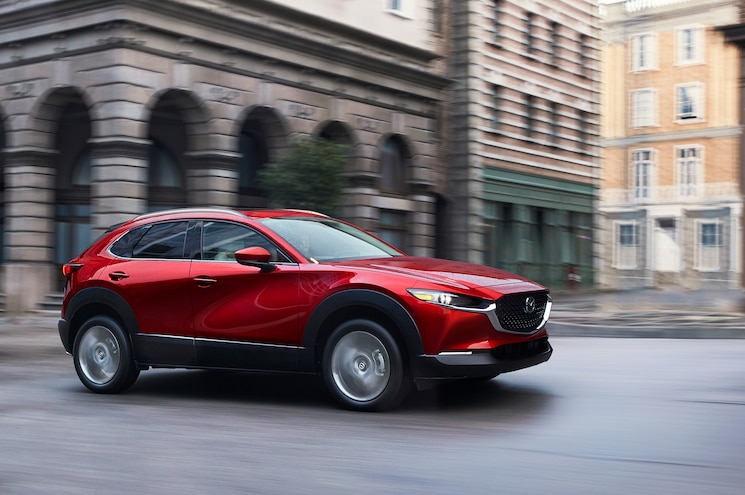 View Photo Gallery | 17 Photos
Photo 3/17   |   2020 Mazda CX 30 Exterior 04
We lamented Mazda's abandonment of a handy infotainment system touch screen (too distracting, they proclaim) in favor of just a central control knob surrounded by a quartet of hard buttons (Audio, Nav, Home and Back) but found it not too tough to learn and operate. You basically twist it to scroll through menu choices, poke it to select, then twist and poke again to find what you want. We beg to differ that it's less distracting than a good touch screen with large, easy-to-see and touch icons. You still have to watch, interpret and react to what's on the screen, but at least it offers an adjacent volume knob and jump forward/back buttons.
Among our few other complaints is tight rear-seat leg and knee room, at least behind tallish front occupants. Yes, it's a compact CUV, but some competitors better accommodate second-seat riders. Under its sleek, fastback roofline, however, the CX-30's cargo space is a respectable 20.2 cu. ft., and access to it is good through a large, deep rear hatch.
Coleman adds that its suite of safety and driver-assistance features are tuned to "respect, not override" the driver with less-obtrusive interventions. One welcome feature is a button that temporarily disables less-important systems, such as lane keep assist, while leaving key safety systems, such as Smart Brake Support, fully functional. And he touts the CX-30's response-enhancing GVC+ (G-Vectoring Control Plus), i-ACTIV AWD that shifts torque distribution to maximize traction, and its new Off-Road Traction Assist system, which senses off-pavement conditions and changes its algorithms to improve traction accordingly.
Priced between $21,900 for a base CX-30 and $29,600 for the top Premium trim with AWD, we see no reason why this great-looking, great-driving, right-size, affordable yet near-premium CUV should not be successful in its fast-growing and highly competitive segment.