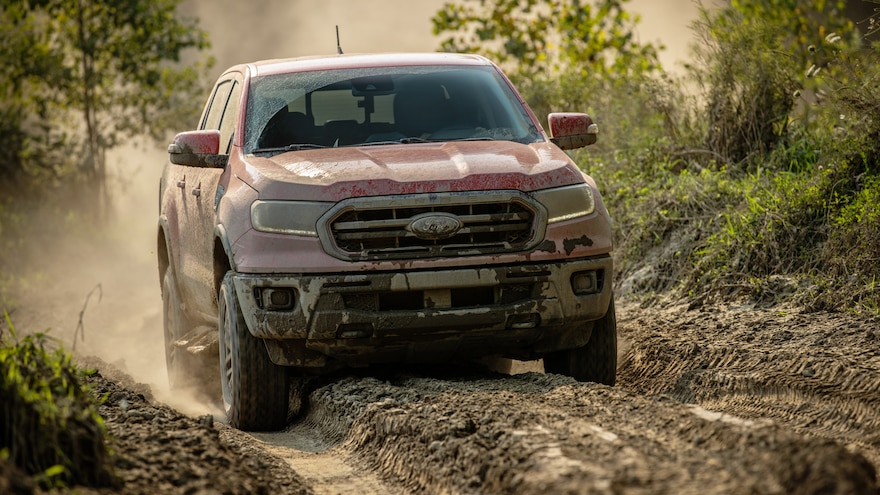 While we patiently await the unofficially official Ford Ranger Raptor, Ford's still-excellent Ranger has been relegated to playing in the sandbox with Colorado Z71s and Tacoma TRD Off-Roads with the company's FX4, while ZR2s and TRD Pros get to venture a little further down the trail. After announcing Tremor versions Super Duty and F-150, Ford unsurprisingly dropped news of the Ranger Tremor package, which we were recently able to get some seat time in.
With a philosophy of maintaining truck capability, comfort, and control, the Ford team went to work making the Tremor a meaningful upgrade over the FX4 package. As with all of the trucks in the class, the Tremor's suspension is one of the biggest areas of improvement. With retuned coils, redesigned front geometry, and new knuckles that are paired with aluminum-bodied Fox 2.0 monotube coilover shocks, the Tremor sits higher and gains a quarter of an inch of wheel travel to 6.5 inches. Out back, the single parabolic leaf spring has been dropped in favor of a multi-leaf setup and piggyback reservoir versions of the front shock. Rear travel increases by 1.2 inches to 8.1 inches. These shocks have progressive rebound end zone damping, which improves control at the limits during spirited off-road driving. 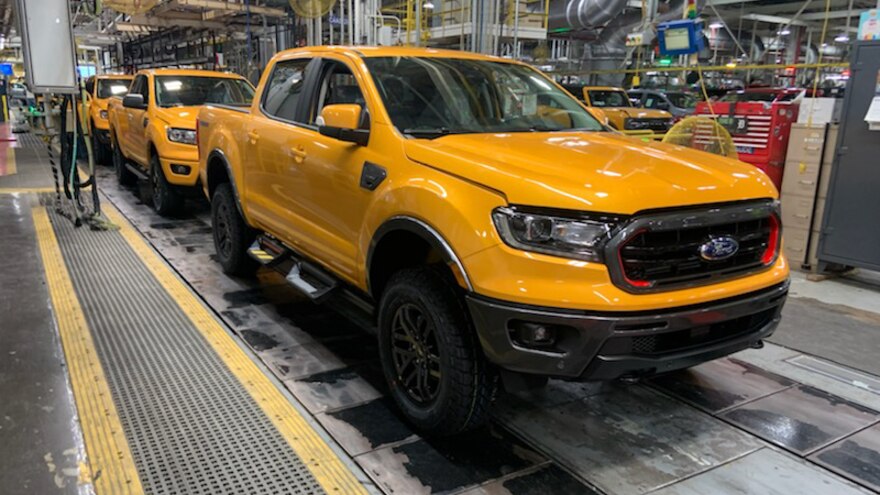 View Photo Gallery | 50 Photos
Photo 2/50   |   Ford Ranger Tremor on the assembly line at the Michigan Assembly Plant.
Despite the increase in off-road capability, Ford engineers worked hard to maintain the "truck" part of the Ranger Tremor equation, maintaining a class-leading 7,500-pound tow rating, as well as the impressive 1,430-pound payload capacity. This compared favorably to the Toyota Tacoma TRD Pro's crew cab/automatic rating of 6,400 pounds of towing and 1,165 of payload and the Chevy Colorado ZR2's crew cab/automatic/gas rating of 5,000 pounds of towing and 1,250 pounds of payload. 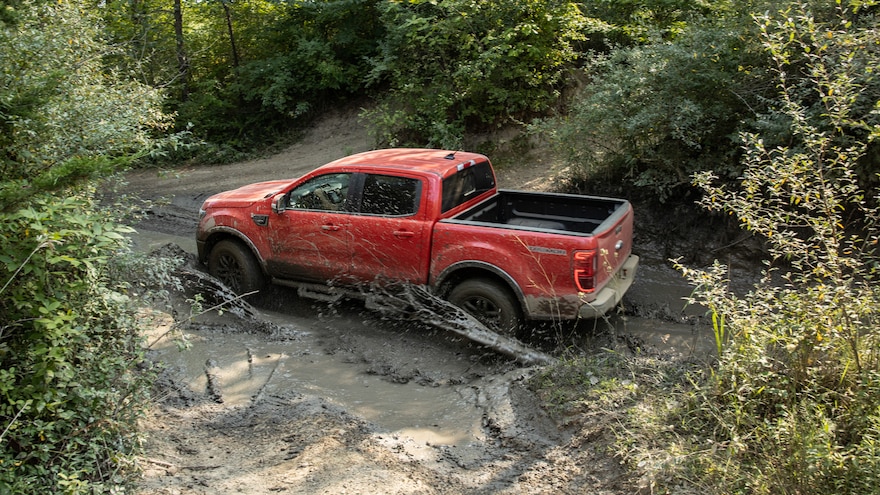 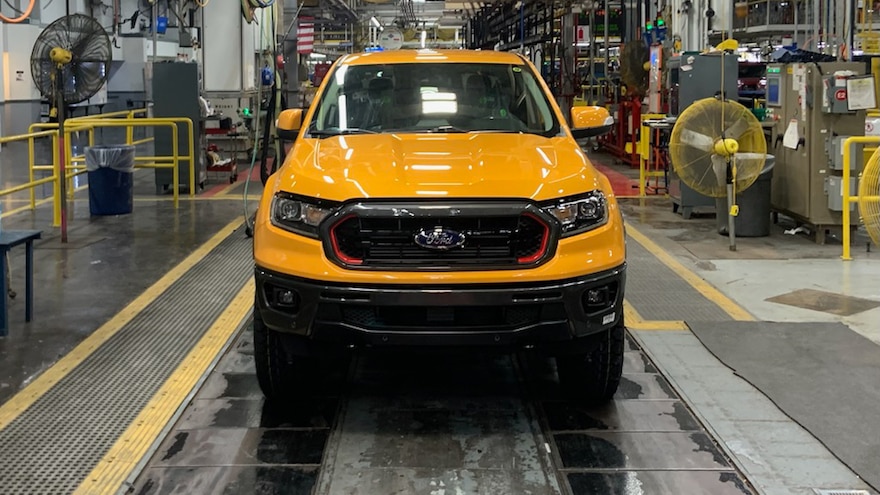 View Photo Gallery | 50 Photos
Photo 4/50   |   Ford Ranger Tremor on the assembly line at the Michigan Assembly Plant.
A full-size matched spare is nicely packaged under the bed and behind the rear axle. The Tremor features an approximately 1-inch-wider track width thanks to the increased wheel offset of the Magnetic-painted wheels, which are covered by beefier wheel lips. Other exterior cues include a unique grille, front and rear recovery hooks, optional body graphics, and removeable hoop-styled steps. 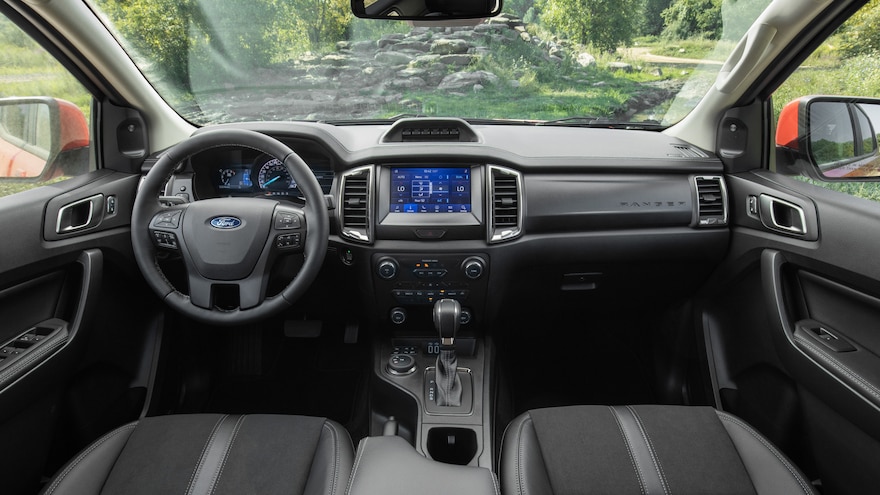 View Photo Gallery | 50 Photos
Photo 5/50   |   027 2021 Ford Ranger Tremor First Drive
The cab has also been massaged with Tremor goodness, including unique "Tremor"-embroidered seats with Miko suede inserts and black accents. Ranger Tremors also get a six-switch auxiliary switch bank to control aftermarket upgrades, such as lights and air compressors. Switches one through three are rated at 25 amps each; switches four through six are rated at 15 amps, 10 amps, and 5 amps.
All of this adds up to a truck that is engaging and fun to mob off-road. Despite only 6.5 inches of front wheel travel, the Ranger shocks work well and have what many midsize trucks don't, and that is rebound control, especially in the rear. The front and rear suspension feels balanced at moderate speeds and keeps the stiff chassis composed. "G-outs" are soaked up with ease. Ford's efforts to increase jounce travel and control are certainly noticeable from behind the wheel. 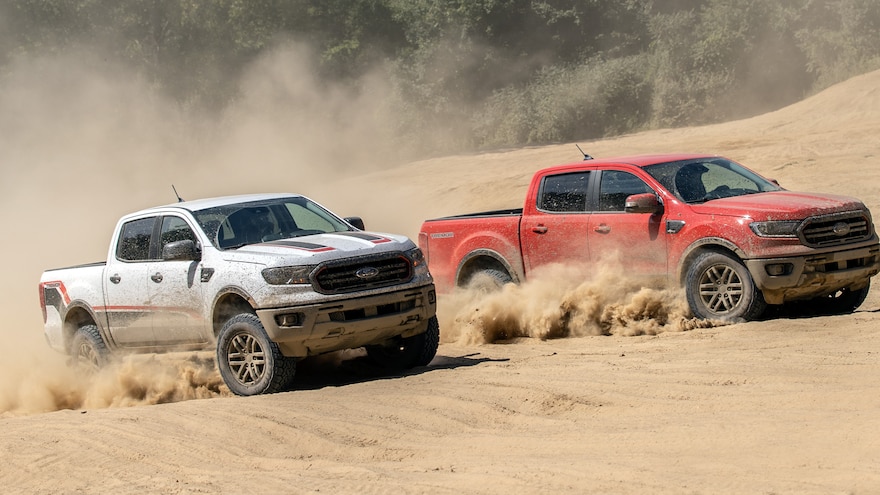 View Photo Gallery | 50 Photos
Photo 6/50   |   New Tremor Off-Road Package available on 2021 Ranger creates the most off-road-ready factory-built Ranger ever offered in the U.S., adding a new level of all-terrain capability without sacrificing the everyday drivability, payload and towing capacity Ranger owners expect.
We love that the rear locker can be used in any transfer case position and that Ranger has Ford's Terrain Management System with four settings. We played with different settings along a desert wash and found that our favorite combo was 4H, Sand mode, and traction control off, which allowed us the longest leash to have controlled fun. While the traction nannies did come in at the limit, there was a wide threshold at 50 mph to use all of the 2.3L four-cylinder EcoBoost's 270 horsepower and 310 lb-ft of torque to rotate the truck with the throttle and slide through corners. 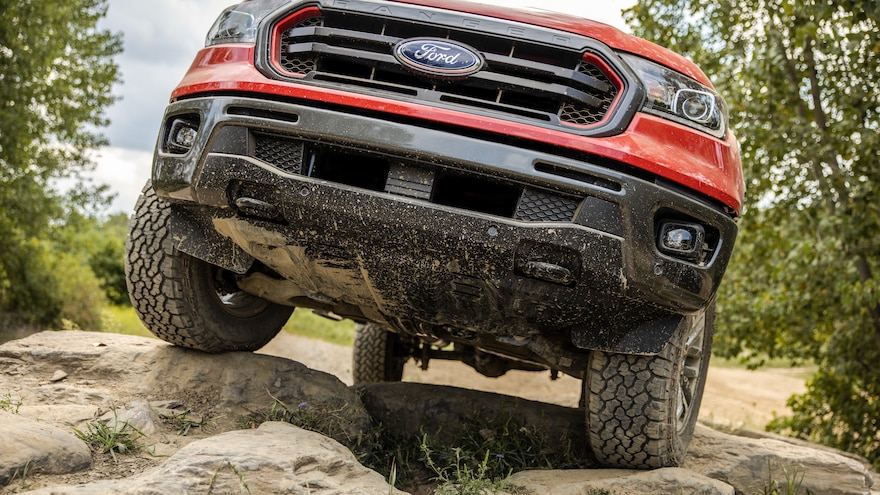 View Photo Gallery | 50 Photos
Photo 7/50   |   006 2021 Ford Ranger Tremor First Drive
Unlike on the road where the throttle pedal feels a bit wooden and slow to respond, the Ranger Tremor is lively off road and fun to carry speed with. The 10-speed automatic always feels like it is in the right gear, and the steering is accurate.
So, what does all this performance mean for on-road performance? Well, compared to the Chevy Colorado ZR2, which is tuned tauter on the highway, the Ranger Tremor is a marshmallow. While the ride is certainly comfortable for gobbling up miles of highway with cruise control on—and no one will complain about comfort—it is almost a little too soft for our taste. Ford softened the sway bar rate for off-road comfort, but that change can be felt on-road. Due to the varying expectations on ride quality, we aren't knocking the Ranger here, though it is something worth noting. 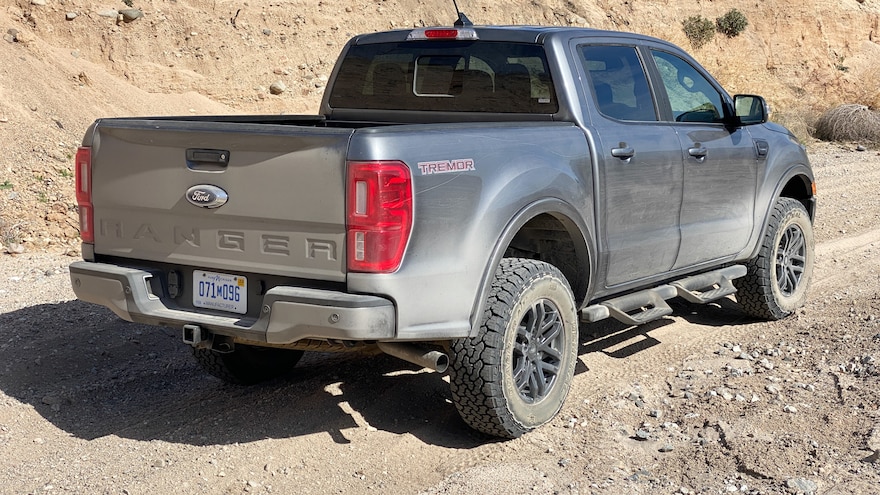 View Photo Gallery | 50 Photos
Photo 8/50   |   012 2021 Ford Ranger Tremor First Drive
One last piece to the Tremor story is price. The package itself is not a trim level and can be applied to either a SuperCrew Ranger XLT or Lariat as a $4,290 option. Our SuperCrew Lariat tester, which was well optioned, came to us with an as-tested price of $47,360 including destination, which is competitive for the class.
Overall, we are incredibly impressed with the Ranger Tremor and feel like it has catapulted Ford's smallest pick to the head of the class, in a number of areas. If you are looking for a well-equipped midsize pickup that has more capability out of the box than most people will ever need but can also serve you well in daily driving, you should take a long, hard look at the Ford Ranger Tremor. The Ranger Tremor will be available with 200 Ranger-specific dealer-installed accessories and will be built in the Michigan Assembly Plant in Wayne, Michigan. 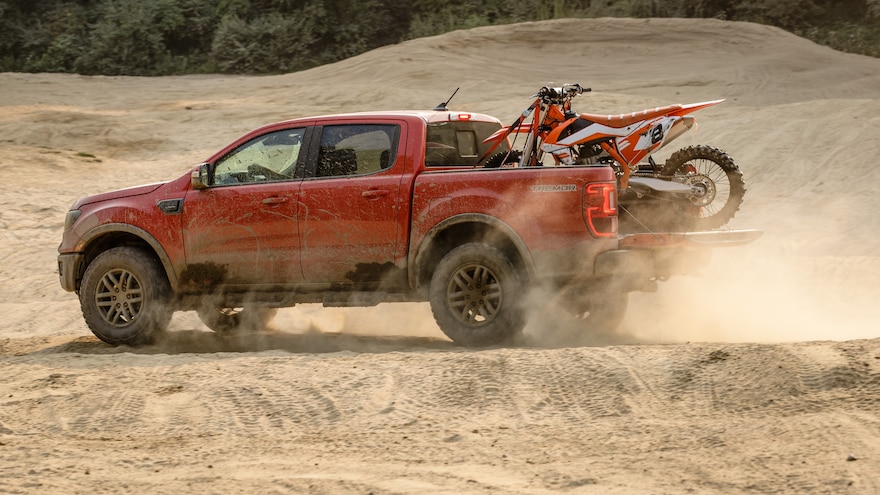