Nissan’s 400-hp Armada tows 8,500 pounds and is loaded with technology. 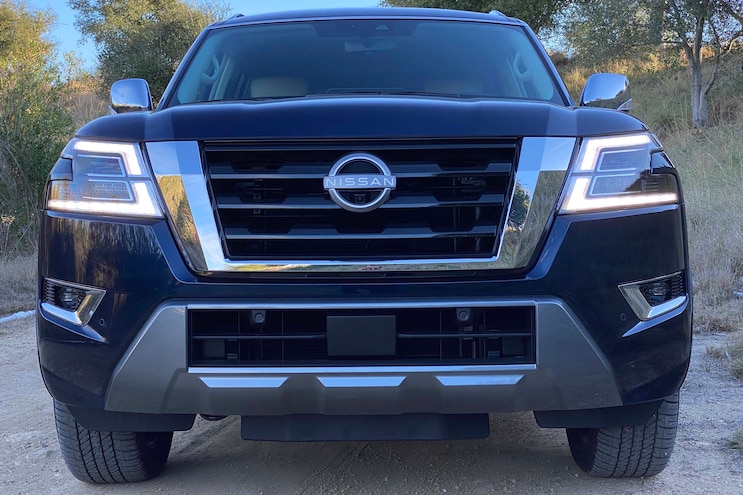 The large SUV market is a crowded and competitive place to be these days, especially with the recent redesign of the Chevy Tahoe/Suburban and GMC Yukon on new independently suspended platforms. However, there is one option that seems to be underrated in this class and deserves a look, and that's Nissan's Armada.

Based on Nissan's incredibly successful and popular global Patrol platform, the big SUV has solid credentials and retains body-on-frame construction, a fully boxed frame, and independent suspension. The '21 model is the recipient of midcycle freshening that aims to make the Nissan's largest SUV offering even more appealing and distinctive.

The '21 Armada benefits from a visually tweaked front clip (fenders, bumper, hood, and grille) that brings the family resemblance more in line with the Titan, which was refreshed for '20, and uses 50 LEDs per side for signature styling and impressive light output. The rear of the Armada also gets similar modifications with new LEDs that have a diffused, soft glow for a more premium look. 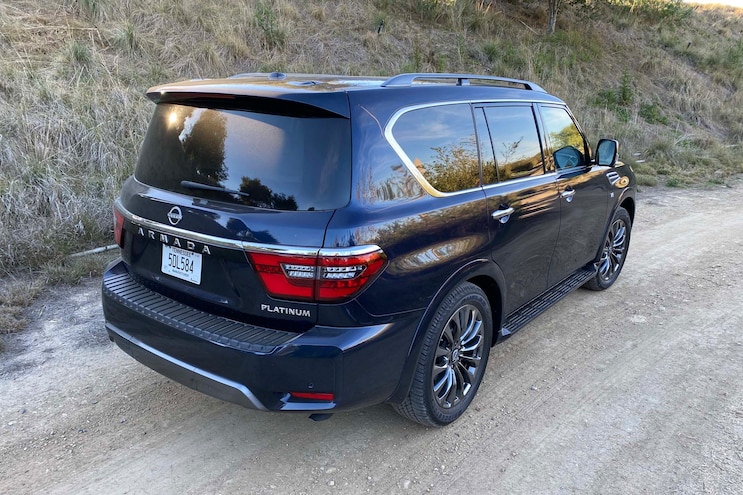 Other changes for '21 include an update that allows the Armada's 5.6L Endurance V-8 to now deliver 400 hp and 413 lb-ft of torque on premium fuel, giving the Armada the most powerful standard V-8 in its class. For those who want to run regular fuel, Nissan still maintains that capability, but with a rating of 390 hp. Backed by a JATCO seven-speed automatic transmission and an optional full-time four-wheel-drive system, the Armada is surefooted and holds the highest tow rating in the segment at 8,500 pounds.

We recently had a chance to get behind the wheel of the new Armada Platinum for a day, and we were impressed from the moment we slid into that big, cushy driver's throne. Everything we've always enjoyed about the Armada still holds true, such as a quiet, isolated ride, commanding seating position, and a smooth, powerful drivetrain. Finding a comfortable driving position is simple with the adjustment offered by the standard 10-way powered driver's seats. But it's the immense amount of tech and the luxurious improvements to the Armada that really turns it into a competitive offering for 2021.

Inside, the Armada continues to offer a cavernous cabin, overstuffed chairs, and excellent visibility. If you've driven an Armada, you will continue to appreciate clear, legible gauges and good ergonomics, but the '21 version features a redesigned center stack that has been cleaned up with a 12.3-in screen (1920 x 720 resolution) that offers both touch and remote physical input from the console.

From the aforementioned 12.3-in screen with wireless Apple CarPlay (Android Auto requires wires) to the wireless phone charging, the new center stack is contemporary, clean, and uncluttered, addressing an issue that that was a common criticism of the previous version. The Armada takes advantage of Nissan Connect, Nissan's connected-car services, and also has a Wi-Fi hotspot. Both USB-A and USB-C ports are available to the first two rows. Nissan also offers the Intelligent Around View Monitor camera system for that awesome overhead look at your surroundings, an excellent rear-seat entertainment system with HDMI inputs and dual 8-inch screens, and an update to the Intelligent Rearview Mirror system. A 13-speaker Bose system is loud and clear and urges you to enjoy your music at the high end of the volume dial. 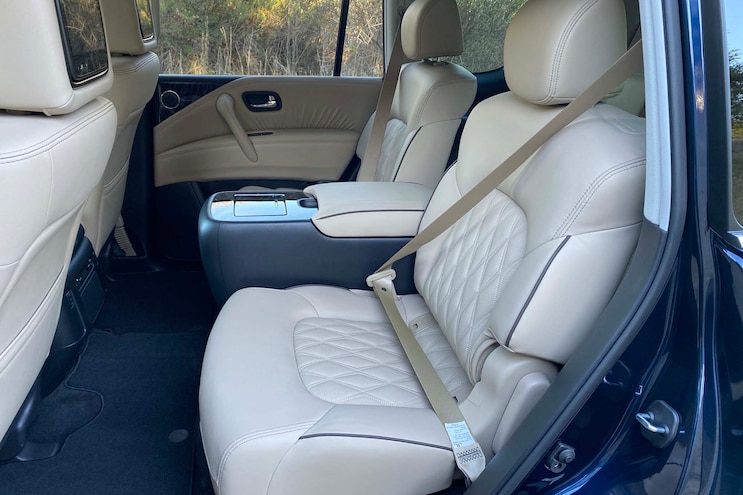 Standard safety equipment includes the Nissan Safety Shield 360 suite of technologies that includes automatic emergency braking with pedestrian detection, blind spot warning, rear cross-traffic alert, lane departure warning, High Beam Assist, and rear automatic braking, along with Intelligent Lane Intervention, Intelligent Forward Collision Warning, and blind spot intervention. What this means is that Armada is a safe choice and it all adds up to a vehicle that is less fatiguing and more pleasant to pilot on those lengthy road trips.

The Armada is also a pleasure to ride in. Our model was a Platinum with second row captain's chairs that are every bit as comfortable as the first-row thrones and leave plenty of legroom for the second-row passengers, including those little ones riding along in car seats. The third row is also comfortable enough for longer trips, although storage behind the third row is at a premium with the rear sets up. When not carrying people in the back row, the power split bench can be stowed at the push of a button.

We got to take Nissan's big SUV down some dirt roads, and even with the 22-inch wheels, the ride was still compliant, and the four-wheel-drive system always had plenty of traction. As advanced as the Armada's four-wheel drive's traction control system is, we do wish Nissan would offer an off-road package based on some of the Patrol's parts, including the lockers, along with more aggressive tires with more sidewall, and upgraded shocks (and minus the running boards). We think Nissan could really take the Armada to the next level by having a comprehensive package for those who need a large SUV that can fit their entire family on a backcountry adventure.

Although we didn't get a chance to tow on this test, we have towed with the Armada in the past and have found it a capable tower. We imagine the '21 is every bit as good, but we welcome the addition of the integrated trailer brake controller and trailer sway control.

The 2021 Nissan Armada is available in SV, SL, and Platinum trim levels, along with a Midnight Edition package on SL grades. An S grade will be available later in the year. If you are in the market for a fullsize family hauler, the '21 Nissan Armada is worth a look. It just might surprise you with its a solid mix of tech, luxury, safety, and capability.