The Truck That Needn’t Exist When the folks from GMC called up and said they had a 2019 Sierra 1500 SLT in the fleet and asked if we'd like to give it a try for a couple of weeks, we naturally jumped at the chance. In our mind, what was headed our way was a 5.3L V-8-powered pickup with a cloth bench seat and few options. We get loaded-to-the-max Denali pickups all the time, so this was going to be refreshing. Or so we thought.
What actually showed up was closer to a "Denali Lite" than the utilitarian SLT we had been imagining. This truck was fully loaded, stuffed with the full suite of tech features, and it had the 6.2L V-8 engine and 20-inch wheels. The total price with all options ran up to nearly $63,000—only a few grand shy of Denali territory. Nonetheless, we graciously accepted the keys and set off on a 1,000-mile road trip hoping to reinforce all the things we already loved about the 2019 Sierra 1500. 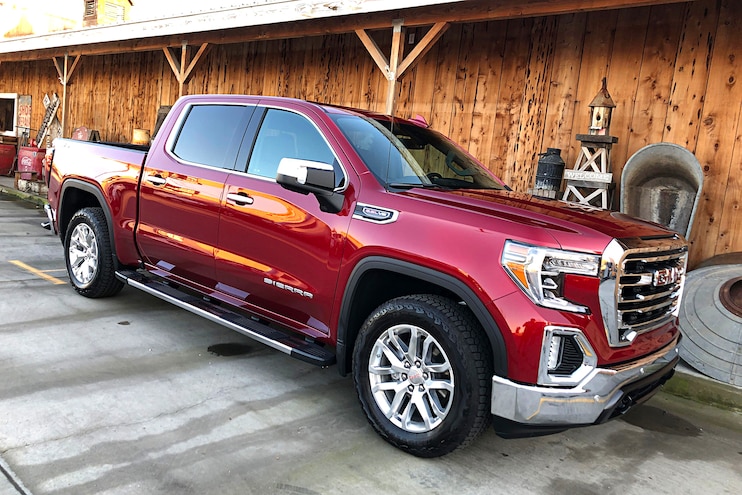 View Photo Gallery | 29 Photos
Photo 2/29   |   2019 GMC Sierra 1500 SLT
Overall, we're big fans of the new Sierra 1500. We love the exterior styling, and the truck painted in Red Quartz (a $495 option) drew compliments nearly everywhere we went. The new interior styling is mediocre, but we've thoroughly beat that horse, so there's no need in continuing. Despite appearance, the seats are quite comfortable, even on long trips, and the cab is more than spacious enough for four adults and a large toddler car seat. The 6.2L V-8 engine is powerful, and the new 10-speed automatic transmission shifts gears eloquently. 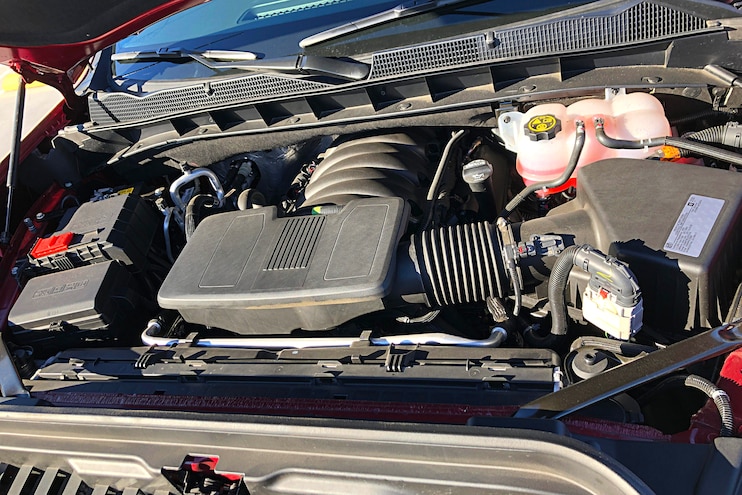 View Photo Gallery | 29 Photos
Photo 3/29   |   2019 GMC Sierra 1500 SLT Engine
Missing from the "Denali Lite" SLT trim is the adaptive suspension offered on Denali, and really, we didn't miss it much. Highway ride is fantastic, as is handling on twisty two-lane roads. We didn't have a chance to venture off-road, but with 20-inch wheels and street tires, we didn't have a desire to. We also didn't get the opportunity to hitch a trailer up to the truck on this particular test, however, we did note this model had a maximum tow rating of 12,255 pounds and a max payload rating of 1,755 pounds. Both of these are impressive numbers from a crew-cab four-wheel-drive 1500 and are validated by the VIN-specific trailering information tag affixed to the doorjamb.
Also standard on SLT (along with AT4 and Denali) is the wonderful MultiPro tailgate. The more we use the MultiPro, the more we love the concept. Even tasks as simple as reaching in for a piece of luggage or a stroller are made easier by this tailgate. It's also a great conversation starter, as we had the opportunity to do the demonstration of the gate's multiple configurations at least a dozen times. 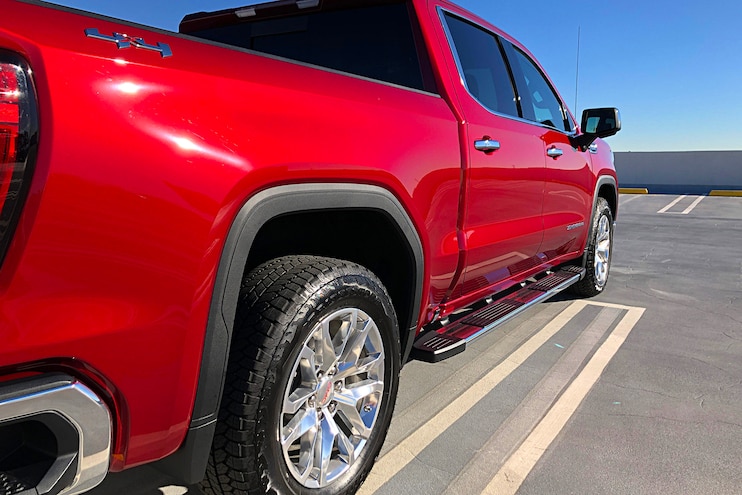 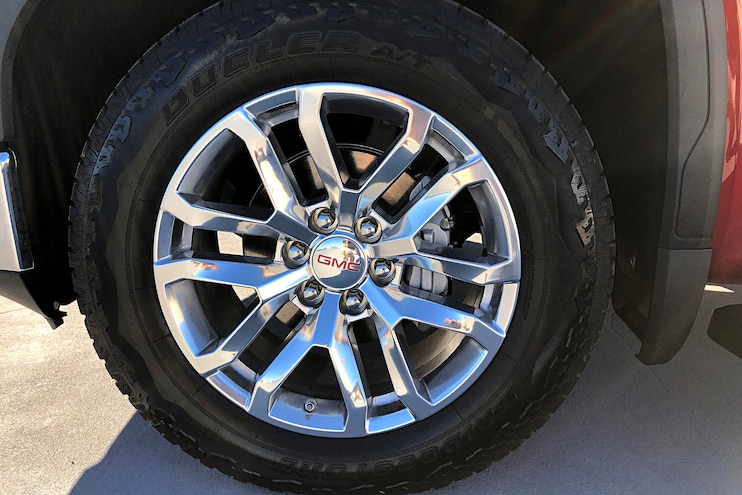 View Photo Gallery | 29 Photos
Photo 5/29   |   2019 GMC Sierra 1500 SLT Wheel
Another area of the 2019 Sierra 1500 that has continued to impress us is its fuel economy. It's not often a truck can live up to its EPA rating, which we still don't fully understand, but that's a conversation for another day. But the Sierra did just that. We had a tank of mostly highway miles that averaged out to 20 mpg and had a combined test average of 18.61 mpg.
Although it wasn't quite the road test we were hoping for, we left with a continued appreciation for the new Sierra 1500 and a load of questions as to why a $63,000 SLT even exists. Hopefully we'll get our work truck fix next time. 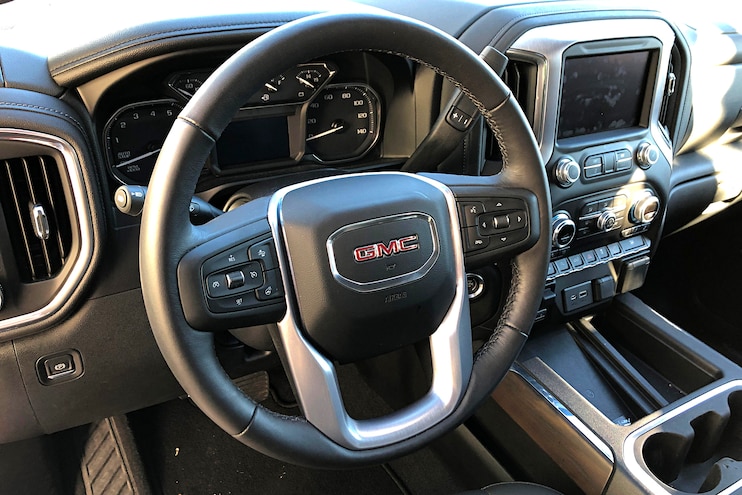 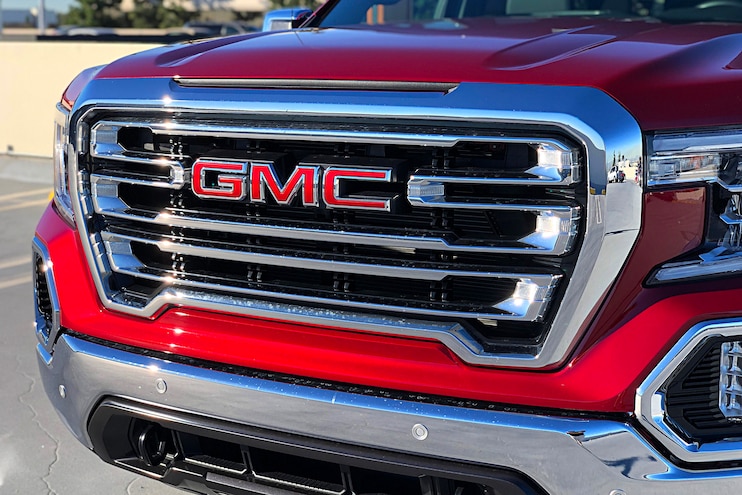