The Best-Selling Porsche Is An … SUV? 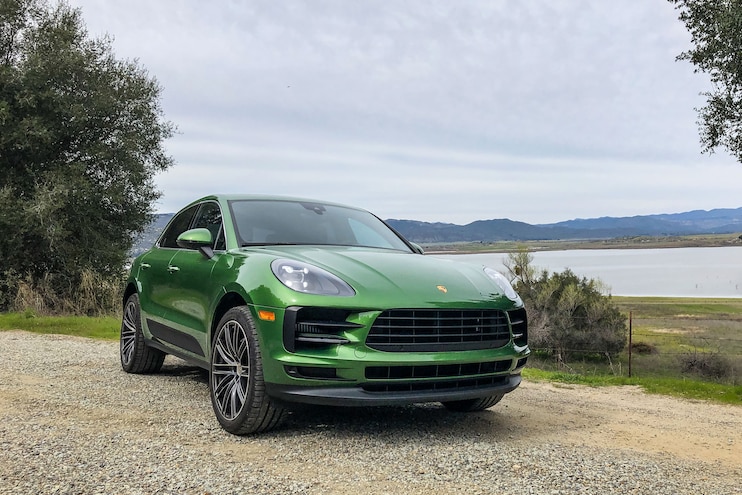 Sit back and close your eyes for a minute. Now, think about Porsche and what first comes to mind. We bet there were visions of 911s and 718s dancing through your head like sugarplums at Christmas time. Back in reality, would you believe us if we told you that Porsche's best-selling vehicle in the U.S. is not a sportscar but rather a midsize SUV? That's right, the Macan is the best-selling vehicle in the luxury automaker's stable.
Porsche first introduced the Macan concept in 2011, and U.S. production models started arriving in dealerships in late 2014 as 2015 model year vehicles. Since its introduction, the Macan has gone on to sell almost 30,000 units a year in North America and about 100,000 more globally. To get a taste of Macan for ourselves, we spent a week with the refreshed 2019 Porsche Macan S. 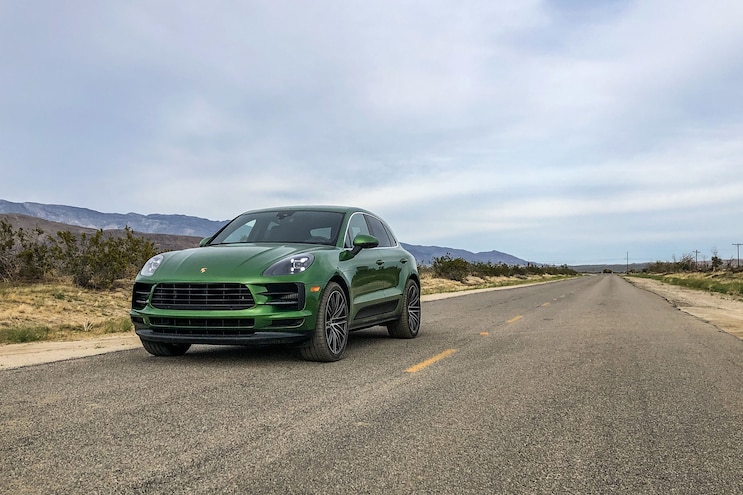 View Photo Gallery | 19 Photos
Photo 2/19   |   2019 Porshe Macan S Daily Driven
The 2019 Porsche Macan comes in two flavors: Macan and Macan S. The Macan comes equipped with a 2.0L turbocharged I-4 engine that produces 248 hp and 273 lb-ft of torque. The Macan S is fitted with a 3.0L turbocharged V-6 churning out 348 hp and 354 lb-ft of torque. Both are fitted with all-wheel drive, and only Porsche's seven-speed PDK dual-clutch transmission is offered. 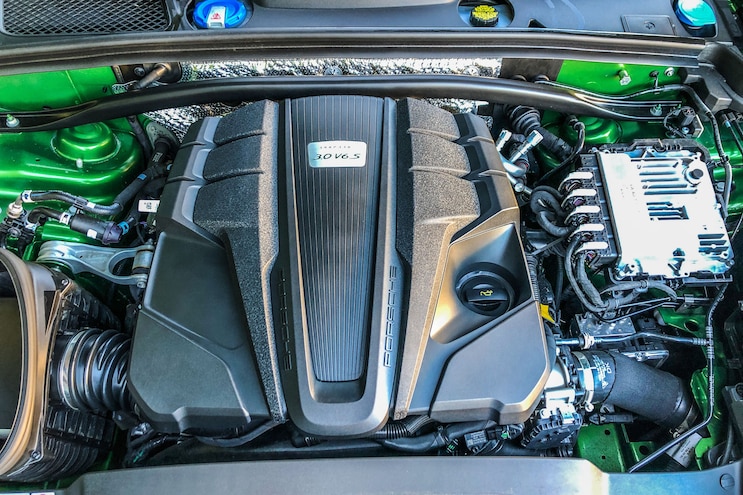 View Photo Gallery | 19 Photos
Photo 3/19   |   2019 Porshe Macan S Daily Driven Engine
Our tester was a 2019 Macan S painted in the vibrant Mamba Green Metallic. Options included adaptive air suspension, Porsche Torque Vectoring Plus (PTV+), 21-inch 911 Turbo Design wheels, the Sport Chrono package, sport tail pipes, heated front seats, auto-dimming mirrors, lane change assist, and Apple CarPlay. These options push the price from a base of $58,600 to an as-delivered price of $74,650.
The short time that we spent with the Macan S was an absolute joy. After spending a few minutes figuring out what all of the buttons on the dash and console controlled (seriously, it has an absurd number of buttons), we set off for a quick cruise. That cruise took us through city streets, open highway, desolate desert roads, and twisty mountain tarmac. We found the 348 hp produced by the Macan S' V-6 engine to be plenty for the 4,200-pound family hauler. Porsche claims a 0-60 time of just 4.9 seconds for the Macan S with the Sport Chrono package, and we fully believe it. Top speed is an electronically limited 157 mph, but the highest speed limit we found was 70 mph, so we'll take Porsche's word on this, as well. 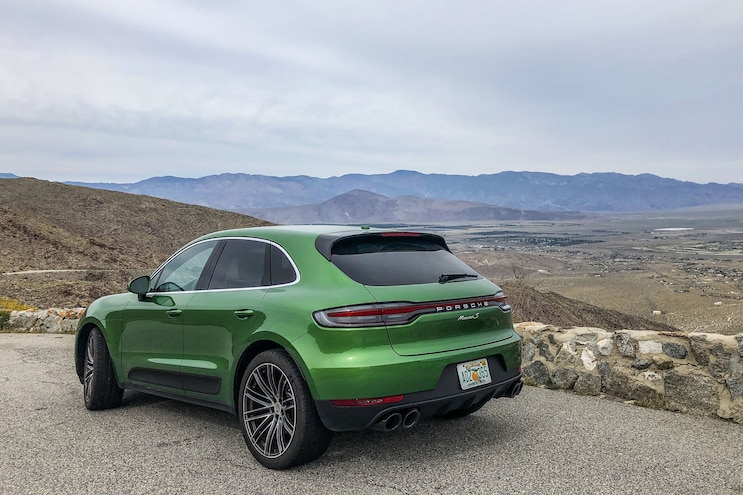 View Photo Gallery | 19 Photos
Photo 4/19   |   2019 Porshe Macan S Daily Driven Rear 3q
On the twisty mountain roads in Sport mode, the Macan S hung to the road like a gecko on a hot rock. The all-wheel-drive system worked wonders while the sticky, asymmetrical (fronts are narrower than the rear) tires clawed away at the asphalt. Back on the highway, the Macan S settles into a comfortable rhythm, which shows off the vehicles more luxurious side. No matter the scenario, we loved the shifting from the vehicle's seven-speed dual-clutch gearbox. Shifts were firm when they needed to be and smooth when they weren't. And it always seemed to find its way into the proper gear for the situation.
The presence of an off-road mode is still a bit confounding to us. We understand that most SUVs in this size class have some sort of off-road mode and that people love to get to the great outdoors. However, do Porsche owners with vehicles riding on 21-inch wheels really want or need this ability? Either way, we tested it out. The extra ground clearance from the adjustable air suspension was nice, as was the retuned throttle response. But anything more than a slight crawl on flat dirt left us beyond scared for the tire's sidewall. If there's one feature we'd be OK not having, it's this one. 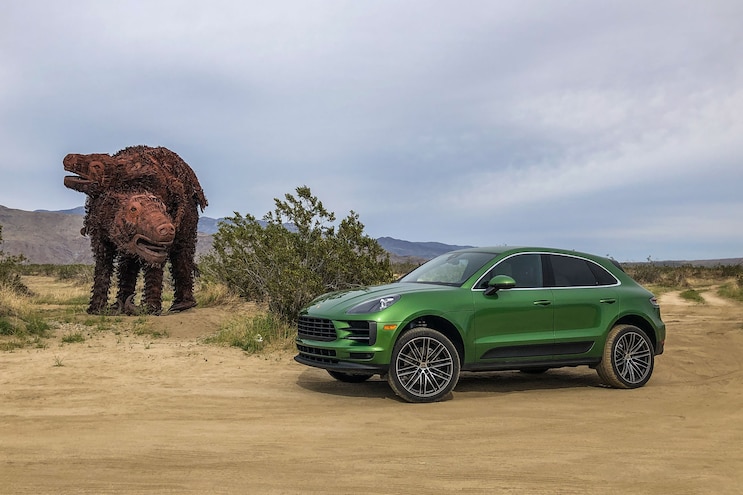 View Photo Gallery | 19 Photos
Photo 5/19   |   2019 Porshe Macan S Daily Driven 3q
Inside the cabin, we found the most noticeable update for the 2019 model year. A new 10.9-inch full-HD touchscreen has taken center stage and replaced the old 7.2-inch model. Navigating the system was easy and mostly intuitive thanks and the addition of Porsche's Porsche Communication Management (PCM) system, which was nifty indeed. However, these are features we'd need to spend a lot more time with to truly appreciate. Sound quality was decent, and the navigation system worked quite well. We're intrigued that Apple CarPlay is still optional and not standard, and there's no mention of Android Auto (though we're OK with that being Apple fans). 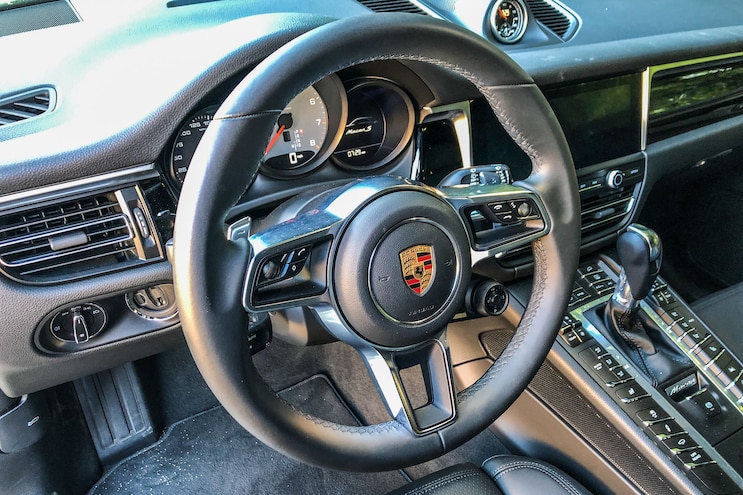 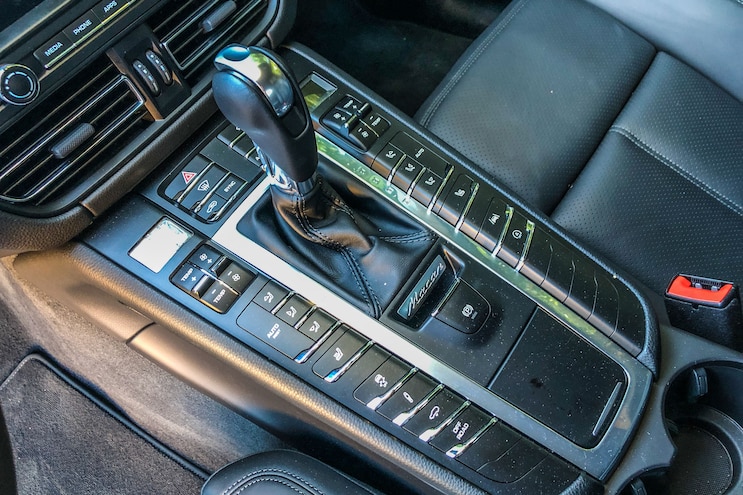 View Photo Gallery | 19 Photos
Photo 7/19   |   2019 Porshe Macan S Daily Driven Interior
Seat comfort was good, as we were able to comfortably carry four adults or two adults and two children in car seats. Storage space is on par for the class, which is to say it's not overly abundant. We had plenty of room for gear needed to cart around two kids, but trying to take four adults for a weekend trip would require some strategic packing.
Overall, our short time with the 2019 Porsche Macan S was a delight. The vehicle has a distinct design that drew compliments and long stares everywhere we went. It also has the perfect amount of performance and refinement, equally competent cruising the interstate or ripping up twisty two-lanes. And probably most impressive, through our mix of driving we still managed to achieve almost 20 mpg. Taken all together, it's easy to see how the Macan has quickly risen through the ranks to become Porsche's best-selling vehicle.