No Lockers and No Low Range, But a Whole Lot of Gumption! 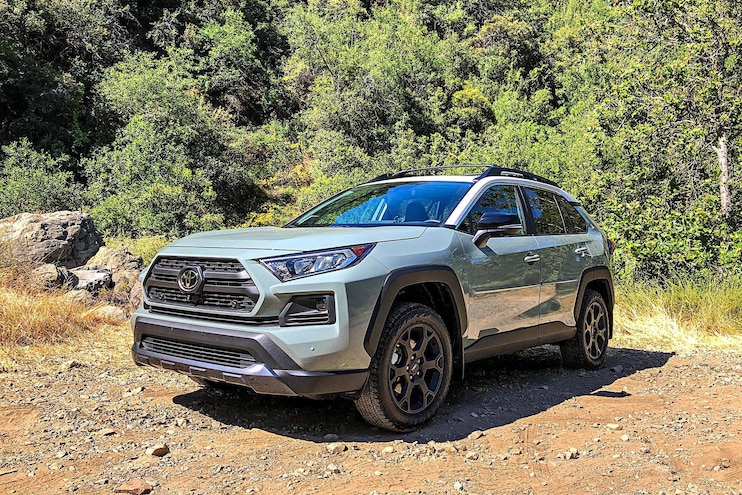 We are firm believers that there should be an off-road version of every truck and SUV model. How extreme it should be varies between models, but at the very least the vehicle should be able to get you comfortably down a dirt road and into the backcountry. "Comfortably" is the key word there, because as we all know nothing off-roads better than a rental car.
In 2019 Toyota introduced an all-new fifth-generation RAV4. The RAV4 had previously been the best-selling non-pickup vehicle in the United States. And with this new generation it regained that title. With the launch of the 2019 RAV4 came the new Adventure model, which had a taller ride height, more ground clearance, and torque-vectoring all-wheel drive. It was a properly decent vehicle for those who occasionally needed to get down a dirt driveway or snow-covered road. For those wishing to do more serious exploring, however, its soft styling and street-oriented tires left something to be desired. 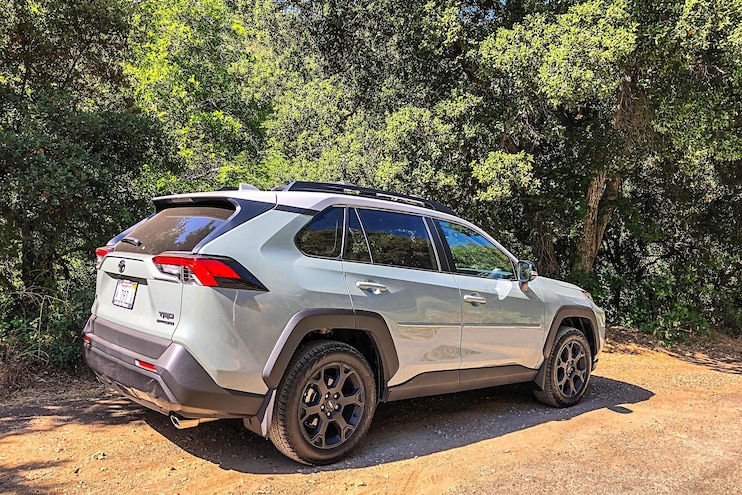 View Photo Gallery | 32 Photos
Photo 2/32   |   002 2020 Toyota Rav4 Trd Offroad
Enter the 2020 RAV4 TRD Off-Road. Building on the RAV4 Adventure's competent bones, the TRD Off-Road takes RAV4's off-road prowess to the max. No, it still doesn't have a two-speed transfer case with a low range, but it doesn't need one. It also doesn't come with any locking differentials, like, say, a Range Rover Evoque would (for double the cost, mind you). What it does have are grippy all-terrain tires, a great all-wheel-drive system, and a whole lot of gumption.
The TRD Off-Road RAV4 rides 1.5 inches taller than its non-off-road brethren and is about a half inch wider and longer. It also weighs about 35 pounds more than an equivalent Limited. Payload for the TRD Off-Road is a modest 1,050 pounds, meaning four large men will max it out (but really, when are four big dudes going to cruise around in a RAV4?), but a family of four can easily haul enough gear for a weekend adventure with payload to spare. Towing has also been increased for the RAV4 TRD Off-Road from the standard 1,500 pounds to an impressive-for-the class 3,500 pounds. This means when equipped with a trailer hitch receiver, you can bring your overland trailer or UTV along for the adventure. 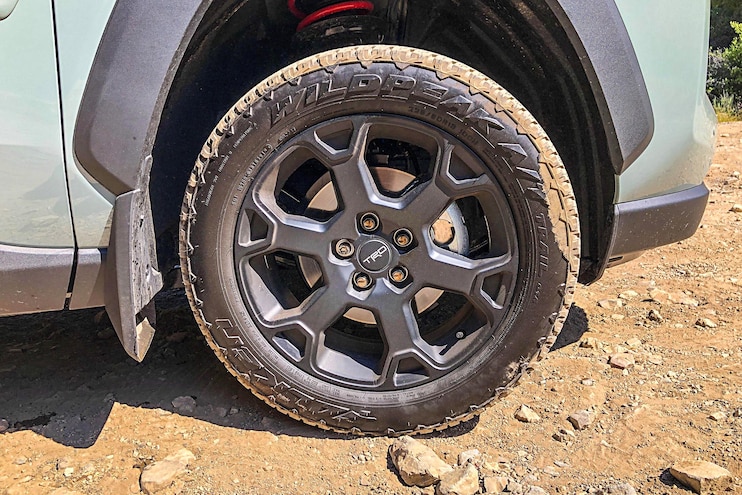 View Photo Gallery | 32 Photos
Photo 3/32   |   011 2020 Toyota Rav4 Trd Offroad
The TRD Off-Road is available only with the 2.5L I-4 engine, which produces 203 hp and 184 lb-ft of torque. You really have to rev the engine to get the most out of it, however, as peak horsepower doesn't hit until 6,600 rpm, and torque peak is a relatively high 5,000 rpm. The engine is backed by an eight-speed automatic transmission, which we found extremely pleasant during our short time with the vehicle. All-wheel drive is standard on the TRD Off-Road model, naturally, and it comes with Toyota's high-tech torque-vectoring system. Multi-Terrain Select is also standard, giving the driver a choice of either Normal, Mud & Sand, Rock & Dirt, or Snow drive modes. Also standard are hill start assist control, trailer sway control, and downhill assist control. We'd love to see an iteration of crawl control find its way onto RAV4, but we'll save that request for the TRD Pro model hint hint. 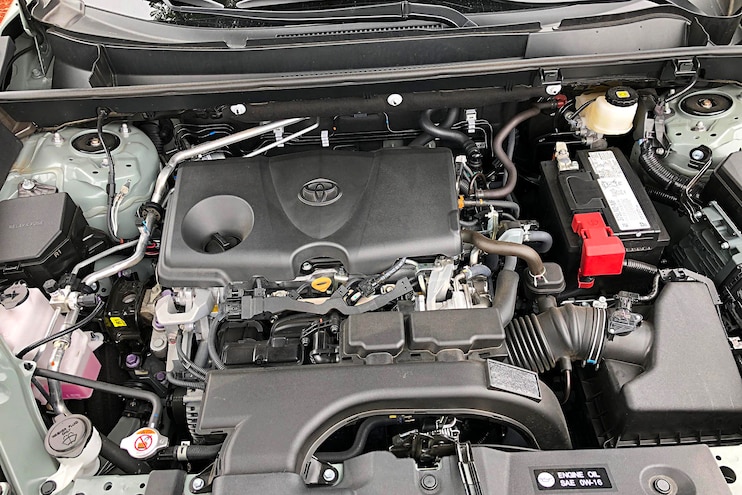 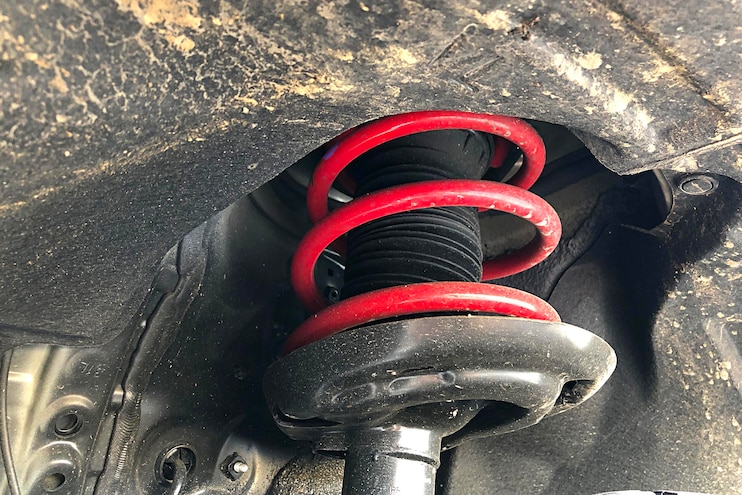 View Photo Gallery | 32 Photos
Photo 5/32   |   032 2020 Toyota Rav4 Trd Offroad
Falken all-terrain tires are what really enable the RAV4 TRD Off-Road to venture farther than the Adventure model. These tires have a unique tread pattern that was specially designed with the RAV4's unique needs in mind. The Falken Wildpeak A/T Trail tires feature a squared-off shoulder design that help guard against punctures and large, open shoulder grooves to help shed mud and debris. They also carry the three-peak mountain snowflake symbol to denote their severe snow rating. Despite their aggressive tread pattern, we noticed no additional road noise inside the cabin. And true to their nature, the tires worked very well in loose dirt. We didn't have a chance to test them in mud or snow, but we're pretty certain the RAV4's low ground clearance will become a hinderance before the tires do. And we love the look of the 18-inch TRD wheels (though we wish they were 17s for some additional sidewall), which are flow-forged for higher rigidity and lower weight.
The RAV4 TRD Off-Road slots in the lineup just below the top-tier Limited model. As such, it's packed with standard and optional features. Toyota Safety Sense 2.0 is standard on all 2020 RAV4 models and includes a ton of features, such as adaptive cruise control and lane tracing assist. Adding the TRD Off-Road Weather package brings heated and cooled seats and rain-sensing windshield wipers. The Premium Audio package adds an 11-speaker, 800-watt JBL audio system to the standard 8.0-inch touchscreen infotainment system. And the TRD Off-Road Technology package provides front and rear parking sensors, a bird's-eye 360-degree camera, a rearview camera mirror, and a wireless phone charging pad. 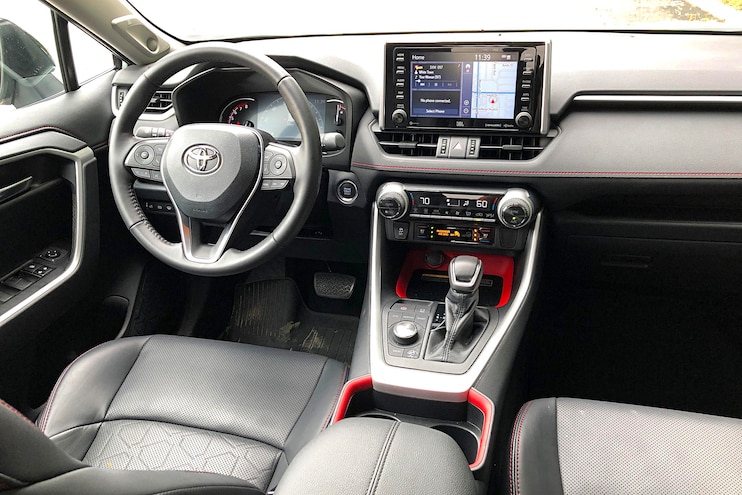 View Photo Gallery | 32 Photos
Photo 6/32   |   012 2020 Toyota Rav4 Trd Offroad
We were totally happy to have all of these accessory packages. We loved having the cooled seats (though they could have been a bit more aggressive). The JBL audio system was the best OEM Toyota stereo we've ever heard. And the 360-degree camera was incredibly helpful, though we do wish the camera resolution were a bit higher. Although we typically love rearview camera mirrors, this particular one proved too close to our face for our eyes to properly adjust. That's really just personal preference, though, as the quality of the image was quite good.
The interior of the RAV4 Off-Road is quite nice. We enjoyed the red accent stitching, and the SofTex seating material was a fair bit more comfortable than in the Highlander we recently tested. Space is tight, but that's to be expected given the class. With two child's car seats in the back, we lost a bit of legroom in the front, but not enough to really be uncomfortable. And behind the seats was plenty of room for gear.
So, the big question, how well does it off-road? To really answer that we have to take a holistic view of the vehicle and the class that it's in. A TRD Pro 4Runner it is not. And there are a lot of people that would judge it, unfairly, against 4Runner. The RAV4 TRD Off-Road is not a rock crawler, it's not a mud bogger, and it's not fit for mashing large whoops. What it is is extremely capable of getting to and from your favorite hunting, fishing, biking, camping, or kayaking spot. On graded dirt roads it's fantastic. The all-wheel-drive system works great for keeping forward momentum on loose dirt, and the TRD-tuned springs and shocks ensure that occupants are comfortable. The bigger the bumps and ruts, the slower you'll need to go to keep from damaging skidplates, backs, and kidneys. But will it get you there, through sand, snow, slop, and slush? Absolutely. Are you going to be breaking backwoods trails and crawling over boulder? Absolutely not. What the RAV4 TRD Off-Road has is gumption, a willingness to keep pressing on and triumph over adversity. Work the throttle, use the multiterrain modes, and pick a smart line, and the RAV4 will go just about anywhere you point it. Within reason, of course. 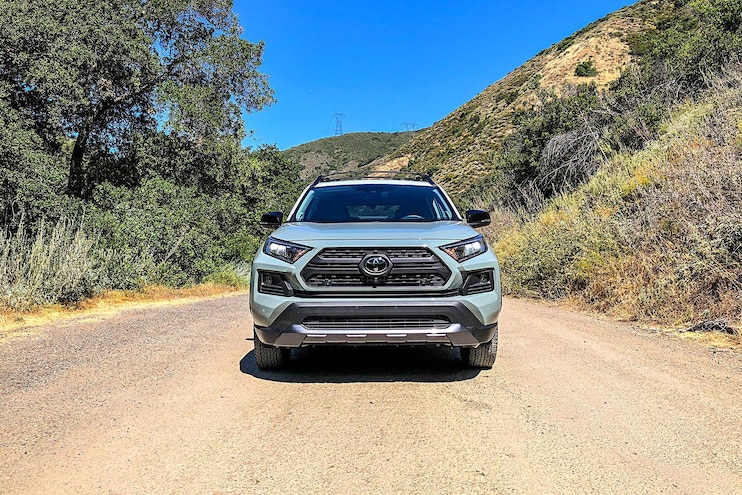 View Photo Gallery | 32 Photos
Photo 7/32   |   005 2020 Toyota Rav4 Trd Offroad
Overall, we enjoyed our time with the 2020 RAV4 TRD Off-Road. It was quiet and composed on the highway, comfortable on dirt roads, and all-around easy to live with. For the adventure-minded buyer looking for a compact SUV, we certainly advise them to add the RAV4 TRD Off-Road to the mix.
PS thank you Toyota for not putting red tow hook on it. We are grateful.