Going fast in a Jeep never felt so good. 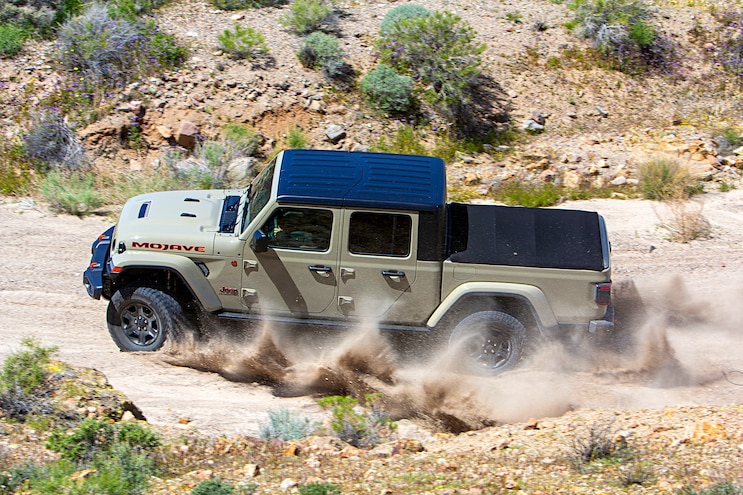 When Jeep launched the Gladiator for 2020, it hit the market with all standard Jeep offerings: Sport, Overland (analogous to Sahara on Wrangler), and the Rubicon. However, there was a hole in the lineup, and we knew it wouldn't be long before Jeep jumped into the field of performance midsize pickup with a variant aimed to run tire to tire with the likes of the Chevy Colorado ZR2 and Toyota Tacoma TRD Pro.
Enter Mojave. A go-fast version of the Gladiator made for mobbing down desert washes and whooped-out two tracks common to the desert landscape. Although the Rubicon is geared more toward the crawling crowd, the Mojave enjoys a list of upgrades to make it withstand running high speeds in the harsh and abusive terrain of the desert. For example, the Mojave package adds reinforcements to the frame, huge 2.5-inch Fox internal bypass shocks, front Fox hydraulic jounce bumpers, and upgraded axles with cast iron knuckles (replacing the aluminum knuckles on the Wrangler and Gladiator Rubicons). The front suspension, like the rear, uses links and coils (progressive in the rear) and is lifted one inch to provide additional jounce travel. Front shock reservoirs are mounted remotely under the front bumper and are protected by an aluminum skid plate. A half-inch wider track, provided through wheel offset, works with the 33-inch Falken Wildpeak A/T tires to increase chassis stability. Falken Wildpeak M/Ts are an option for those looking for a more aggressive tread out of the box. 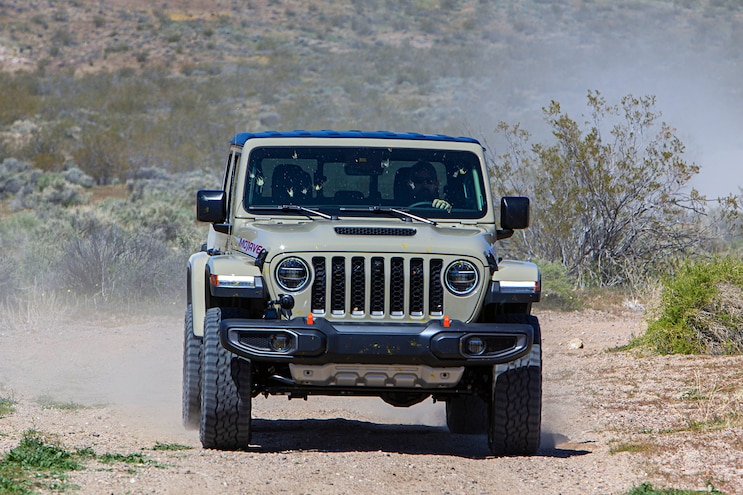 Drivetrain-wise, the Mojave retains the familiar 3.6L Pentastar gas V-6 as standard equipment, while the 3.0L EcoDiesel V-6 diesel will become an option later this year. A six-speed manual transmission is standard on the Pentastar, while the EcoDiesel gets a standard 8-speed automatic transmission. An 8-speed auto is optional on the gas engine. In place of the Rubicon's 4:1 NV241OR Rock-Trac transfer case is the standard NV241 from the Sport and Overland with 2.72:1 gearing, allowing for higher speeds in low range. Crawl Ratio is 57.3:1 with the manual and 52.6:1 with the automatic on gas trucks. We've confirmed gas trucks get the same 4.10 final drive ratio as Rubicons, but we would imagine that the EcoDiesel version will get the same 3.73s as the JL Wrangler, though at the time of this writing those details haven't been announced yet.
In addition to the hard parts, Jeep took time to wrangle the electronic nannies that can obstruct the high-speed, off-road driving experience of an otherwise great chassis setup. The Off-Road Plus mode, modified for Mojave, is activated with the simple press of a button and adjusts throttle response, transmissions shift points, and traction control to allow for more wheel slip and driver control. In OR+, drivers will notice additional wheel slip is allowed. This helps the vehicle to maintain momentum as the tires chew through soft sand without unnecessary vehicle intervention. 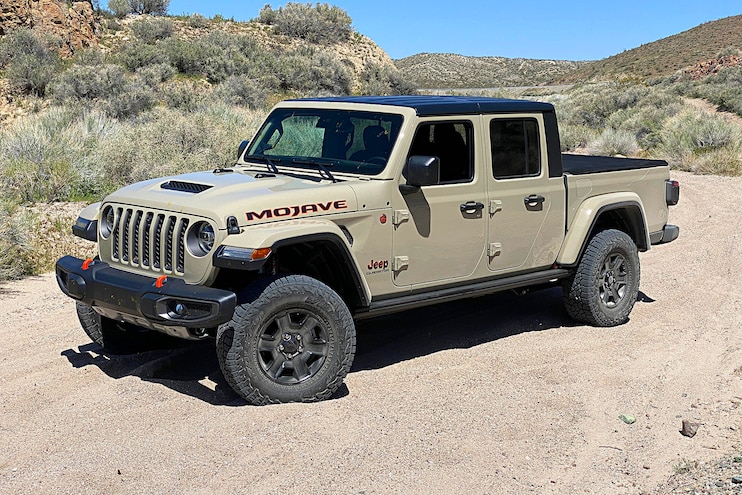 View Photo Gallery | 41 Photos
Photo 3/41   |   003 Jeep Gladiator Mojave First Drive
Mojave-unique bits don't end at the chassis, as the interior gets a few subtle upgrades that include a wonderfully sculpted steering wheel, worthy of placement in an SRT Grand Cherokee and enhanced front seats with integrated upper bolsters and Mojave logos, available in either cloth or leather. Red accents and stitching on the Rubicon is replaced with orange on the Mojave.
Along with all of the upgrades comes a new "Desert Rated" designation, replacing the Trail Rated designation found on most Jeeps. Desert Rated was developed to validate the Mojave's high-speed performance and off-road capability in grueling desert and sand environments. Jeep built the Desert Rated criteria around five categories: 1) Ride Control and Stability, 2) Traction, 3) Ground Clearance, 4) Maneuverability, and 5) Desert Prowess.
The Mojave is the first Jeep product to use the designation, but you can bet it won't be the last. As part of the development, Jeep engineers tested the Mojave's durability against these categories at the company's Yucca Proving Grounds in Arizona with a specially developed Baja-style durability course, as well as on various trails throughout the U.S. and Middle East. 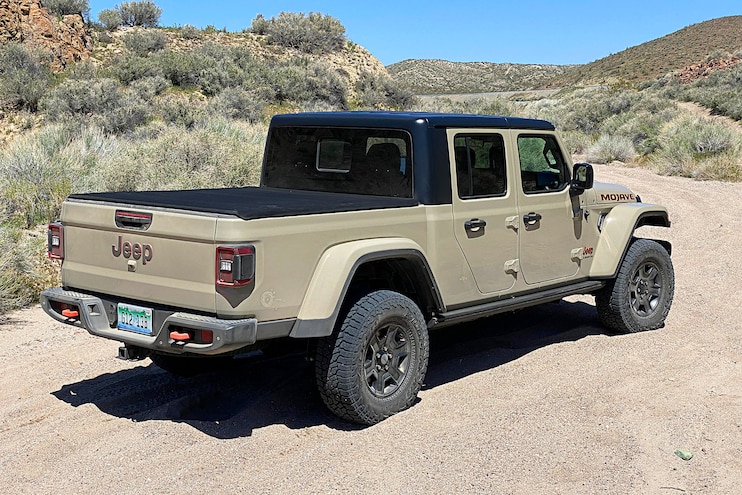 On the outside, the quickest way to tell a Mojave from the Rubicon is the orange tow hooks and accents, the "Mojave" sticker on the hood, unique wheels, front aluminum skid plate, and those special Fox shocks peeking out from the wheel wells. The Mojave also gets its own unique hood with a hood scoop styling detail that is hard to miss. 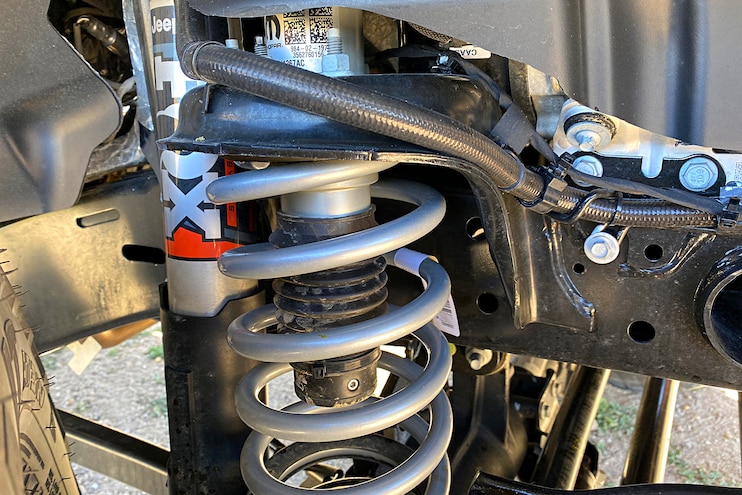 Enough about the goodies that make up the Mojave, though, because none of it matters unless the vehicle comes to life from behind that fat, sculpted steering wheel. So, we pointed our tester to the Mojave's namesake and spent a day putting Jeep's Desert Rated package through its paces.
From the initial turn on to the dirt, we mashed the go pedal, and our initial observation was that the Gladiator Mojave can attack a fast two-track with confidence. It soaks up mild to moderately sized whoops, and it doesn't skate across the tops at speed like some of the competing off-road packages do. We hit deep sandy washes, tight two-tracks, whooped out roads, and the Mojave gladly gobbled up everything we threw at it. 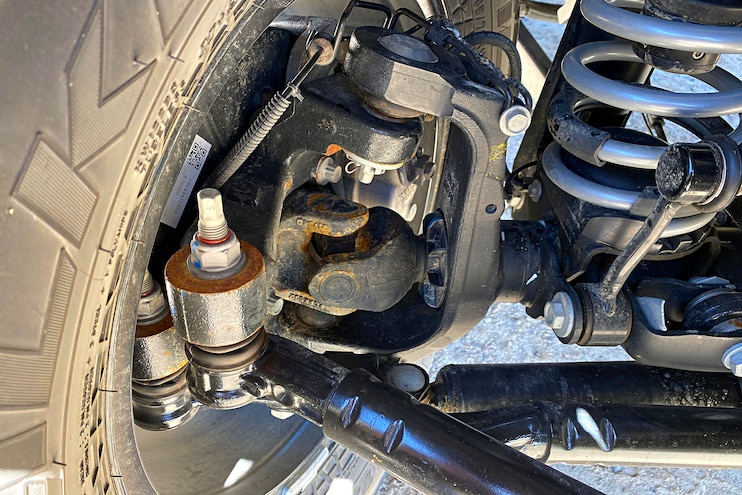 View Photo Gallery | 41 Photos
Photo 6/41   |   006 Jeep Gladiator Mojave First Drive
While we love hitting the desert in two-wheel drive, we had to shift into 4-HI in order to see if Off-Road Plus mode made a discernable difference in performance—OR+ is not available in 2-HI.
With the Mojave in four-wheel drive, it became very simply a point-and-shoot affair. Off-Road Plus did make the slightly lazy automatic transmission more responsive, and clearly, we were able to use the throttle for getting around turns more, uh, sideways. Even with all four wheels getting power, the Mojave allowed us to power slide and even rotate the rear without any noticeable protest. If an 18-foot long truck can be playful and fun on narrow two-tracks and washes, the Gladiator Mojave is that truck.
To be honest, we haven't always been fans of the tuning on the OE-versions of Fox's IBP shocks; we've knocked them for either blowing through travel too fast at slower speeds (Raptor) or not enough rebound control (Tacoma TRD Pro). The Gladiator is different, though. It feels well balanced, and we can sense the effort that was put in to get the tuning right. Coming across our first unexpected G-out, we were ready to wear the front axle on our faces. As we tensed up and blew through the event, the Mojave shrugged it off. The Fox hydraulic bump stops worked like magic to dissipate a massive amount of energy, and just like that, our gorgeous mugs were no worse for the wear. 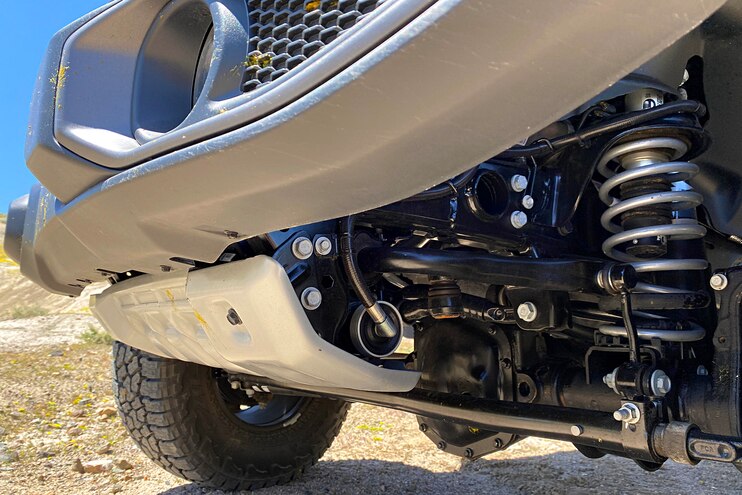 View Photo Gallery | 41 Photos
Photo 7/41   |   007 Jeep Gladiator Mojave First Drive
There has always been a hot debate in off-road circles about IFS versus solid axles in the desert for go-fast wheeling, and a case can be made for both. While IFS reigns supreme on the highest performance vehicles, you shouldn't underestimate the ability of solid axles when it comes to multiple disciplines. As anyone who traverses the desert can attest, a fast road one minute can easily become a technical rock crawl, quickly followed by another high-speed stretch, all in the time it takes to saw the wheel from one side to the other.
Beyond being simpler and arguably more durable, solid axles offer other advantages in the desert, such as constant—rather than variable—ground clearance while the suspension cycles. On the Mojave, that ground clearance is a best-in-class 11.6 inches (Colorado ZR2 comes in at 8.9 inches and the Tacoma TRD Pro is 9.4 inches, respectively), allowing the Jeep more worry-free operation when the trail devolves. 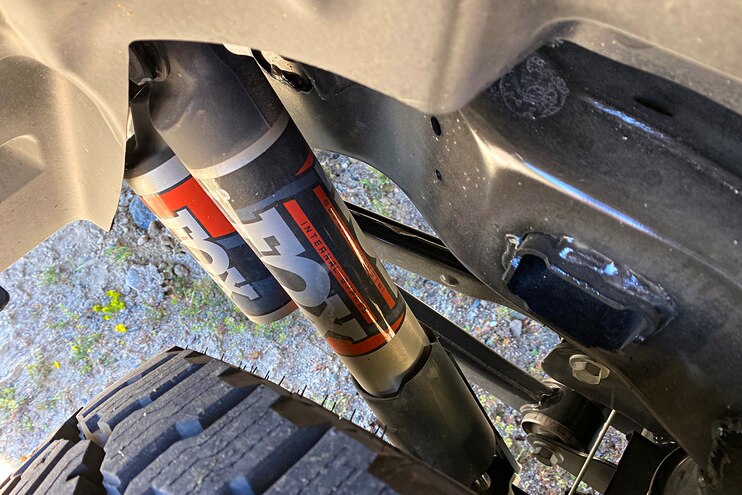 View Photo Gallery | 41 Photos
Photo 8/41   |   008 Jeep Gladiator Mojave First Drive
The Mojave is fully skid-plated underneath, unlike the Colorado ZR2, which doesn't protect the fuel tank from the factory. The Mojave also has optional rock sliders available, which is an option not offered on the Tacoma, but comes standard on the ZR2. We'd like to see Jeep step up and include sliders as standard on the Mojave package.
Another area we gave the Mojave high marks for was the solid chassis and tight body. After hours of pounding sand, as they say, we noted no squeaks or rattles from the driver's seat and were left pretty amazed with the structural integrity of the convertible truck. 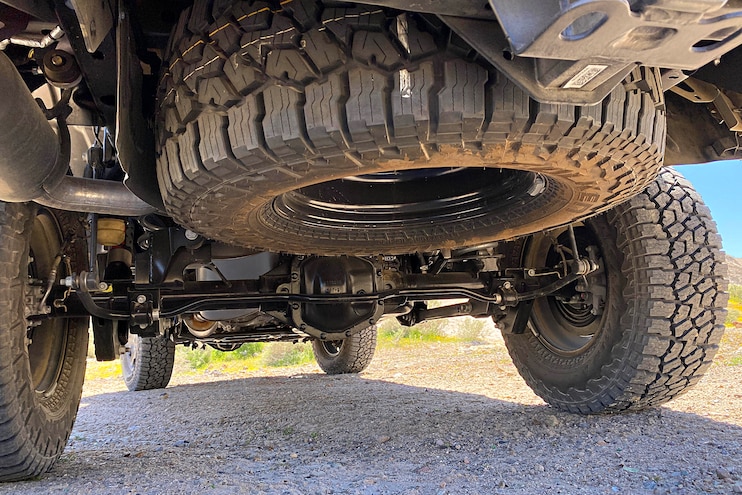 View Photo Gallery | 41 Photos
Photo 9/41   |   009 Jeep Gladiator Mojave First Drive
If we had to nitpick, of course we'd want more horsepower, as the chassis is nowhere near maxed out. We'd also like to see 35-inch tires, for no other reason than they fit, and they would allow more than a foot of running ground clearance. Are they necessary? Not in our testing, but they'd be nice to have. We also don't like that the Mojave trades in some of Gladiator Rubicon goodness for the ability to mob over ruts and dunes. Steel bumpers are not available on the Mojave, and neither is the bed slider behind the rear axle, or the front disconnecting sway bar and front locker. The sway bar getting nixed makes sense from a go-fast philosophy, but no front locker seems short-sighted.
All that being said, the Gladiator Mojave should have no problem holding its own against the other players in the market, and we can't wait to get them all together for a play date. In the name of science, of course. View Photo Gallery | 41 Photos
Photo 10/41   |   010 Jeep Gladiator Mojave First Drive
Back on the road home, the Gladiator Mojave offers a smooth and compliant ride, with no real indication of the performance potential lurking under the body. However, like other Gladiators we've tested, the Mojave still exhibits some road wander. Although it feels like there isn't enough caster, part of this could be related to the tires. What is really interesting to us though, is that the Wrangler, with essentially the same front suspension design and a shorter wheelbase, seems more directionally stable on the highway. So, it should be an easy fix for the good folks at Jeep to make. 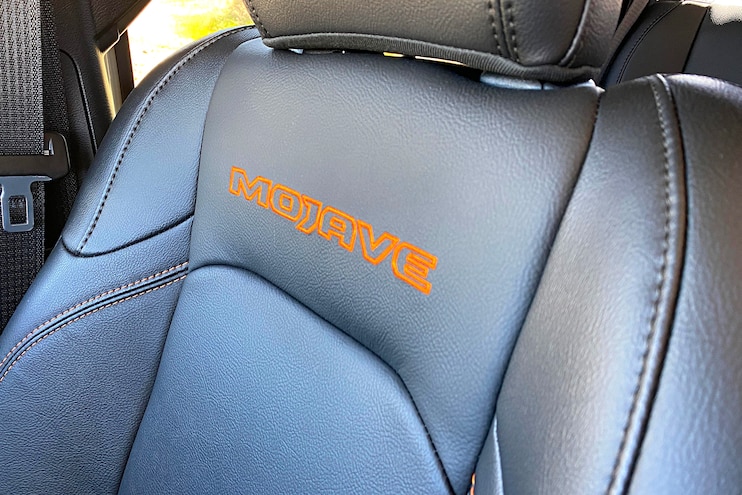 After our time in the driver's seat, one thing became clear: If you are like us, solid axle fans who also happen to enjoy going fast, you will not be disappointed with the Mojave. This Gladiator is a riot to drive in the dirt and is faster and more competent than you would ever expect.
It is exciting to see Jeep going after the off-road performance segment of midsize trucks and doing it in way that is uniquely Jeep. True to the company's heritage, Jeep has taken a suspension design wrongly criticized for being out of vogue, making it relevant, and in the process created what could be considered the highest performance solid-axled vehicle to ever leave the factory. So that begs the question, Mojave or Rubicon? All we can tell you is that it's good to have choices. 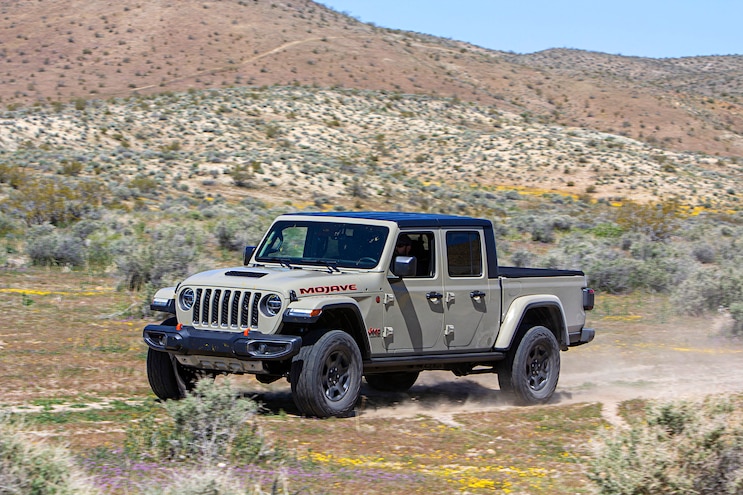